Budget designed to give Canadians "optimism and trust", not "to reach some mathematical balance," says Trudeau 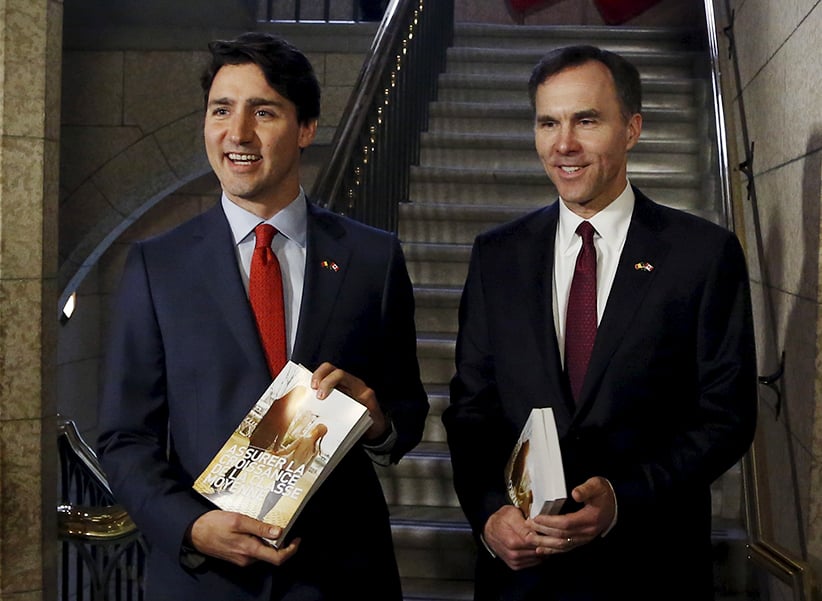 OTTAWA – One day after the Liberals tabled an inaugural budget packed with new spending, the government found itself on the defensive over the lack of a firm plan to eventually eliminate billions in looming deficits.

The Liberal budget projected $113.2 billion in red ink over the next five years, due in large part to increased funding in numerous areas – from Aboriginal Peoples to post-secondary education, middle and modest income families, infrastructure, the recently unemployed, veterans and seniors.

On the other side of the balance sheet, however, there was no indication of when, how or if the budget might eventually be balanced.

On Wednesday, Prime Minister Justin Trudeau and Finance Minister Bill Morneau began the process of selling their fiscal plan – and found themselves defending the lack of solid fiscal targets.

Pressed on the issue during a Radio-Canada interview, Trudeau maintained that the objective of the budget was not “to reach some mathematical balance” but to provide “optimism and trust” to Canadians.

Morneau later said the government’s goal “is to get to a balanced budget over approximately” five years – depending how much economic growth the Liberal blueprint generates.

Both men argued that some of the budget’s biggest spending, such as on infrastructure and the revamped multibillion-dollar Canada child benefit, would generate much-needed growth _ and eventually balance the books.

“Our priority right now is to make those investments that can make a difference,” said Morneau, who was also asked if the government would stop spending at some point if the growth fails to kick in.

The Liberal numbers also include a healthy, $6-billion adjustment for risk, which could ultimately help the government beat low fiscal expectations and balance the books even earlier than forecast.

Billions of dollars worth of campaign promises were missing from Tuesday’s budget, however, including health-care spending. Fulfilling some of those vows in the future would surely result in even more fiscal pressure.

“It was just a gaping hole… you can’t have a budget without a fiscal plan,” said Page, now a University of Ottawa professor.

The government doesn’t necessarily have to set a timetable to rebalance the budget, Page said, but big-ticket spending carries with it a responsibility to explain where the money is going to come from.

During the campaign, Trudeau promised to cap annual deficits over the next few years at $10 billion unless the economic situation got “radically worse.”

The Liberals also vowed to balance the books by 2019-20 – something Trudeau insisted in December was “very” cast in stone.

They also pledged to reduce the country’s net debt-to-GDP ratio in each year of their mandate to 27 per cent. The budget, however, only projected the ratio to fall below the current level after the next election in 2020-21 – and only to 30.9 per cent.

“If you don’t replace them with other targets, and you put out a budget with a major fiscal expansion, I think the fiscal credibility around the budget is very much undermined,” Page said.

“So, the budget doesn’t look responsible in that sense.”

In a separate interview Wednesday with the CBC, Trudeau disputed suggestions that he’d broken a core campaign vow, saying it’s “not true” that his government will pile up a deficit three times larger than promised this year.

The budget forecast a $29.4-billion shortfall for 2016-17 despite the Liberal campaign pledge to keep it under $10 billion.

“The promise I made was to invest in the future of this country,” Trudeau said. “That’s what Canadians told me we needed, and we were going to do it responsibly and that’s exactly what we’ve done.”

Trudeau pointed to the fact economic conditions deteriorated after the Liberal platform was crafted, reinforcing the need for investment to spur growth.

With interest rates at a record low and Canada’s debt-to-GDP ratio the lowest among G7 countries, the Liberals have also argued it’s the perfect time to make investments aimed at getting the economy moving again.