Carolyn Bennett: 'We are all on the same page' 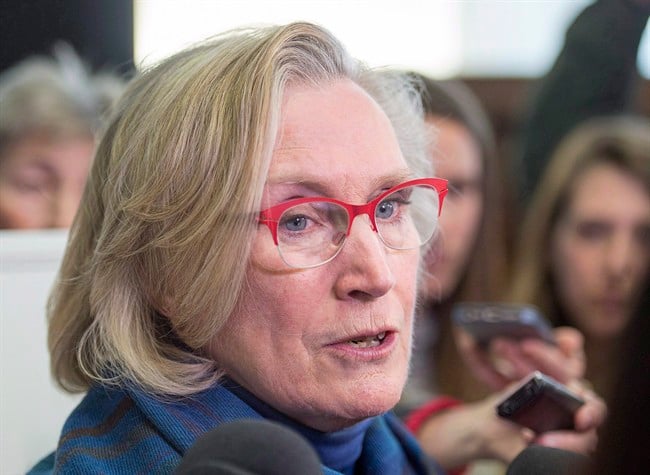 Federal Indigenous Affairs Minister Carolyn Bennett talks with reporters at a meeting of the Atlantic Policy Congress of First Nations Chiefs Secretariat in Halifax on Wednesday, in an April 27, 2016, file photo. Bennett earned a standing ovation from a UN forum today in New York when she announced Canada will move forward with implementing the declaration. (Andrew Vaughan/CP)

The decision — governments don’t typically support opposition motions — followed political pressure brought to bear on the government by Sen. Murray Sinclair, the former chairman of the Truth and Reconciliation Commission.

“We are all on the same page in terms of, we want the kinds of changes that really will be the real reform,” Bennett said Monday outside the House of Commons.

In written comments obtained by The Canadian Press, Sinclair called it impossible to overstate the importance of the federal government complying with an order from the Canadian Human Rights Tribunal to properly fund child welfare services on reserve.

The tribunal’s original decision, delivered in January, concluded the government was discriminating against First Nations children in the way it delivers those services. Two subsequent compliance orders from the tribunal went unheeded, critics say.

“Canada’s discriminatory policies have led to greater failed and failing interventions into the lives of indigenous families than the residential schools and serious changes must be undertaken,” Sinclair said.

“Immediate action is required,” he said. “I encourage members of the House to support the motion proposed by member of Parliament Charlie Angus.”

Bennett also said Monday the government is willing to sit down with the parties in the case through a facilitated process with The Canadian Human Rights Commission.

“The reason we want to sit down with the Canadian Human Rights Commission is to be able to stop talking past one another.”

In September, the commission urged the parties to resolve their dispute without further legal action.

“We have always been willing to try whatever route would make a difference in terms of the level of children,” Blackstock told a news conference. “We will see them there and we will welcome that opportunity.”

MPs will vote on Angus’s motion — which calls for an immediate $155 million plus a funding blueprint for future years — following question period Tuesday.

“This is not a motion that is NDP versus Liberal,” Angus said.

“This is every single parliamentarian from every part of Canada standing up and calling on this government to stop fighting the children, to put in place the measures that are credible, to stop ridiculing and undermining the numbers that are needed.”

Angus’ motion also urges the government to adopt Jordan’s Principle, which says no aboriginal child should suffer denial, delay or disruption of health services available to other children because of jurisdictional feuds.

It is named for Jordan River Anderson, a five-year-old boy with complex needs who died in hospital in 2005 after a two-year battle between the federal and Manitoba governments over his home care costs.

“This Liberal government … is fighting children in court to deny medical services,” Angus said. “The question is: if they pass this motion, will they phone those families and say, ‘We will stop fighting you immediately.'”

Prior to a debate on the motion last week, Bennett said a new special representative will lead national discussions on the reform of First Nations child welfare services.

Cynthia Wesley-Esquimaux — a Lakehead University professor and a Liberal candidate in the 2011 election — is to advise the government as it works with provinces, territories and child welfare agencies on an overhaul of the system.

Officials at the Indigenous Affairs Department insist government funding is being phased in over time deliberately because it has heard from agencies about the challenges of hiring and retaining staff, as well as the need for time to roll out new programs.