Progressive Conservatives are calling on Elections New Brunswick to count the votes by hand. 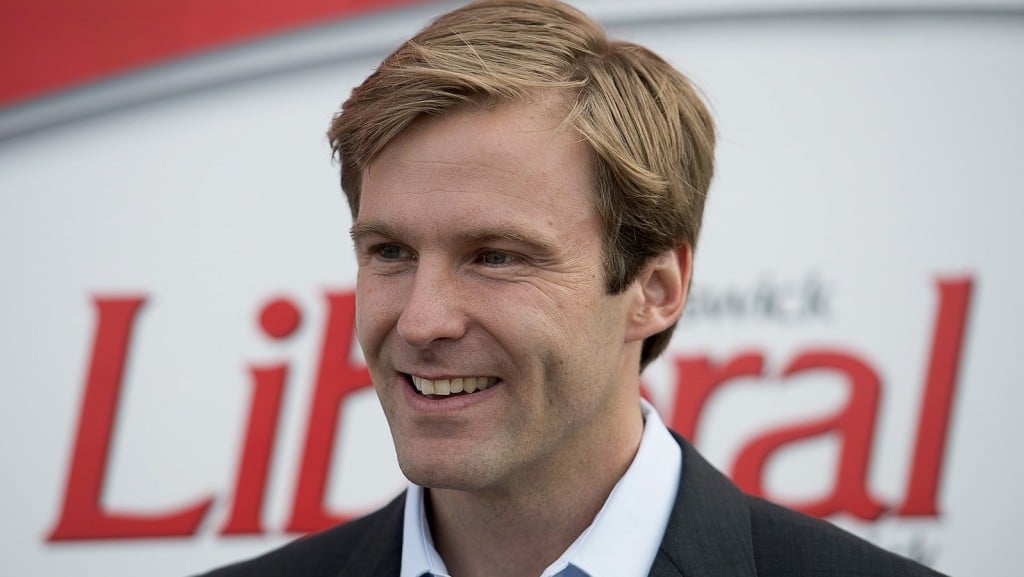 At 32, Brian Gallant is slated to become the country’s youngest premier. (CP Photo)

FREDERICTON — Amid a bizarre vote-counting snafu, rookie politician Brian Gallant led his Liberal party to a majority election victory in New Brunswick, as voters rejected the Progressive Conservatives’ bid to jump-start a moribund economy by expanding its shale gas industry.

“After a long night, it is with a great deal of humility that I accept the responsibility of being the premier of our beautiful province,” Liberal Leader Brian Gallant told supporters inside a gymnasium in Grande-Digue, N.B., early Tuesday. “I feel so humble and grateful to have earned your trust.”

With most of the polls reporting after a tight battle that went well into the night, the tabulation of ballots was suspended Monday around 10:45 p.m. for almost two hours as concerns arose about technical glitches with memory cards and discrepancies with vote-counting machines.

Before the count was stopped, Gallant’s Liberals and the Tories under David Alward were locked in a tight contest. That changed once the results were updated with the Liberals winning 27 ridings compared to the Progressive Conservatives with 21.

Green party Leader David Coon was elected in the riding of Fredericton South, a breakthrough for a party that has never held a seat in the New Brunswick legislature.

The vote counting glitch caused the Tories to call for all the ballots to be counted by hand, while the Liberals said Elections New Brunswick needed to be left alone to determine the outcome.

“Obviously, there was a delay but that doesn’t deny the results tonight,” Gallant said. “We believe we’ve clearly had a convincing plurality of the votes and we certainly have a majority of the seats. It makes it very clear that New Brunswickers have asked for change and that’s exactly what we’ll try to deliver for them over the next few weeks, months and years.”

A spokesman for Elections New Brunswick said the agency encountered a technical problem with the tabulation machines it was using to count ballots. Paul Harpelle said in an email that there were problems uploading data from memory cards.

The president of the Progressive Conservatives raised the possibility of the party rejecting the results without every vote being counted by hand. “We are calling on Elections New Brunswick to count every vote by hand as they always have,” Jason Stephen said. “It is best to make sure that all votes are counted properly. At that time we will accept the outcome of the election from the New Brunswick population.”

Liberal MP Dominic LeBlanc, a key member of Gallant’s election team, argued the parties should allow Elections New Brunswick to do its work. “The results in this election will not be determined by the bluster of political parties,” he said.

At 32, Gallant is slated to become the country’s youngest premier and leads the Liberals to their fourth straight election victory in the past year in Eastern Canada after wins by the party in Ontario, Quebec and Nova Scotia.

The Acadian lawyer, who was elected to the legislature only last year, was the perceived front-runner when the campaign started. He has promised to place a moratorium on the shale gas industry until risks to the environment, human health and water are known.

His campaign had its share of stumbles. At one point, he refused to rule out allowing shale gas companies to use hydraulic fracturing during his government’s first term, a position that anti-fracking activists assailed as muddled.

The Tory defeat makes Alward, 54, the second straight premier to fail in his bid for a second term, a rarity in New Brunswick politics. The same fate was suffered by Liberal Shawn Graham when Alward defeated him in September 2010.

Alward’s decision to embrace the shale gas industry was polarizing in the province, where a series of public protests culminated in a violent demonstration last fall in Rexton that saw 40 people arrested and six police vehicles burned.

Alward had said New Brunswick was on the verge of $10 billion in private investment if it develops its deposits of shale gas and welcomes the proposed Energy East Pipeline, which could see oil shipped from Alberta to Saint John.

But Gallant was under fire from all sides late in the campaign as his rivals pressed him to explain how the province could afford such government stimulus when it is looking at carrying a projected deficit of $387 million this fiscal year.

The province’s economic growth rate was also the worst in the country last year. While its jobless rate dipped to 8.7 per cent last month – slightly lower than its three Atlantic neighbours – that snapshot figure masks an annual trend that has seen steady increases since 2007.

The province’s poor economic record was a political millstone for Alward, who also promised to expand the province’s forestry industry by granting companies more access to softwood on Crown land – another commitment that did not sit well with environmentalists.

Alward also admitted during a leadership debate that he had failed to accomplish what he set out to do four years ago when he promised to balance the province’s books before the end of his mandate.

Alward and Gallant were both elected in their ridings by wide margins. But nine of Alward’s cabinet ministers went down in defeat.

As for the New Democrats, who have not held a seat in the legislature for nine years, leader Dominic Cardy, 44, tried to appeal to Liberal voters by shifting his party’s economic policies to the centre, promising a balanced budget, tax credits for employers who create new jobs and an end to corporate subsidies.

But the strategy was a flop. Despite running four high-profile candidates, the NDP failed to win any seats, including Cardy’s. He later announced that he would be stepping down as leader in a couple of weeks.

“My message to my party that I love, and my province which I love is that it’s much better to reach your arms out wide and to fall and to stand up again than it is never to dream at all,” he told his supporters.

The NDP has never held more than one seat in the legislature.

When the legislature dissolved, the Progressive Conservatives had 41 members, the Liberals 13 and there was one Independent. The election was fought on a new electoral map that cut the number of seats in the legislature to 49 from 55.