Life after the fire for the students of Fort McMurray 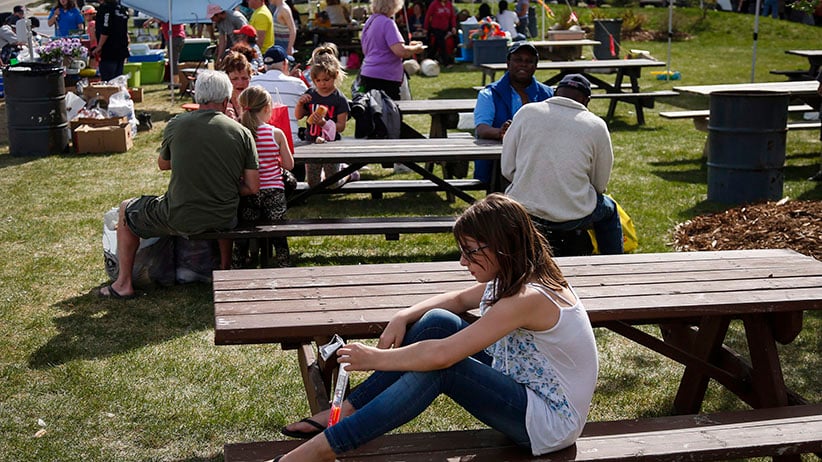 Before he fled Fort McMurray, Grade 11 student Borna Teymouri was analyzing Macbeth in English class, studying stoichiometry in chemistry and simplifying radicals in math. One week later, after enrolling in high school in southern Edmonton, Teymouri has been plunked into reading The Glass Menagerie in English, repeating stoichiometry lessons in chemistry, and doing “I have no idea what” in math. “It’s certainly a struggle,” he says, “but it’s something we’re getting over.”

Though the wildfire uprooted an entire city and halted multi-billion-dollar oil sands operations, it cannot stop education. Approximately 900 students evacuated from the region are finishing the last six weeks of the school year in Lac la Biche, Edmonton, Calgary and beyond. “They’re handling this with grace,” says Conal Donovan, principal of Lac la Biche’s J.A. Williams High School, which has enrolled 17 evacuees. “They get to chat in the halls. They get to play softball with phys ed class [and] do normal things a teenager would do.”

Evacuees in Grade 12 are exempt from provincial diploma exams. However, some students will opt to write the exams in hopes of using the marks for post-secondary admissions or scholarships. “It could mean good things for them later on,” says Donovan. Albertan school boards could decide to mark students based on the work completed before the evacuation or to factor in the marks from their new school districts. If the new schools host students until the end of the year, they will write report cards for them. Rob Wicker, principal of Aurora Middle School in Lac la Biche, says they’ll provide whatever documentation they need. “If that includes a report card, we’ll do a report card,” he says.

Regardless of capacity, schools across Alberta have held parent meetings and welcomed new students. Since many Fort McMurray families own holiday cabins on Lac la Biche, schools in that community in particular are seeing enrolment jump, although they haven’t hired additional staff. Donors are providing backpacks and school supplies, while schools are handing out textbooks. “Whatever they need, they have,” says Aimee Berland, who teaches drama, music, math and English at J.A. Williams. “They’re not just visitors. They’re our students now.”

Like teachers, children and teenagers have been eagerly hospitable. In Lac la Biche, students took two days off to volunteer helping evacuees at the shelter. “We were used to doing pancake breakfasts,” says Donovan of J.A. Williams. “I said, ‘let’s just feed them breakfast.’ When I returned [to the shelter], my staff and students were still there feeding them the third meal of the day.” Vera M. Walsh, a school that teaches kindergarten to Grade 3 in Lac la Biche, accepted 27 students. “One class didn’t get a new kid,” says principal Dana Robb. “They were saying, ‘when’s our turn?’ ”

In some cases, the disaster has tightened bonds within schools. “When we’re all closed in—jam-packed almost like sardines—we really come together as a community,” says Donovan. The new students are also invited to help with or attend the school’s upcoming production of a Death by Dessert, a murder-mystery dinner theatre. “We’ve made it clear that everyone’s welcome,” says the drama teacher, Berland. New students are also invited to prom, and Catherine Brawn, a 24-year-old dental assistant who evacuated Fort McMurray, is donating her $500 dress. “I think it’s very important for them to get to prom,” she says.

However, new schools can still be daunting. “We had a few students who were overwhelmed,” says Wicker of Aurora Middle School, which added 25 students to its population of 480. “It runs a gamut. [Some] have been nervous. Others show excitement and nervousness—the combination that kids deal with at a new school.” Teymouri’s new school has four times as many students as he is accustomed to. “Everyone’s got their established friend groups they’ve known for sometime, even a decade,” he says. Back in Fort McMurray, Teymouri had been invited to prom with a date in Grade 12. “I’m sure she’s got a different plan now,” he says.

The transition is particularly difficult for children with autism. Jeff Bowers has a three-year-old son, Ben, who is non-verbal autistic and was in preschool in Fort McMurray. “Our kids on the spectrum are 100 per cent dependent on routine,” says Bowers. “Throw him in hotels with different people, and it’s back to square one.” Ben also depends on continual lessons to remember letters, numbers and colours. “If he doesn’t practise them, he regresses,” says Bowers. “That’s the biggest thing we’re worried about now.” Fortunately, the Children’s Autism Services of Edmonton admitted Ben to their specialty school three days per week. “No kid is being left out,” says Bowers.

For students in public schools, what happens in the future is a multiple-choice question with several potential answers. Teymouri could end up returning to school in Fort McMurray in the coming weeks; he could stay in Edmonton and find a summer job, or he could attend summer school in either city. “The most forward ahead I can look is lunchtime,” he says. “This is a new reality here.” Amid the turbulence, while living with nine people at his aunt and uncle’s house, Teymouri is adjusting. “When in Rome,” he says, “do as the Romans do.”