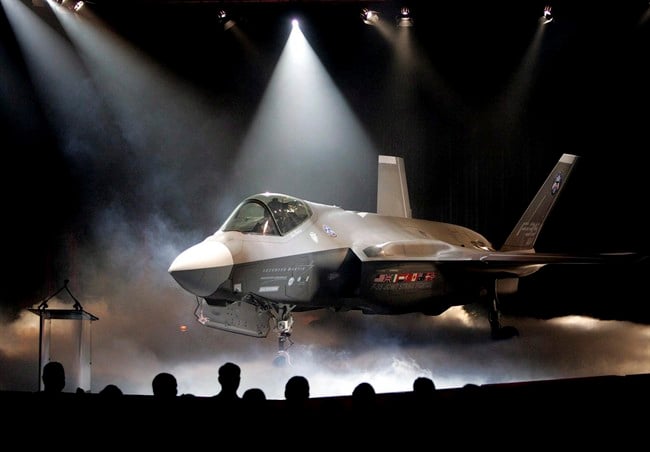 In this July 7, 2006 file photo, the Lockheed Martin F-35 Joint Strike Fighter is shown after it was unveiled in a ceremony in Fort Worth, Texas. The company building the F-35 fighter jet says all it wants is a chance to compete in an open and fair competition to be the contractor to provide the next generation of airplanes to Canada’s military. THE CANADIAN PRESS/AP/LM Ottero

OTTAWA – The company building the F-35 fighter jet says all it wants is a chance to compete in an open and fair competition to be the contractor to provide the next generation of airplanes to Canada’s military.

The possibility of being part of that process is murky, with the Liberal government having promised during last year’s election campaign that it would not buy the F-35, but vowing to hold an open competition to replace Canada’s fleet of aging CF-18s.

Further complicating matters is a published report that the Liberals have decided to purchase Boeing’s F/A-18 Super Hornet — a direct competitor being built by Lockheed Martin — as an interim measure to buy time for landing on a long-term fix.

Jack Crisler, Lockheed Martin’s vice-president of F-35 business development and strategic integration, said the company plans to support the Canadian procurement process, but believes its plane can compete with and beat the Super Hornet for any contract.

“Right now, all we want to do is to be able to compete,” Crisler said in a telephone interview.

“So if we get told that we’re not allowed to compete, then we’ll go and evaluate all of our alternatives at that point. But right now all we’re asking to do is be able to compete in a fair, open, transparent and requirements-based competition for the replacement of the CF-18s.”

The comments followed a tumultuous Tuesday in the House of Commons where the opposition parties accused the Liberals of having “rigged the process” to replace the CF-18s and of allowing “Boeing to jump the queue.”

Defence Minister Harjit Sajjan repeatedly told the Commons that the CF-18s should have been replaced long ago and there was a need to quickly fill a capability gap.

Prime Minister Justin Trudeau blamed the Conservatives for backing “a plane that does not work” and was a “long way from ever working.”

Crisler said Trudeau’s comments “couldn’t be further from the truth.” The U.S. Marines declared earlier this year that their fleet of F-35s is ready for combat, while the American air force is expected to make the same declaration by the end of 2016, Crisler said.

Federal lobbying records show Boeing has had a dozen meetings with government officials between February and April, including with senior staff in the Prime Minister’s Office.

Lobbying records show Lockheed Martin hasn’t been able to meet with any federal officials on the CF-18 file.

Annie Trepanier, a spokeswoman for Public Services Minister Judy Foote, whose department oversees major military procurements, said company officials had a meeting with Foote’s office on April 21, and again on May 25, both about the CF-18 replacement.

Crisler said the company hasn’t been given a reason for having their meeting requests rejected: “It’s not a hard no, but it’s certainly a ‘not now.’ Obviously, there’s somebody else that’s having access that no one else is enjoying.”

The CF-18s, purchased in the 1980s, were designed to last for 20 years. Having been pressed years beyond that timeline, the previous Conservative government decided to spend $400 million to keep the jets flying until at least 2025 by overhauling every part of the 77 fighter jets.

The Ottawa Citizen reported this week that cabinet had discussed buying the Super Hornets while officials seek out a long-term replacement.

All that was left, the report said, was to come up with a narrative to sell the idea to the public.

The government has done little to quash the report, other than saying no final decision on the CF-18 replacement has been made.