How the Canadian Navy got lost at sea

As the plight of HMCS Protecteur shows, the future of the Canadian Navy looks dead in the water 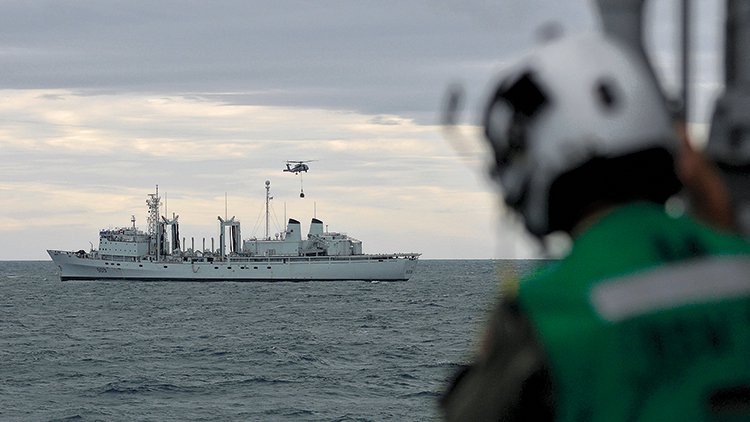 The Royal Canadian Navy has been hoping its collection of banged-up ships, aging arguably beyond repair and sidelined by a year of unprecedented bad luck, can stay afloat until planned new vessels are seaworthy. But destroyers and supply ships from a bygone era are eating up repair budgets as austerity chokes the Defence Department. And a recent mishap has proved particularly embarrassing.

The Navy’s West Coast supply ship, HMCS Protecteur, suffered a fire in its engine room on Feb. 27 that injured about 20 crew members and disabled the ship. The incident left Protecteur dead at sea, hundreds of kilometres from Hawaii. Help came in the form of USS Chosin, an American cruiser that attempted to tow the 45-year-old dean of the Canadian Navy to sanctuary at the Pearl Harbor naval base. But then, in choppy conditions, the tow line snapped. This week, the towing resumed at an estimated speed of nine kilometres an hour.

Back in August, when Protecteur and HMCS Algonquin collided during risky towing exercises, Algonquin took the brunt of the damage, most recently estimated at $3 million, and left the Navy without a destroyer in the Pacific. Protecteur was at sea again in a matter of days, but this recent fire shrouds her future in mystery.

Both Protecteur and HMCS Preserver, the East Coast supply ship, hit the seas over 40 years ago. The Navy had planned to retire the long-serving vessels over the next couple of years. But it may now take a pass on required repairs to Protecteur if it means just a few extra months of service.

If the fleet’s last year was defined by a rash of poor fortune, the near future may ultimately be remembered for a lack of ships at sea. David Perry, a senior defence analyst at the Conference of Defence Associations Institute (CDAI), says new joint support ships won’t be ready until at least 2019, which means several years of relying on allies for refuelling.

“We’re going to have no independent ability to project a naval task group, which is one of the core naval functions that, according to government policy, [the Navy] is supposed to be able to do on either coast,” says Perry. “That is simply going to be impossible.”

Perry says Canada’s fleet of frigates could start to feel the pinch, too. The dozen Halifax-class ships are coming to the end of a years-long billion-dollar retrofit program. While they sat in dry docks, the Navy’s operations and maintenance budgets shrank. Perry told a CDAI conference that total defence spending has, in real terms, declined to 2007 levels. And operations and maintenance has fallen 18 per cent below the $7.6 billion earmarked in 2009-10.

“If the budget levels don’t get adjusted, and the operations and maintenance imbalance doesn’t get fixed, [the Navy] is probably going to be pretty challenged to have the funding to operate all those ships,” says Perry. “That would significantly restrict their ability to respond to government direction, because frigates are the workhorses of the fleet.”

The fleet of a dozen smaller marine coastal defence vessels isn’t immune to cost-cutting, either. Two of the ships were taken out of service last fall, as the Navy funnelled most of its operational maintenance into its refurbished frigates and submarines. “They don’t have enough money to spread across the whole fleet,” says Perry. “That will restrict their ability to do coastal patrols and also, possibly, have a reduced ability to send the [coastal defence vessels] to do Caribbean operations.”

Meanwhile, mechanical malfunctions continue to haunt Canada’s seamen. Last month, engine failure sidelined HMCS Windsor, one of the Navy’s four ailing submarines, for at least seven months. Chalk it up as another unfortunate turn for an aging fleet that, in a matter of years, may find sailors onshore staring out at a lot of empty water.