'In everybody’s family, some really weird and emotional stuff goes on'

When Lynn Johnston was growing up in 1950s North Vancouver, she loved the challenge of going into the woods and painting rivers. “But I didn’t get any laughs,” recalls the famous cartoonist. “And I was the kind of kid who would do anything for laughs.” In school, Lynn’s antics would get her in trouble. “The teacher would say, ‘Do you want to be the class clown?’ I would cringe and say, ‘No.’ ” But the truth was, “Yeah, I do!”

Both art and comedy were natural ways for Lynn to express herself and cope in hard times. Her father was a jeweller who composed elaborate ads and window dressings for the shop with Lynn’s mother—whose brilliance had been stifled by her own father’s insistence that women should not be educated. Years later, Lynn endured her mother’s misplaced frustration. She was “wonderfully gifted” but also “cruel,” recalls Lynn, “and my father compensated by being a vaudeville comedian.”

After Lynn studied art and became a spouse and parent, too, she chanelled her personal insights into the internationally acclaimed For Better or For Worse comic strip. It was first syndicated in 1979 and has since run in more than 2,000 newspapers in 20 countries and eight languages. It features the Pattersons–loosely based on Johnston, her children and second husband–who aged in real time and faced real-life highs and lows. “It was just a regular family,” recalls Lynn, “and in everybody’s regular family, some really weird and emotional stuff goes on.”

FROM THE ARCHIVES: Maclean’s profiles Lynn Johnston in 1980, as For Better or For Worse gained attention

The strip became as much an index of Canadian life as the dailies in which it ran—with Lynn deftly chronicling the individual and social complexities of raising children, navigating relationships, growing a career, getting old and confronting sickness and death. Lynn never let a sensitive issue stand in the way of a good storyline. “We all have family members who become mentally ill, commit crimes, who are gay,” she says. “The only thing I could show was what I knew.”

Like in 1992, when she developed a four-week series in which a young male character comes out; Lynn wanted to honour an old friend who was murdered, and also her brother-in-law, both gay. In the strip, Lawrence’s revelation to his best friend, mother and stepfather provokes mixed reactions. In real life, the series created controversy across the continent. Nearly 50 newspapers killed the strip and, Lynn recalls, “I got death threats [and] some of the most incredible angry mail.” On the other hand, another 50 newspapers suddenly started running FBFW, and Lynn received boxes of positive letters too. 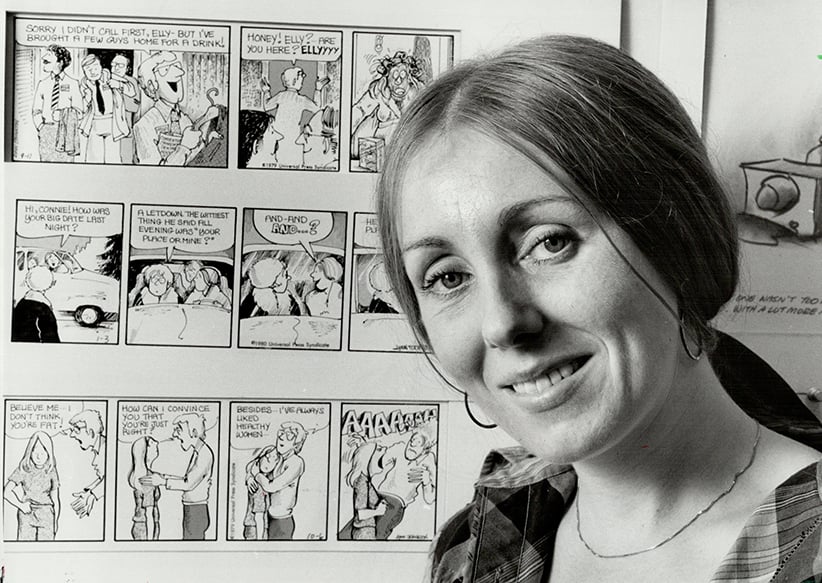 The strip is rife with poignant stories: when Farley, the family sheepdog that Lynn named for literary icon Farley Mowat, dies after rescuing the daughter April from a river. When son Michael leaves the family home for university. When mom Elizabeth is assaulted while at work and goes to court. Put this way, none of it sounds funny. But Lynn managed to make light of dark stuff. The comic reflected the best and worst of real life.

That Lynn stopped creating original content soon after the breakdown of her marriage only proves how true to life the strip really was: Everything, says Lynn, “has a beginning, a middle and an end. Whether you want it to or not.” — Cathy Gulli