Before the pandemic, Madeleine Peet worked in a restaurant while on a break from post-secondary studies. Now, she's swabbed a whole lot of schnozzes on the East Coast 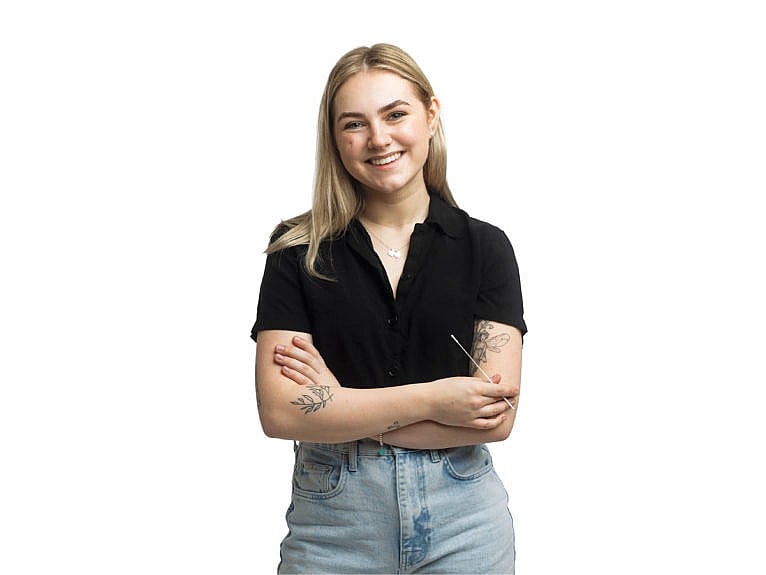 Madeline Peet. This portrait was taken in accordance with public health recommendations, taking all necessary steps to protect participants from COVID-19. (Photograph by Meghan Tansey Whitton)

Madeleine Peet did not set out to become a COVID tester. She’s neither a doctor nor a nurse, or even studying for a career in health care. Before she began working at COVID-19 testing sites, she toiled part-time at a restaurant in Halifax while on a break from studying sociology at Ryerson University in Toronto. Now she travels around Nova Scotia, administering tests at pop-up sites. She wields nasopharyngeal swabs, and speaks confidently about epithelial cells. It’s a big shift for someone who was initially squeamish about the process. “I wanted nothing to do with it,” she recalls. “It freaked me out a little bit.”

Peet started small as a volunteer at testing sites in November, helping to register patients before she warmed to the idea of administering tests herself. After a few weeks as a volunteer, she was tapped to become a trainer and now coaches other civilians through the testing process, which she says only takes about 45 minutes to learn. It involves a long swab, which travels up the nostril (Peet lets the patient choose which side) until it connects with the throat. “You can always feel when you meet that resistance. I leave it there for about five to 10 seconds, and I twist it before I pull it out.”

Peet estimates she performs about 50 swabs a day, but she’s careful to remember that many who come to see her are as apprehensive as she once was. She tries to help them relax, and finds many can laugh once they get over their initial jitters. “It’s nice to chat with people who haven’t had a lot of human interaction in quite a bit. While you’re giving them that swab, it feels good to check in on people.” Occasionally, a patient who is extra nervous will need time to calm down before they fully consent to the test. Months ago, Peet found herself dealing with people who questioned the accuracy and validity of the tests, but those concerns have faded as testing has become more commonplace. “It’s a completely voluntary process,” she says, “so usually it’s not a major issue.”

Overall, Peet says the atmosphere at testing sites has been personable and even fun, with testers and patients alike happy to do their part. “You get to talk to a lot of different characters,” says Peet, who has criss-crossed the province in her role. At one site in central Nova Scotia, she says, the waiting room took on the feel of a dinner party, with people chatting and laughing as they waited on six-foot markers. “Everyone there was so community-minded, and so excited to be there. They kept telling me, ‘My neighbour told me to come.’ Then the next patient I would end up meeting would be that person’s neighbour.”

What began as a way for Peet to pass the time during the crisis has proven an opportunity to get out in the community and help Nova Scotians get through this together. “Years down the line,” she says, “if someone asks, ‘What were you doing in the pandemic?’ I can say, ‘I was helping. I was doing something good with my time.’ ”