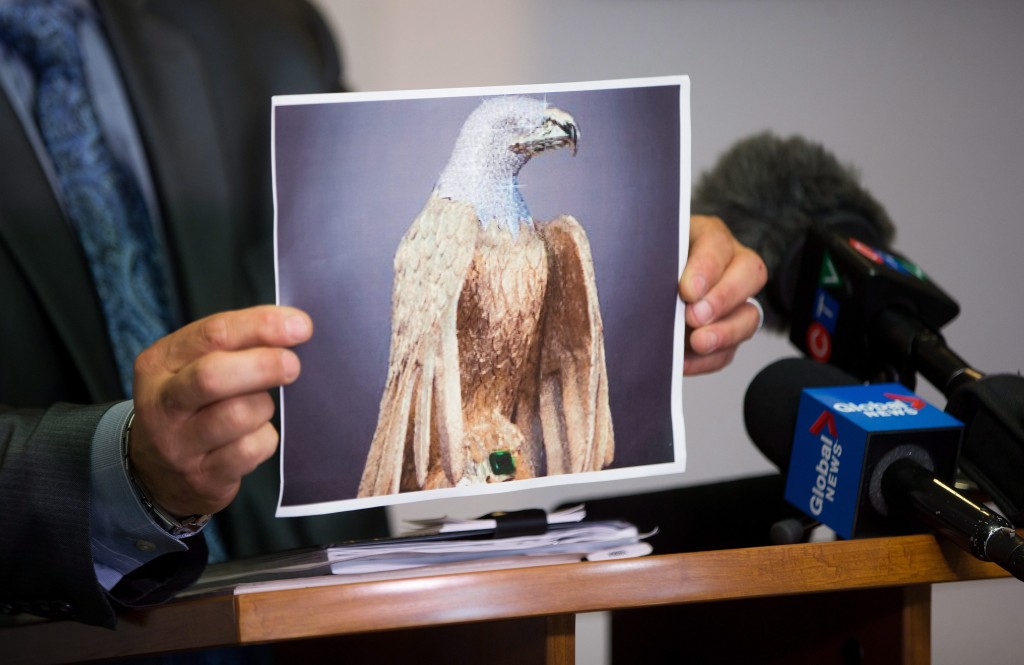 Delta Police Sgt. Brad Cooper holds a photograph of an 8 kilogram solid-gold, diamond-encrusted statue of an eagle that was stolen from Ron Shore during a robbery on Sunday, during a news conference in Delta, B.C., on Monday May 30, 2016. THE CANADIAN PRESS/Darryl Dyck

VANCOUVER – If thieves are hoping to dismantle a stolen jewel-encrusted eagle and sell the gold and gems for cash, they should think again, say jewellery experts.

Police have said the solid gold sculpture, known as the Maltese Eagle, was taken from its owner in a violent robbery on a street in suburban Vancouver on Sunday night.

The eagle stands about 30 cm tall and weighs more than eight kilograms. Its head is adorned with 763 diamonds and it sits on 12.72-carat emerald.

Owner Ron Shore has said the piece that was taken from him in the community of Ladner, B.C., is worth about $5 million.

“It’s going to be really hard to sell this because the industry knows about this, they’re not going to want to touch it, even if it’s in pieces. Unless they’re really shady,” said Suman Bakshi, who owns a jewelry store.

People in the industry talk and dealers will be on the lookout for suspicious sellers, she said.

Even people who haven’t heard about the robbery would think twice if they were approached to take apart such artwork, Bakshi added.

“If someone brought this to me and I didn’t know, my alarm bells would go off. I’d be like, ‘Why would you want to sell this? Look at this masterpiece!”’

Unsetting the jewels would be difficult, and a novice would likely end up breaking some of the gems, he said.

If someone managed to get the stones out, reselling them to jewellers on high alert would be challenging, Ritter said, adding police would be called, and groups such as the Canadian Jewellers Association or Jewellers Vigilance Canada would likely be informed.

Breaking down the piece and selling off the gems and gold would likely net less than hawking the eagle, he said.

“The design of it is much superior to if you started to take it apart and melt the gold down and get the diamonds. It’s just not worth the same.”

Bakshi said the eagle will likely end up in a private collection when someone offers the right price.

“Whoever has this is going to have a really hard time selling it because it’s such a unique piece.”

Police have said they are interviewing witnesses and working on a description of the suspect or suspects.