The 38-year-old Vancouver man left two injured in what appeared to be a botched robbery on Nov. 10 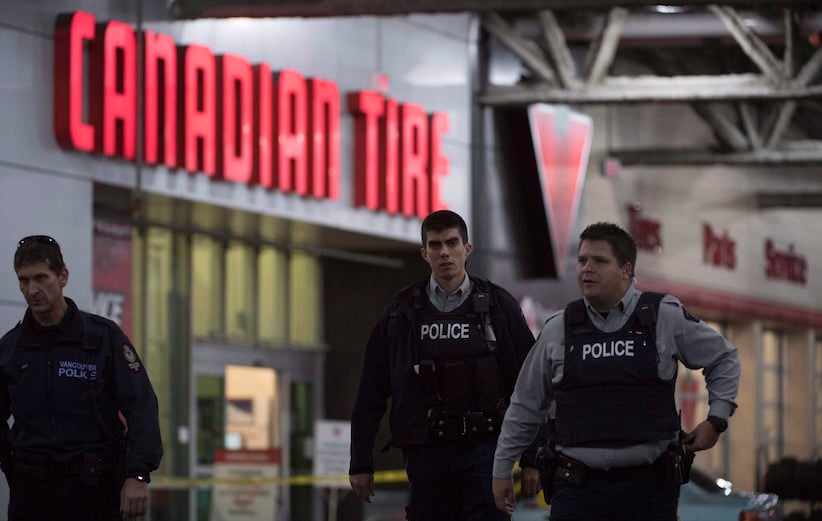 VANCOUVER – A “very large man” shot and killed by officers during a robbery and hostage-taking may have had further criminal intentions after trying to steal firearms from a Canadian Tire outlet, Vancouver police say.

Chief Constable Adam Palmer said the 38-year-old Vancouver man confronted and attacked a store clerk in what appeared to be a botched robbery on Thursday.

“A search of his home has provided police with concerning evidence of his possible criminal intentions, which will all be part of this ongoing investigation,” Palmer told reporters on Friday.

He said the 380-pound man, who stood six foot one and was dressed in camouflage, stabbed a 53-year-old employee in the back and across the neck before removing guns from store cabinets.

The suspect then abandoned the weapons and took an 82-year-old man hostage at knifepoint as he left the store and confronted police on a rooftop parking lot, Palmer said.

The man was also believed to have had a bottle of pepper spray, though police said it’s unclear whether he used it.

When police tried to arrest the man, he stabbed an officer multiple times, including in the head and stomach, Palmer said.

While the hostage was unhurt, the officer and the employee were rushed to hospital with life-threatening injuries. Both people were reported to be in stable condition as of Friday afternoon.

Palmer commended the officers who responded to the incident, including those who provided first aid at the scene, which he said was instrumental in the recovery of the two people who were injured.

“The actions of our officers were absolutely heroic,” he said. “I’m very proud of the way they performed yesterday.”

Mental health is suspected to have played a role in the incident, Palmer said. He added that the man was originally from Alberta, where he was also known to police.

On Thursday, witness Katarina Mitchell said she was in the upstairs parking lot of the Canadian Tire when she saw employees and customers running out of the store.

Several officers got out of the cars carrying guns just before a large man came out of the store holding what appeared to be a rifle and a spray can, she said.

The man sprayed something at the first officer who approached and a substance appeared to get in his eyes, she said, adding that a second officer then came after the man from behind and the two started “wrestling” on the ground.

“Then you hear shots go off, bang, bang, bang,” Mitchell said. “The guy is just dead on the ground there, not moving.”