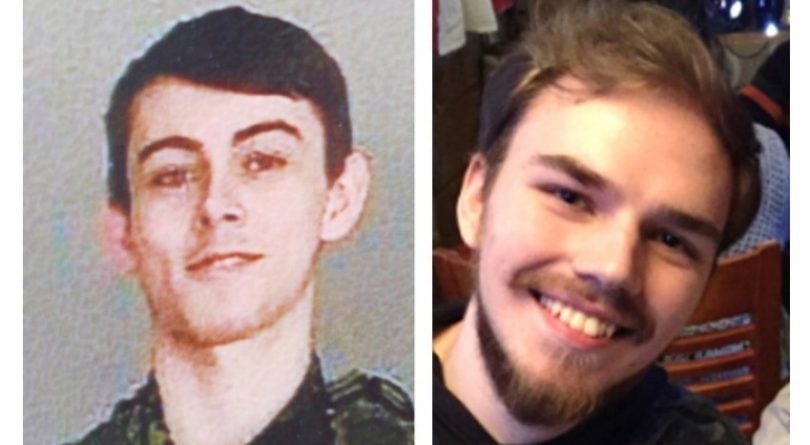 Bryer Schmegelsky, left, and Kam McLeod are seen in this undated combination handout photo provided by the RCMP. (THE CANADIAN PRESS/HO, RCMP)

VANCOUVER — Two British Columbia men who led police on a cross-Canada manhunt died in what appears to be suicide by gunfire, the RCMP said Monday. (See below for the full RCMP statement.)

Police say Bryer Schmegelsky and Kam McLeod appeared to be dead for a number of days before their bodies were found in northern Manitoba on Wednesday but the exact time of their deaths isn’t known. Autopsies were done by the Manitoba medical examiner.

Police say in a statement there were strong indications that the teens had been alive for a few days since they were last seen in July and during the extensive search efforts in the Gillam area. The Mounties said on July 25 that there had been confirmed sightings of the men in the area and they believed they were still in the region.

READ MORE: The end of the manhunt: two bodies are found in Northern Manitoba

Police say two firearms were located with the dead men and forensic analysis is underway to “definitively confirm” that the weapons are connected with the northern B.C. homicide investigations.

McLeod and Schmegelsky were charged with the murder of Leonard Dyck, a University of British Columbia botany lecturer, and were also suspects in the deaths of American Chynna Deese and her Australian boyfriend Lucas Fowler, whose bodies were found July 15.

“Investigators are now assessing all items located in Manitoba, along with the previous findings related to the three northern B.C. homicide investigations, in order to gain more clarity into what happened to Leonard Dyck, Lucas Fowler and Chynna Deese,” the statement says.

The RCMP say once its review has been completed in the next few weeks it will provide the families with an update and then will release the information publicly.

The autopsy results put a cap on the manhunt, which began July 23 when police announced Schmegelsky and McLeod were suspects in the deaths of the three people in northern B.C.

The teens, both from Port Alberni, had initially been considered missing when the burned out truck and camper they were driving was found just a few kilometres from where the body of Dyck was found at a highway pullout.

The bodies of Deese and Fowler were found on the Alaska Highway, 470 kilometres from where Dyck’s body was discovered on July 19.

A manhunt for McLeod and Schmegelsky led to Gillam, where the Toyota Rav 4 the men were seen driving was found burned. Officers converged on the area to begin what would be a two-week search.

Their bodies were discovered about a kilometre from where police said they found items on the Nelson River belonging to the suspects.

Police have said it may be difficult to determine a motive for the killings because the suspects are dead.

Bryer Schmegelsky’s father, Alan Schmegelsky, said during the manhunt that his son had a troubled upbringing and that he expected the teen to go out in a “blaze of glory.”

The Manitoba Medical Examiner has completed the autopsies and confirmed that the two deceased men located in Manitoba on August 7, 2019 were Kam McLeod and Bryer Schmegelsky. Their next of kin have been notified and they have been offered support.

The RCMP can also confirm that the two died in what appears to be suicides by gunfire. While both individuals were deceased for a number of days before they were found, the exact time and date of their deaths are not known. However, there are strong indications that they had been alive for a few days since last seen in July and during the extensive search efforts in the Gillam area.

Police can also confirm that two firearms were also located with the two deceased males and forensic analysis is underway in order to definitively confirm that these weapons are connected with the northern BC homicide investigations. The Manitoba RCMP have completed their search of the area where the two male bodies were discovered, approximately 8 km from where Mr. Dyck’s burnt RAV4 was located on July 22, 2019.

Investigators are now assessing all items located in Manitoba, along with the previous findings related to the three northern BC homicide investigations, in order to gain more clarity into what happened to Leonard Dyck, Lucas Fowler and Chynna Deese. The assessment will review all the investigative findings to date, whether it is statements, evidentiary time lines, physical or digital evidence, and the BC RCMP have also have engaged our Behavioural Analysis Unit (BAU).

The BC RCMP commits that once we have completed that review within the next few weeks, we will be providing the families with an update with respect to the totality of the investigations and then releasing the information publicly.