Controversy over gay and lesbian rights flared up on two fronts, including a human-rights complaint in Steinbach 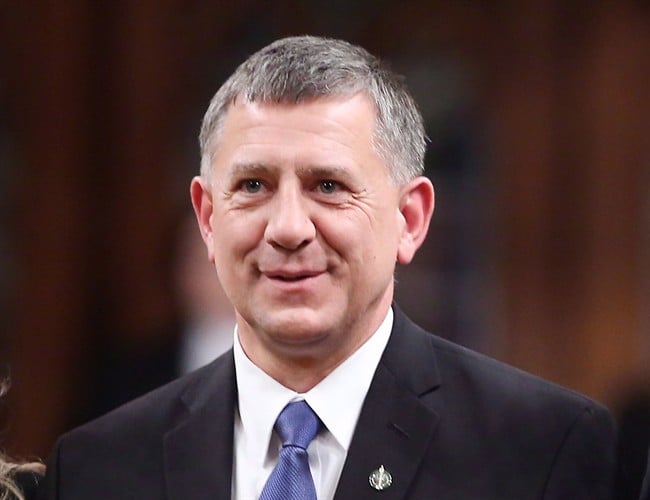 Conservative MP Ted Falk of the Provencher (Manitoba) riding, in the House of Commons in Ottawa Monday January 27, 2014. (Fred Chartrand/CP)

WINNIPEG – Controversy over gay and lesbian rights flared up on two fronts Monday in a conservative-leaning rural area of southeastern Manitoba sometimes referred to as the province’s Bible Belt.

The region’s Conservative MP said he would not attend a pride march because of his personal beliefs and two women filed a human rights complaint over the lack of same-sex education in local classrooms.

Ted Falk initially declined an invitation to attend the July 9 parade in Steinbach, about 60 kilometres southeast of Winnipeg, because he had already committed to a community frog-jumping competition called the Frog Follies.

Event organizer Marie-Christine Bruce took to social media on the weekend to urge Falk to opt for the pride event.

“We’re very proud of our festival, but we do not expect to take precedence over an important human rights event,” she posted.

That prompted Falk to issue a written statement Monday to clarify that he wouldn’t attend the parade even if his schedule were wide open.

“Even without a scheduling conflict, my decision to not attend would be the same. I’ve been clear on this issue many times, and have made my position public on my values of faith, family and community,” the statement read.

“Just as I respect the right of people to participate in this event, I am hopeful the event organizers will be respectful of my choice, and the choice of many others, not to participate.”

Bruce said she expected such a reaction.

“The politicians in that area … are not supportive of this issue, so I am in no way surprised.”

One of the organizers of Steinbach’s first pride parade, Michelle McHale, and her partner Karen Phillips are also alleging that one of their children was bullied at a school in the Hanover School Division because the two are a same-sex couple.

The couple’s complaint filed with the Manitoba Human Rights Commission alleges when McHale went to the principal with their concerns, she was told a division policy forbids any discussion of same-sex relationships until students reach high school.

Refusing to acknowledge gender diversity and promote tolerance in younger grades “creates this culture of exclusion and stigmatization that can really lead to an unsafe environment for students,” said the women’s lawyer, Allison Fenske.

The school division’s board of trustees said it had yet to receive a copy of the couple’s complaint.

“Until we have had opportunity to review contents of the complaint, no further statement will be issued,” board chairman Ron Falk said in a written statement.

When reached by The Canadian Press, the chairman declined to say whether he is related to area MP Ted Falk.

In a news release in April, the division said it fulfils its requirements under the provincial curriculum and respects “the role of the parents or guardians as the primary educators of their children, especially in the areas pertaining to family life.”

The division’s policy says teachers up to Grade 8 should call parents if a child inquires about topics including sexual orientation and abortion. It also suggests the child talk to a counsellor, a trusted relative or a help line.

McHale first took her complaint to a school division board meeting in April, where she asked that students be allowed to discuss sexual orientation in class.

On June 7, a majority of trustees spoke out against the request. One suggested a link between sex education and higher rates of cancer.

Another said not notifying parents removes them from the discussion and would be akin to the way indigenous parents in previous generations had their children taken away to residential schools.

After that meeting, McHale and Phillips sought a lawyer and went to the human rights commission.

“The exclusion of sexual orientation (discussion in class) sends the message … that there is something so wrong with anything other than heterosexuality that it cannot be discussed in any manner in the classroom,” the couple’s complaint letter states.