As NDP support sags, a member of provincial party executive says that Selinger must decide whether he will stay on 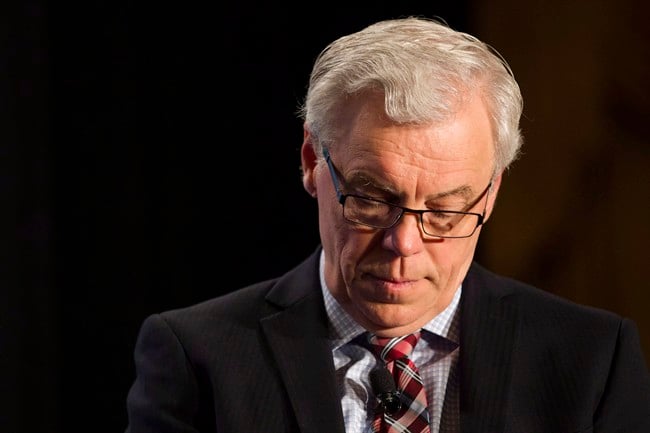 WINNIPEG – A former cabinet colleague says Manitoba Premier Greg Selinger must think hard about whether he will lead the New Democrats into the next election slated for April 2016.

“There are a number of people who have shared their concerns — and continue to do so — and I think it’s critical that he make a decision and do so very quickly,” Becky Barrett, who currently sits on the provincial NDP executive as vice-president for the Interlake region, told radio station CJOB.

Media reports, based on anonymous sources, of internal dissent within the party have been growing in recent weeks. Barrett’s radio interview Monday was the first time a well-known party member went on the record.

The NDP plummeted in opinion polls after raising the provincial sales tax last year to eight per cent from seven. Selinger had called the idea of an increase “ridiculous” in the 2011 election campaign, but later said he had to change his position to help the economy and fund much-needed infrastructure work.

In a followup interview, Barrett said it’s clear some Manitobans have lost trust in the premier. Selinger has to decide whether he will run again and, if so, outline a game plan to win the next election, she suggested.

“I think the basic concern is that the premier has not addressed the feeling that the majority, it appears, of Manitobans have that he lied to them and he betrayed their trust,” said Barrett, who served in cabinet from 1999 to 2003.

“If he’s running again, he has to … begin rebuilding that trust and every day that he doesn’t do that is a day that makes it more difficult for him and the party in the next election.”

Selinger was not available for comment Monday. His communications team issued a written statement saying he “remains focused on the job he was elected to do — delivering on the priorities of Manitoba families, creating jobs and opportunities for young people, and growing our economy.”

“There are some people that are unhappy, but there are a lot of people who are also very happy with what is going on,” Wowchuk said.

The alternative to a tax increase would be cuts to front-line services, said Wowchuk, who added she stands firmly behind Selinger.

Recent opinion polls suggest that support is now in the low-30s and well behind the Opposition Progressive Conservatives. The most recent sign of trouble came in last week’s mayoral election in Winnipeg, where longtime New Democrat Judy Wasylycia-Leis finished a distant second to winner Brian Bowman.