'I would encourage, again, the federal government to move beyond the talking points' 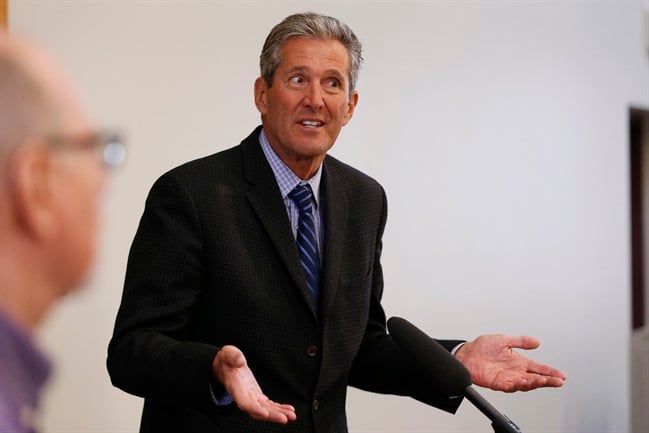 Manitoba Premier Brian Pallister responds to media after meeting with the Manitoba Islamic Association at the Grand Mosque in Winnipeg, Tuesday, January 31, 2017. Pallister addressed topics such as the Quebec mosque shooting, indigenous night shooting and his time spent in Costa Rica. THE CANADIAN PRESS/John Woods

WINNIPEG – Manitoba’s premier says the federal government needs to move beyond talking points on an influx of people who have jumped the border from the U.S. to seek asylum in Canada.

“I don’t want this to be taken as a criticism of the federal government. I see an opportunity here for the federal government that they are not yet pursing to improve the way we do things and help make sure we are addressing a situation that some would fear is getting somewhat out of hand,” Brian Pallister said Thursday.

“So I would encourage, again, the federal government to move beyond the talking points of us having had a worse problem 15 years ago and recognize there is a challenge today. We need to face the challenges of today together.”

The Tory premier made the comments as he announced the opening of 14 new emergency shelter spaces to house refugee claimants in Manitoba.

The province is also moving paramedics to the border near the community of Emerson to help local emergency crews deal with people who make the frigid walk into Canada.

Pallister reiterated that an influx of refugee claimants coming from the United States is a national issue that needs a national plan.

That plan, he said, would involve better information sharing and better co-ordination of resources.

The number of people fleeing the United States, largely from African countries originally, has jumped in recent weeks after planned crackdowns on immigration in the U.S. The refugees have been crossing fields and ditches near border communities such as Emerson-Franklin, Man., and Hemmingford, Que.

MORE: Colin Horgan on that viral photo in Quebec

The tactic is a way to get around the Canada-U.S. Safe Third Country Agreement, which requires anyone who has already applied for refugee status in the U.S. to be turned away at an official border crossing in Canada. However, if people cross somewhere else and get apprehended on Canadian soil, they can make a refugee claim and their cases are heard by Canadian authorities.

Some immigration lawyers and politicians want Canada to change the agreement so that people can turn themselves in at official border crossings and still get their refugee claim heard.

Ottawa has so far resisted those calls.

Federal Immigration Minister Ahmed Hussen said earlier this week that he sees no need to change the agreement, because the United States is still living up to its international obligations in dealing with asylum-seekers.