Marc Garneau has something to not announce

There are new measures but not restrictions on some flights from some countries the transport minister refuses to name. Got it? 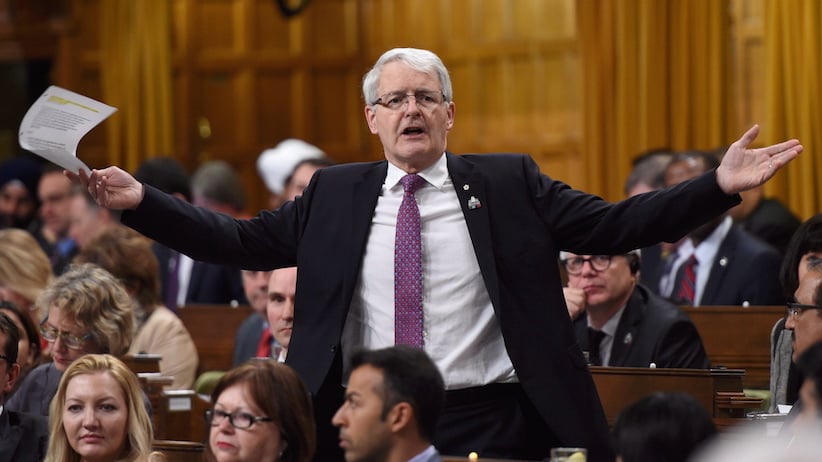 Transport Minister Marc Garneau answers a question during Question Period in the House of Commons in Ottawa, Tuesday, April 4, 2017. THE CANADIAN PRESS/Sean Kilpatrick

I have no idea what to do with this.

Marc Garneau, Canada’s transport minister, came out of Tuesday’s cabinet meeting and spoke to reporters about—about “certain measures” for “some flights” from “some airports.” These are “additional measures,” he said, that are “now in place,” but there are “no restrictions” on taking laptops into airplane cabins. Garneau said he can’t say more than this, “for obvious security reasons.”

Reporters ask him to repeat in English. He does, substantially. He’s asked: What kind of additional measures?

Reporters ask him to be a bit more precise. As one would. His next remarks offer no more precision. Reporters try again: “Why can’t you tell us what countries?”

“Because these are—these are very sensitive informations that would reveal a great deal to—to—if it was made public,” Garneau says.

Does that mean passengers won’t be allowed to carry electronic equipment—basically at this point, everyone’s using exquisite euphemisms for laptop computers—onto their flights?

“At this point, at this moment, they’ll still have permission to take their—their electronic equipment onto flights,” Garneau said.  “There are no restrictions at this time, but we’ll keep evaluating.”

A reporter tells the minister, “We’re all scratching our heads right now.”

Garneau: “I will only tell you that those measures are now in place. And they are from different airports where there are flights coming to Canada, and it is based on our evaluation of risk. And for obvious reasons I can’t tell you on which flights and in which places. I will not tell you that information because it’s important not to make that public.”

I can’t decide which part of this is my favourite. Is it that “there are no restrictions,” even though “those measures are in place”? Is it that the minister is intent on telling nobody which countries are involved? Theoretically, if the “measures” are perceptible to passengers, the passengers will be able to email, tweet or otherwise inform the rest of the world about the nature of the “measures.”

The only way I can make all of Garneau’s remarks comprehensible is if the new measures were, in fact, imperceptible to passengers. That would make them quite different from the United Kingdom’s announcement in late March that passengers from six countries in the Middle East and North Africa will have to keep their electronics in checked baggage, instead of in passenger cabins.

And it would make the “new measures” different from the policy the Trump administration announced a day earlier, banning large carry-on electronics from 10 airports across the same region.

But by now I’m only guessing at the nature of the restrictions or measures or whatever Garneau has announced. The minister has now taken three weeks to decide whether to follow suit in the wake of the U.S. and U.K. announcements of policies that were broadly similar but different in crucial ways. He has announced measures that aren’t restrictions, on some flights from some countries he refuses to name.

Since nothing he said made the government’s action in any way comprehensible to citizens, it’s not clear why Garneau said anything.