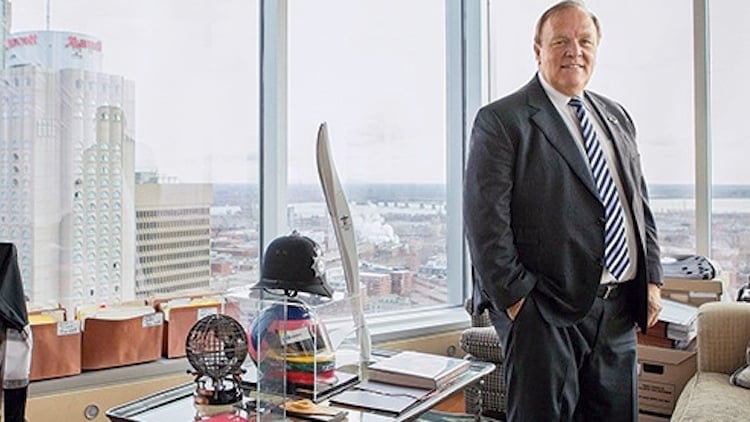 MONTREAL — Marcel Aubut resigned as president of the Canadian Olympic Committee on Saturday morning after the organization launched two investigations into allegations of sexual harassment.

Aubut announced on Wednesday that he would step away from his duties after a complaint had been filed against him to the COC. Since that original complaint, two other women have come forward with their own allegations against Aubut.

“Unfortunately, the current situation is a major distraction that obscures the COC’s real goals, especially with the Rio Games fast approaching,” said Aubut in a statement. “It now jeopardizes the organization’s smooth operations and may have repercussions that ultimately affect Canadian Olympic athletes who are the COC’s raison d’etre and who have always been the focus of my concerns and my volunteer involvement in the Olympic world.

“For these reasons, I announce today that I am stepping down as president of the Canadian Olympic Committee, to which I have devoted the past 10 years of my life and championed with all of my energy.”

The COC had retained a former chief justice of the Quebec Superior Court, Francois Rolland, to investigate the initial complaint. On Friday, the organization launched a second investigation to examine any further complaints about Aubut that are brought to its attention.

Rolland’s initial investigation has ended in the wake of Aubut’s resignation as the complainant no longer wants to pursue it. However, the COC is still looking for an independent third party to lead its second, ongoing investigation.

“We would like to thank the complainant for their incredible courage in coming forward,” said the COC’s statement. “The independent third party process investigating any other complaints will continue uninterrupted. We hope that anyone who has concerns will contact us.”

On Thursday, Montreal lawyer Amelia Salehabadi-Fouques gave several interviews about her interactions with Aubut, while TVA broadcast an interview with a woman the television network said worked closely with him. Neither woman has filed a complaint with the COC as the alleged incidents took place outside of his role with the organization.

Salehabadi-Fouques, who specializes in sports law and has been a member of the board of the Canadian Soccer Association since 2013, says she was the victim of harassment by Aubut on three occasions, beginning when she met him four years ago.

Her unproven claims include an allegation of a forced kiss during their first meeting and allegations of sexually charged comments on their next two encounters.

In the TVA interview, which aired later Thursday, a woman alleged that several sexual harassment incidents involving Aubut occurred in 2011 when he was working at a law firm in Montreal.

The woman was not named but the network said she worked with him.

“In recent days, allegations of harassment have been directed toward me by people who accuse me of intentions that I never had,” said Aubut in Saturday’s statement. “Although I assume full responsibility for my effusive and demonstrative personality, I would like to reiterate that I never intended to offend or upset anyone with my remarks or my behaviour.”

He previously served as chief executive officer of the NHL’s Quebec Nordiques until the team moved to Colorado in 1995. He notably helped retired NHL hockey players Anton, Marian and Peter Stastny defect from communist Czechoslovakia to Canada in 1980 to play for the Nordiques.

“Yes, you hear things in Marcel’s personality, which is maybe a personality from another generation,” former Olympic skier Jean-Luc Brassard told The Canadian Press. “What surprised me the most was it seems people knew about this for 40 years, since the time of the Nordiques.

“If everyone seemed to know why didn’t anyone say anything?”

Aubut was inducted into the Order of Canada as a member in 1986 and was promoted to officer in 1993. In 2006, he was made an officer of the National Order of Quebec.

Aubut was inducted into Canada’s Sports Hall of Fame in 1999, and continues to practise law and is a partner, lawyer and vice-chairman of the board of directors at BCF, a Montreal-based law firm.

The firm put out a statement Wednesday saying it would not comment on the investigation, adding Aubut’s position at the firm was not at risk since the allegations did not directly involve his professional activities.

The Canadian Olympic Committee Board announced later Saturday that four-time Olympian, lawyer and businesswoman, Tricia Smith will serve as the Interim COC president.

“I live the values embodied in sport and take very seriously my role in helping spearhead change for the betterment of the Olympic movement in this country,” Smith said in a statement. “Along with my Board, our priority is to institute changes to ensure a safe environment for our athletes, coaches, staff, volunteers and all those in the Olympic family. I am personally committed to making that family safer and healthier.”