'My brothers and sisters, you are our family,' says mosque president

QUEBEC – One week after six of their own were gunned down in a deadly attack, worshippers from a Quebec City mosque led hundreds of residents on a march to promote unity and tolerance on Sunday.

After a 6 km walk under snowy skies, mosque president Mohamed Yangui read a message he said was written by the family of the victims of the tragedy.

“My brothers and sisters, you are our family,” it began.

“Thank you to our community who came from Montreal, from Sherbrooke, from Ottawa in Ontario and elsewhere.”

The message went on to thank Quebec City officials and first responders as well as Quebecers and Canadians for their sympathy and support in the week since the massacre.

“Thank you everyone, for your sympathy and your love,” Yangui read.

The march began at Laval University, where one of the victims taught, and made its way down one of the city’s main streets to Quebec’s legislature.

The crowd grew as the march progressed, as people from the sidewalks linked arms with the marchers and joined in chanting slogans such as “All Canadians! All Quebecers!” and “No to violence, no to hate.” 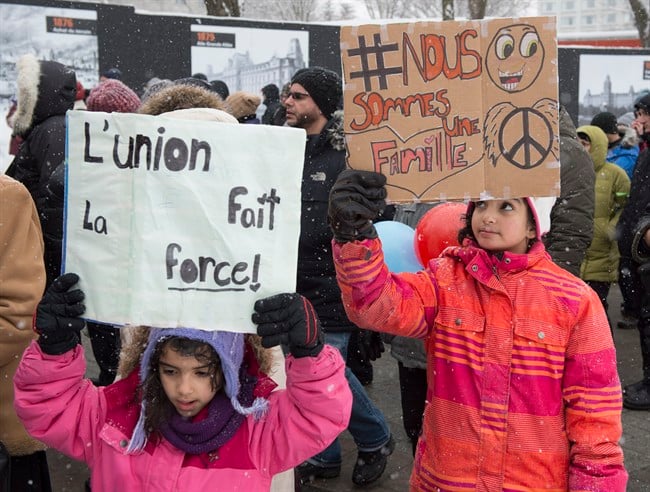 Seven-year-old Hajar Djilali-Merzoug, left, and her sister Affafe, of Saguenay Que., holds handmade signs at a march in solidarity to the victims of the mosque shooting, Sunday, February 5, 2017 in Quebec City. Six people died in a shooting at a Quebec City mosque on January 29. THE CANADIAN PRESS/Jacques Boissinot

Ali Dahan, a former diplomat, said he was marching in memory of his friend Azzedine Soufiane, who was among the six men who were gunned down during evening prayers the week before.

He said he’d seen Soufiane, a grocer and father of three, the day before the shooting.

“He was so kind and he was interesting, everything that was peace and love,” he said. “I couldn’t believe the next day he was dead.”

One woman, who gave her name as Fatima, struggled to find the words to explain the loss suffered by the community.

“It will always be painful because what happened cost us so dearly,” she said. “It’s as if (the shooter) chose the stars of our community.”

The six victims, aged between 39 and 60, were killed when a gunman stormed the mosque and opened fire on men who were attending prayer. Several others were wounded.

Organizer Reda Kada said the march was a way for members of the Muslim community to reach out to thank Canadians and Quebecers for messages of solidarity they’ve received over the past week.

He also said it was important to build on the goodwill of the past week to create lasting change.

“We want to prove to everybody that we want to stay here and work with the people of Quebec for peace and unity,” he said.

One of the organizers, Smail Kalla, announced that the last of the six victims had been buried in Montreal on Sunday. He said burials for other victims took place over the weekend in Morocco, Algeria and Tunisia.

At the end of Sunday’s march, a moment of silence was held in honour of those who were killed and injured.

A second moment of silence was dedicated to the family of the man charged in connection with the killings. An organizer described the family members of Alexandre Bissonnette as fellow victims of the tragedy.

He is due to appear before a judge this month on the allegations, which haven’t been tested in court.