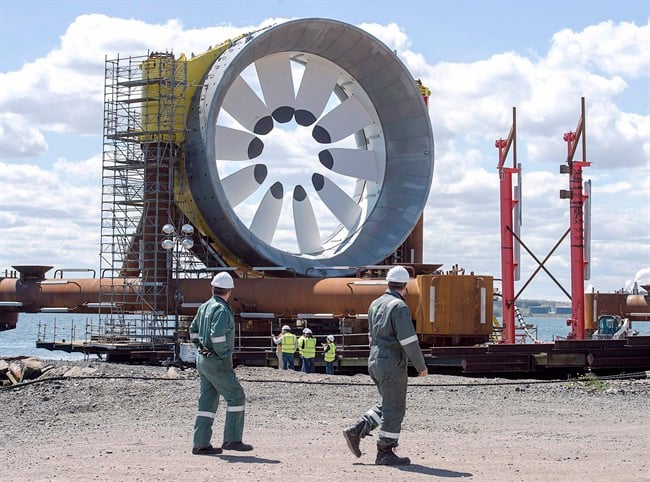 A turbine for the Cape Sharp Tidal project is seen at the Pictou Shipyard in Pictou, N.S. on Thursday, May 19, 2016. A massive underwater turbine started generating electricity from the world’s highest tides in the Bay of Fundy on Tuesday, a test project the Nova Scotia government says marks a turning point for Canada’s renewable energy sector. (Andrew Vaughan/CP)

“This is a proud and historic moment in Nova Scotia’s global leadership in the responsible development of a renewable energy source,” Nova Scotia Energy Minister Michel Samson said in a statement. “As we make the first in-stream tidal energy connection to the Canadian grid, we are ushering in a new era in marine renewable energy.”

The partnership behind the project includes Halifax-based Emera Inc. and OpenHydro, a French conglomerate that specializes in naval defence and energy. Its two-megawatt turbine was lowered to the bottom of the bay two weeks ago.

The 1,000-tonne machine is about five storeys tall, but it is only a test model. It is anchored on the seabed at the eastern end of the bay in the Minas Passage, a five-kilometre-wide channel near Parrsboro, N.S. The powerful tides there left a smaller test turbine badly damaged in 2009.

A second test turbine will be installed next year.

The completed four-megawatt demonstration project will use a fraction of the 7,000 megawatt potential of the Minas Passage, the government said.

Still, the renewable energy project will displace the need to burn about 2,000 tonnes of coal, the province said. That will eliminate about 6,000 tonnes of greenhouse gas emissions — the equivalent of taking 1,000 cars off the road each year.

“This is a huge achievement,” said Thierry Kalanquin, chairman of OpenHydro and a senior vice-president with DCNS.

The province says more than 300 people have been employed on the project.

Earlier this year, a group of Nova Scotia fishermen failed in their bid to get a court to order Cape Sharp Tidal to suspend its work.

The 175-member Bay of Fundy Inshore Fishermen’s Association argued that the project requires more study to ensure the turbines do not harm marine life.

The fishermen wanted the project put on hold until a year-long study could establish a scientific baseline for the state of the bay.

The Nova Scotia government has said the slow-moving turbines are unlikely to have a “food processor effect.”

“Monitoring at other tidal sites around the world has not observed a single collision between ocean life and turbines in a marine environment,” the government said in a statement.

Matt Lumley, a spokesman for the test centre overseeing several tidal generating projects in the bay, has said that many of the questions raised by the fishermen can’t be answered until the test turbine can be studied in the water.

The Fundy Ocean Research Centre for Energy has already collected a great deal of data on sound, fish, lobster and marine mammals. Those monitoring reports will be shared with regulators and the public, the government said.

The centre has spent over $15 million to date on 110 studies and developed three underwater sensor platforms.

Cape Sharp’s project is one of five aimed at testing different turbine technologies.

Harnessing the awesome power of the bay’s tides has been a work in progress since the 1600s.

There has been limited success. In 1984, a form of hydroelectric dam was built at Annapolis Royal, N.S., but the small, 20-megawatt plant remains only one of three tidal plants in the world.

In 2009, OpenHydro and Nova Scotia Power deployed a 400-tonne turbine in Minas Passage, only to see it shredded by crushing currents that travel at five metres per second.