Investigation continues into death of Barr, a member of a small group of highly trained rescuers known as 'SAR Techs' 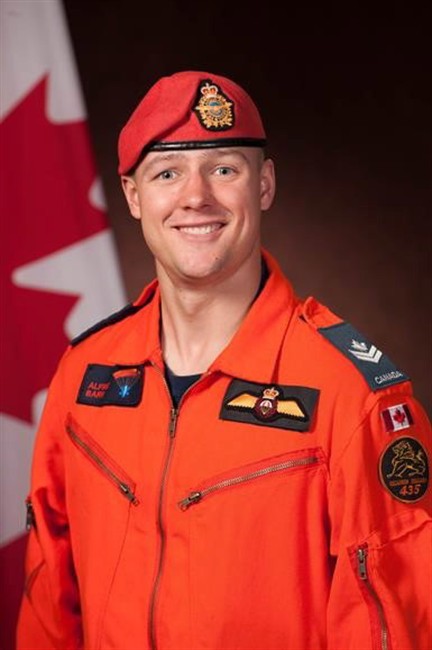 YORKTON, Sask. – The military says a search-and-rescue technician who died in a training accident in Saskatchewan had a parachute malfunction.

Master Cpl. Alfred Barr was a member of 435 Transport and Rescue Squadron at 17 Wing in Winnipeg.

The Royal Canadian Air Force says his death Wednesday is under investigation and the military has more questions than answers about what happened.

“Yesterday was just another routine training day. They were operating in the vicinity of Yorkton, Sask., and during a parachute drop — unfortunately there was a malfunction of some sort and Master Cpl. Alfred Barr did not survive.”

Barr, originally from Lethbridge, Alta., joined the military in 2009, but had just graduated from the search-and-rescue training course in June.

The military said Barr’s comrades were grieving the loss of a friend and member of a small, tight-knit group of highly trained rescuers known as “SAR Techs.”

Col. Andy Cook, commander of 17 Wing, said Barr, 31, died while honing the skills SAR Techs use to find and save people in dangerous situations, sometimes under extreme conditions.

Cook said the military will use any lessons learned from the investigation to improve training to prevent similar deaths.

More than 1,000 people posted messages on social media sites after the accident.

Kan Zilla said Barr was one of the nicest people she knew in the military.

“I never heard him lose his cool over little things,” Zilla wrote. “I’m proud to have known him, served with him. He was an inspiration and will remain that way for me.”

Cathay Wagantall, the MP for Yorkton-Melville, expressed her condolences to Barr’s family and friends with a statement in the House of Commons.

A video of Barr’s graduation ceremony last June from the gruelling SAR Tech training program shows him proudly marching up to senior officers to receive his wings and orange-coloured beret — symbols that he had become a para-rescue specialist.

One photo in the video shows a smiling Barr giving the camera a thumbs-up sign. He is dressed in the distinctive orange flight suit worn by SAR Techs and wears a parachute harness. Other photos show him posing with his family and fiancee.

On his Facebook page, Barr acknowledged being part of a rescue mission that saved a family of four adrift overnight in Hudson Bay last summer.

In February 2015, search-and-rescue technician Sgt. Mark Salesse, also of 17 Wing, was buried under an avalanche in Banff National Park. A report into his death recommended more avalanche training for SAR Techs.

The military says only about a dozen to 16 people are selected each year from many applications to take the 11-month SAR Tech course.