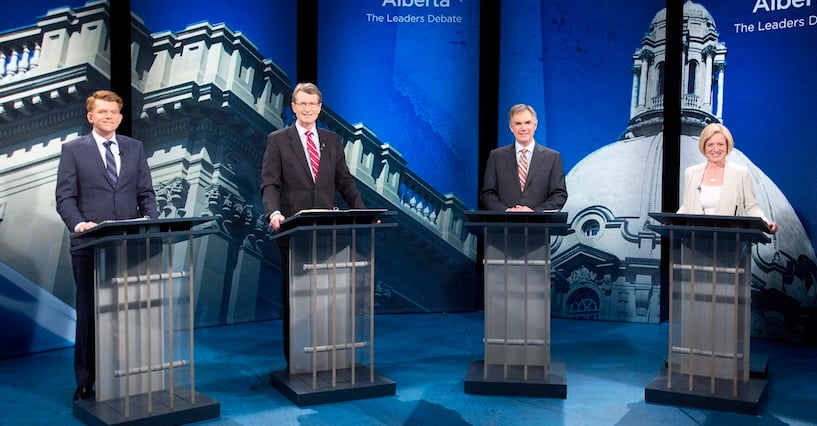 EDMONTON — Alberta Premier Jim Prentice traded barbs with NDP Leader Rachel Notley — mock commiserating with her that “math is difficult” — and literally turned his back on Brian Jean of the Wildrose in a flinty debate Thursday night.

At one point, Prentice misstated that the NDP wanted to raise Alberta’s 10 per cent corporate tax rate to 20 per cent instead of the 12 per cent outlined in the NDP budget plan.

“What are you talking about, our proposed corporate tax rate is 12 per cent. I am not sure who is briefing you,” Notley interjected.

“I know that math is difficult,” Prentice said as the two leaders talked over one another. “Ten per cent to 12 per cent is a 20 per cent increase.”

“You said a 20 per cent tax … I just need to make that clear that we are not proposing a 20 per cent corporate tax. That would be ridiculous.”

Prentice later told reporters the math comment referred to the $1 billion costing error the NDP admitted it made in its proposed budget unveiled earlier in the week.

“I didn’t mean that in any mean-spirited way whatsoever,” he said.

Notley went on the attack during the debate, painting Jean and Prentice as two peas in the same conservative pod given that late last year, most of the Wildrose caucus, including then-leader Danielle Smith, quit to join Prentice.

“Albertans, do you really believe that you can trust either of these two to bring about the kind of change that you are looking for in your province today?” Notley asked.

The debate came in the third week of a campaign that has polls putting the Wildrose, NDP, and the Progressive Conservatives bunched together, with the Liberals a distant fourth. Voters go to the polls on May 5.

Prentice is fighting the Wildrose particularly in rural constituencies and in Calgary, while he is facing a stiff challenge from the NDP in Edmonton.

Prentice often turned his back to Jean during the debate, choosing to engage Notley.

Speaking with reporters after, the Tory leader called the discussions with Notley “useful” and said with Jean, “it was clear that he was not going to respond (to my questions).”

The Wildrose alternative budget would roll back tax hikes Prentice brought in right before the election. It would cuts thousands of management jobs and postpone some capital projects to balance the books by 2017.

During the debate, Prentice told Jean that the Wildrose plan doesn’t add up and suggested Albertans would pay the price in cuts to services.

“Jim, you’re fear-mongering. You are trying to say something that doesn’t exist,” Jean shot back.

“Page 5 of my budget clearly indicates where those cuts will come from,” Jean responded. “It’s itemized, it’s costed, it’s there.”

Liberal Leader David Swann chided Prentice and his Progressive Conservatives, in power since 1971, for wasting the billions of dollars in Alberta’s oil wealth.

“What has become very clear is that this government is failing Albertans. The PCs have blown through all our resource wealth in one generation,” said Swann.