De Grood admitted to the killings of five, but both the defence and the Crown agree he was suffering from a mental disorder at the time 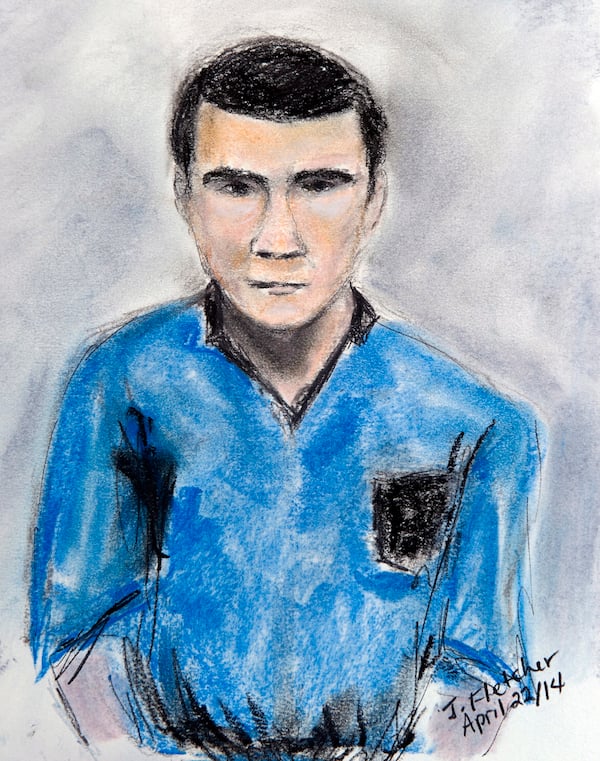 A sketch of Matthew de Grood, appearing in a Calgary court on Tuesday April 22, 2014, by artist Janice Fletcher, is shown. THE CANADIAN PRESS/Janice Fletcher

CALGARY – A Calgary man has been found not criminally responsible for killing five people in a stabbing rampage.

Macklin said he accepted findings from psychiatric experts who testified that de Grood did not appreciate his actions were morally wrong.

“I find on a balance of probabilities that at the time he caused their deaths, Matthew de Grood was suffering from a mental disorder that rendered him incapable of appreciating or knowing that his actions were wrong,” Macklin said.

MORE: For one father, it was no ordinary call of duty

The finding means de Grood will be kept in a secure psychiatric facility pending assessment by the Alberta Review Board.

The 24-year-old son of a police officer admits he killed five people at a Calgary house party on April 15, 2014.

The trial heard de Grood became withdrawn about a month before the attack and started posting about the end of the world, religion, vampires and Darth Vader on Facebook.

De Grood reported hearing voices telling him to kill before he grabbed a knife from a kitchen in the northwest Calgary home and stabbed the victims to death.

Defence lawyer Allan Fay said in his closing argument that his client believed he was defending himself from werewolves and vampires at the time.

Prosecutor Neil Wiberg said the experts concluded de Grood was not feigning his mental illness and was incapable of realizing his acts were morally wrong.

MORE: Remembering the victims of the attacks

De Grood is not the first high-profile case in Canada in which there was a finding of not criminally responsible or such a finding was sought. Here are more:

Gregory Despres: Fatally stabbed two elderly neighbours in Minto, N.B., in 2005, decapitating one of them. Despres, a naturalized U.S. citizen, had crossed the border despite guards finding him with a small arsenal including a chainsaw, a sword and brass knuckles. He told them he was an assassin on a military mission. Three psychiatrists diagnosed him with paranoid schizophrenia. He was found not criminally responsible in 2008. He is detained in a psychiatric facility inside the Dorchester Penitentiary.

Elaine Campione: Drowned her daughters, ages three and 19 months, in a bathtub in 2006 during a custody battle with her ex-husband. Doctors diagnosed the Barrie, Ont., woman with unspecified psychosis, post-traumatic stress disorder from spousal abuse, depression and an eating disorder. The Crown successfully argued her mental illness didn’t prevent her from knowing right from wrong. Campione was convicted of first-degree murder and sentenced to life in prison with no parole eligibility for 25 years.

Glen Race: Pleaded guilty to the first-degree murder of Trevor Brewster and second-degree murder of Paul Michael Knott. Race suffered from schizophrenia and was not taking his medicine in May 2007 when he lured the Halifax men to their deaths in separate incidents. Court was told Race believed he was a vampire slayer and a god-like entity at the time of the killings. He was found not criminally responsible, based on a joint recommendation from the Crown and the defence.

Allan Schoenborn: Killed his three children, ages 10, eight and five, in Merritt, B.C., in April 2008. Schoenborn was diagnosed with delusional disorder and said he killed the children to protect them from an imagined threat of sexual abuse. He was found not criminally responsible and is in a psychiatric hospital in Port Coquitlam. He has been granted escorted day passes from the facility but now faces an application from the Crown to have him designated a “high-risk accused,” which would force him to wait longer to ask for more freedom.

Vincent Li: Fatally stabbed and beheaded Tim McLean, the young man sleeping next to him on a Greyhound Bus in Manitoba on July 30, 2008. Li told a mental-health advocate he heard the voice of God telling him McLean was an alien who he needed to destroy. Li was found not criminally responsible and was sent to the Selkirk Mental Health Centre. Li saw his privileges expand slowly after his admission to the facility. In February 2016, Li, now known as Will Baker, won the right to eventually move out of a group home and live on his own.

Francis Proulx: Shot Nancy Michaud, an aide to a Quebec cabinet minister, in the head after taking her hostage while her two children slept in 2008. He took credit cards and banking information and had sex with her corpse. During his trial, he argued he was not criminally responsible because of a mental issue, saying he was on medication at the time of the crime. But he was convicted of first-degree murder and sentenced to life in prison with no chance of parole for 25 years.

Guy Turcotte: Fatally stabbed his three-year-old daughter and five-year-old son in 2009. The Quebec cardiologist was found not criminally responsible and was sent to a psychiatric hospital in Montreal and released in December 2012. An appeals court overturned the verdict; last year, Turcotte was found guilty of second-degree murder and sentenced to life in prison with no chance of parole for 17 years.

Miloslav Kapsik: Bludgeoned his wife to death with a hammer, hitting her more than 100 times while they were watching a hockey game in 2010. Court was told he had been hearing voices and medical records showed the Winnipeg man was first diagnosed with severe depression in 2003. The defence’s attempt to argue he was not criminally responsible was unsuccessful. He is serving a life sentence for second-degree murder, with no eligibility for parole for 10 years.

Richard Kachkar: Stole a snow plow in the early morning of Jan. 12, 2011, and in the middle of a two-hour rampage with it he hit and killed Toronto police Sgt. Ryan Russell. Witnesses heard him yell about the Taliban, Chinese technology and microchips. He was found not criminally responsible and is held in the secure unit of a mental health hospital near Toronto. Last summer, he lost his bid for unescorted passes into the community but won a move out of the secure unit of his hospital and accompanied visits of up to 10 hours in Durham Region.

Luka Rocco Magnotta: Killed and dismembered Chinese exchange student Jun Lin in May 2012. Experts testified Magnotta is schizophrenic and was psychotic and out of touch with reality the night of the slaying. But prosecutor Louis Bouthillier said Magnotta had made a promise several months earlier to take the life of a human being. He was found guilty of first-degree murder.

Trevor Kloschinsky: Killed Alberta peace officer Rod Lazenby, 62, who had come to his rural property in August 2012 investigate a dog complaint. Kloschinsky was charged with first-degree murder but found not criminally responsible. Queen’s Bench Justice Beth Hughes ruled Kloschinsky’s delusional thinking prevented him from realizing what he was doing was wrong. He is being held at a mental hospital and is subjected to annual reviews.