Mayor: 'This is the news that nobody wanted to hear'

BLAIRMORE, Alta. — A candlelight vigil meant to lend hope and support in the search for a missing two-year-old girl dissolved in grief Tuesday night as RCMP informed the crowd that investigators had discovered human remains.

As an official with victims services announced the Amber Alert for little Hailey Dunbar-Blanchette had been cancelled, one young woman crashed into a friend’s arms and sobbed. Others sniffed quietly and wiped away tears. Some just stood in stunned silence.

A group cocooned Hailey’s grandmother in an embrace.

“This is the news that nobody wanted to hear,” said Crowsnest Pass Mayor Blair Painter. “This is going to devastate our community and it’s going to take us a long time to heal from this.”

The tragedy began to unfold in the wee hours of Monday morning when Hailey’s father, Terry Blanchette, 27, was killed in his home and his daughter was taken away in a speeding white van.

Charges are now pending against a 22-year-old man from Blairmore, 220 km southwest of Calgary. 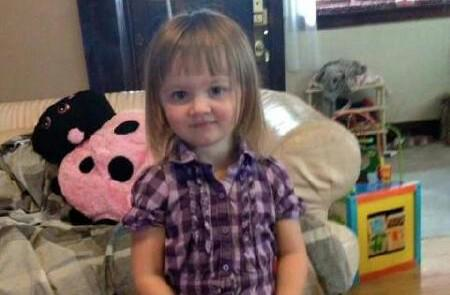 “It is my very sad duty to inform you that we have found the body of two-year-old Hailey Dunbar-Blanchette in a rural location near Blairmore,” RCMP Supt. Tony Hamori told a brief news conference late Tuesday night.

He declined to take questions, saying more information would be released Wednesday morning. He did say officers were at the scene where Hailey had been found and were processing evidence.

He thanked RCMP personnel for their “determination and professionalism” in handling the investigation.

“I can report that media and social media engagement on this disturbing case has been very helpful to the investigation. This speaks to the power of the greater community’s collective efforts in the support of public safety.”

Hamori said the name of the suspect who was taken into custody on Tuesday would not be released until after charges had formally been laid.

Blanchette was described by friends and family as a devoted single father who shared custody of Hailey with his former girlfriend, Cheyenne Dunbar, who lives in Edmonton.

He worked as a cook in a restaurant and had many criminal convictions between 2010 and 2012 for issues such as failing to appear in court, failing to stop his vehicle, evading police, minor theft and assault.

But after Hailey was born, there were no more court appearances. Blanchette’s Facebook posts switched from talk of court dates to pictures of him with his baby daughter.

“He was taking good care of her. There was always laughing and giggling going on over there.”

“Police have been speaking with her and obviously, at this point in time, followup investigation is going to be done on all information we receive.”

Tuesday night’s vigil had started out with a group wearing yellow arm bands talking about searching the nearby woods together for Hailey.

Candles and stuffed animals covered a picnic table by a playground just around the corner from the home where Hailey had lived. A pink sign with a single teddy bear attached read:”Please bring our baby Hailey home safe.”

A group sang a reworked version of the old spiritual “Kumbaya” — “A girl is missing, my Lord, Kumbaya … bring her back to us, Kumbaya.”

Roxanne Michalski, who helped organize the vigil, said the situation was simply unthinkable.

“It’s horrible to think that somebody had the mindset to be so terrifying,” she said.

The news also swept across social media, prompting an outpouring of sadness from across the country.