Hawkes, a spiritual leader of Toronto's gay community, has been charged with indecent assault and gross indecency 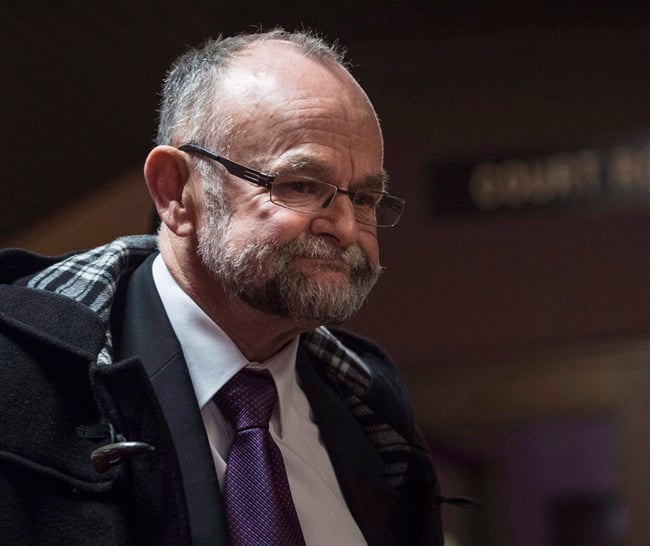 Toronto pastor Brent Hawkes arrives at provincial court in Kentville, N.S. on Thursday, November 14, 2016. An expert witness is expected to take the stand today in the trial of a prominent Toronto pastor accused of performing sex acts on a teenage boy more than 40 years ago in Nova Scotia. (Darren Calabrese/CP)

KENTVILLE, N.S. – The nature and fallibility of memory was the focus of Brent Hawkes’s gross indecency trial on Monday, in a case that has seen witnesses recounting events that happened more than 40 years ago.

Timothy Moore, chair of the psychology department at York University’s Glendon College, testified that it is not uncommon for people with gaps in their memories to unconsciously insert memories and adopt them as real.

“Memories can undergo a substantial amount of modification over time and the longer the time, the more opportunity for misinformation to occur,” Moore, an expert witness who was called by the defence, said in a courtroom in Kentville, N.S.

He spoke about “imagination inflation,” a phenomenon in which someone imagines an event in their mind and over time believes it to be true. Moore said it is not uncommon and can be self-generated.

Defence lawyer Clayton Ruby noted that the complainant in the case said his memories of the alleged incident continue to evolve, and Moore said that was a “red flag.”

Under cross-examination, Crown lawyer Bob Morrison noted that Moore said people tend to remember events that are unique, significant or personal, and that incoherent or incomplete memories are not necessarily false.

“Would an example of that kind of memory be a group of high school students going to a party and one of them observing a teacher performing oral sex on another participant of the party?” asked Morrison.

The charges of indecent assault and gross indecency stem from events in the mid-1970s, when the Toronto pastor was a teacher in his mid-20s in Nova Scotia’s Annapolis Valley.

Last Tuesday, a man testified that when he was about 16 years old, Hawkes led him down a hallway during a drunken get-together at his trailer in Greenwood, N.S., and forced oral sex on him in a bedroom.

Hawkes, a prominent rights activist, has denied the allegations and pleaded not guilty.

The accuracy of the complainant’s memories and the memories of two other witnesses have been questioned by Ruby throughout the trial. All three men have said they recall some things about the day in question, but other parts are foggy.

Moore said it is well-known that liquor can impair memories, and an alcoholic blackout can lead to their fragmentation and to assumptions that could be conflated with actual memories.

“It would be improbable that the person would be aware of the fragmentation of their memories,” said Moore.

But he also said that some are true memories.

“Some of our memories are recollected with high fidelity. I don’t think anyone would dispute that,” he said, adding there is no way of telling true memories from illusory memories, as people can recount both with great detail.

Originally from Bath, N.B., Hawkes has been the senior pastor at the Metropolitan Community Church of Toronto for 38 years. Considered one of the spiritual leaders of Toronto’s gay community, he is also known as a vocal proponent of same-sex marriage, and in 2007 was appointed to the Order of Canada.

The judge-alone trial continues Tuesday with the Crown expected to call rebuttal evidence on whether alcohol was served to students at Hawkes’ home. Hawkes has denied serving alcohol to minors on the day in question.