Meng Wanzhou is ready for her close-up

Image of the Week: The Huawei CFO does a cheeky photo-op on the eve of the court decision that will determine her future 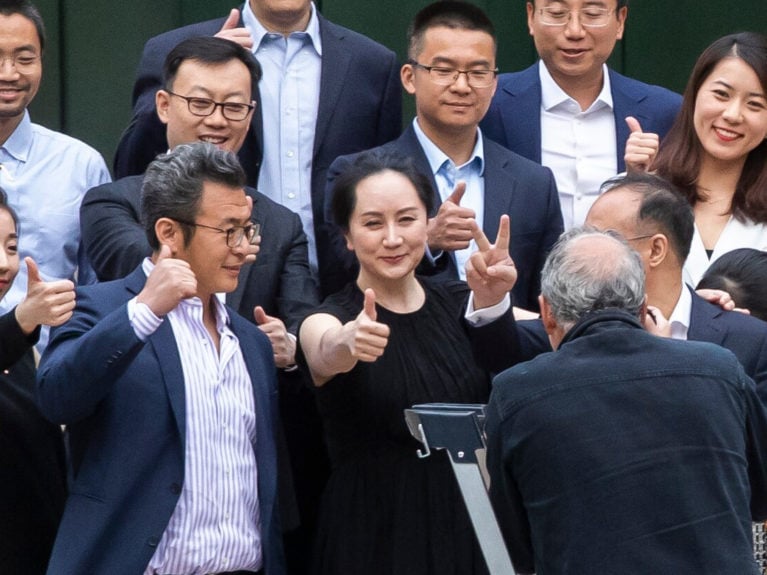 Meng Wanzhou poses with friends and family on the steps of the Law Courts building in Vancouver. (Ben Nelms/CBC)

The final chapter in a nearly two-year-long battle between Canada and China may have just begun with a cheery thumbs-up. On Saturday, Meng Wanzhou, the chief financial officer of Chinese telecom giant Huawei and daughter to its billionaire founder, surprised the public by showing up on the steps of B.C.’s Supreme Court in downtown Vancouver wearing a sleek black dress and a broad smile. The ruling was days away, yet a confident Wanzhou, surrounded by a posse of supportive friends and family, waved, gave the universal all’s-well sign and flashed the ankle bracelet that is evidence she’s still living under house arrest. But those arguably enviable detention conditions⁠—she’s confined to one of her two multimillion-dollar properties on Vancouver’s West Side; with the world under lockdown, surely few sympathize⁠—could end on Wednesday, when a judge will rule whether Canada should extradite Wanzhou to the U.S. to face charges of fraud. Her arrest on Dec. 1, 2018 and subsequent detention sparked significant tensions between Ottawa and Beijing: China quickly arrested two Canadians, Michael Spavor and Michael Kovrig; the federal Liberals sacked their ambassador to China after he sided with the wrong team; and a national debate heated up over whether to allow Huawei to help build Canada’s 5G network. Prime Minister Justin Trudeau has so far refrained from attacking China’s handling of the COVID-19 outbreak, perhaps sensing an opportunity for the two nations to warm relations up a bit. But if Wanzhou ends up extradited, Trudeau may have to rethink any visions of rapprochement. The Chinese government certainly will.