The trial of a Canadian soldier raises troubling questions 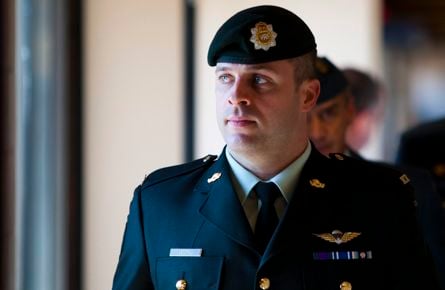 Capt. Robert Semrau is facing a military court-martial—and the possibility of life behind bars—for allegedly executing a severely wounded Taliban fighter. According to the prosecution’s version of events, the 36-year-old was bound by both international law and the Canadian Forces Code of Conduct to administer First Aid, but decided to fire two bullets into the man’s chest instead.

From the comfort of a courtroom in Gatineau, Que.—where tracer fire isn’t flying and flak jackets aren’t required—the Crown’s case seems simple enough. Mercy killing, regardless of the circumstances, is strictly forbidden, and the rules of engagement clearly state that medical care must be provided to every casualty, friend or foe. But as the latest witness made abundantly clear, the heat of battle has a way of messing with the best-laid plans.

Warrant Officer Merlin Longaphie, Semrau’s second-in-command during their Afghanistan tour, testified Tuesday that he saw the unidentified Talib shortly before the captain’s fateful encounter. Like Semrau, Longaphie was part of an Operational Mentor Liaison Team (OMLT) assigned to advise members of the rag-tag Afghan National Army, and on the morning of Oct. 19, 2008, they were conducting a major sweep through Taliban territory in Helmand Province. Under fire from enemy insurgents, Longaphie and his unit had just finished sprinting to safety across a large cornfield when he noticed a commotion 25 meters to his right. “It appeared to me there was a body on the ground,” he said on the witness stand. “Some other Afghans, two or three, were looking at the body and lightly kicking it.”

Capt. Thomas Fitzgerald, one of the prosecutors, wanted to know why Longaphie didn’t rush to treat the man—reminding him of his legal obligations under the Geneva Conventions and the military’s code of conduct. “If the person on the ground back there was a Canadian soldier, would you have done something different?” Fitzgerald asked.

After an angry objection from Semrau’s lawyer, Fitzgerald rephrased the question. “Why didn’t you move closer?”

“At the time I didn’t think there was a need to go over there,” Longaphie answered. “Visually, from what I perceived, it was a dead Taliban and there was no reason for me to go over and confirm whether he was dead or alive.”

Two other men—a private under Semrau’s command and an Afghan interpreter named “Max”—have told military prosecutors that the mangled enemy fighter was indeed breathing, and that the captain put him out of his misery. Longaphie didn’t witness the alleged crime; he had moved on from the scene by the time Semrau supposedly aimed his C-8 at the man’s heart. But if nothing else, his testimony was a poignant reminder that combat is not court, and just because the rules dictate that every injured foe must be treated, that doesn’t mean it happens.

Whether that helps Capt. Semrau remains to be seen. Failing to double-check a supposed dead body is one thing. Pumping two rounds into an unarmed man is quite another.

The government claims that Semrau subscribes to a so-called “soldier’s pact”—an unwritten code that says if he is too maimed to be saved, it’s up to a fellow warrior to put him to ease his pain and finish the job. If prosecutors are correct, Semrau extended that pact to the enemy, using it as an excuse to execute. “No one should suffer like that,” he allegedly told one subordinate.

This is the first time a Canadian soldier has been accused of homicide on the battlefield. He faces four charges in all, including second-degree murder, which carries a mandatory life sentence with no chance of parole or ten years.

A father of two young daughters, Semrau has pleaded not guilty to all counts. His trial continues Wednesday morning.