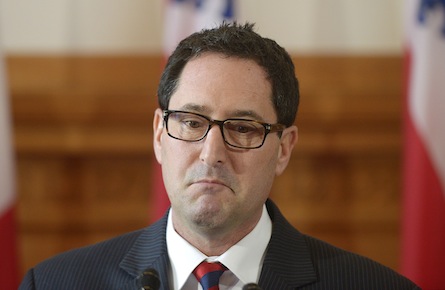 MONTREAL — Former Montreal mayor Michael Applebaum has failed in his bid to have his fraud case dropped, meaning his trial will begin as scheduled this fall.

Applebaum was arrested in June 2013 on various fraud-related charges linked to alleged real-estate bribery when he was mayor of the borough of Cote-des-Neiges-Notre-Dame-de-Grace.

Applebaum was arguing the prosecution committed an error by not relaying notes from conversations between police officers and a key Crown witness.

The Crown replied the notes in question didn’t exist because the police stopped taking them when the investigation ended and that the conversations did not deal with the facts of the case.

But he said nothing suggested that Applebaum’s right to a full and proper defence had been violated.

Applebaum had previously hoped for a stay of proceedings and argued the scheduled date for the trial to get going — September 2017 — was too far down the road.

Applebaum also said he was finding it difficult to earn a living as a real-estate agent because of the 14 criminal charges he faces.