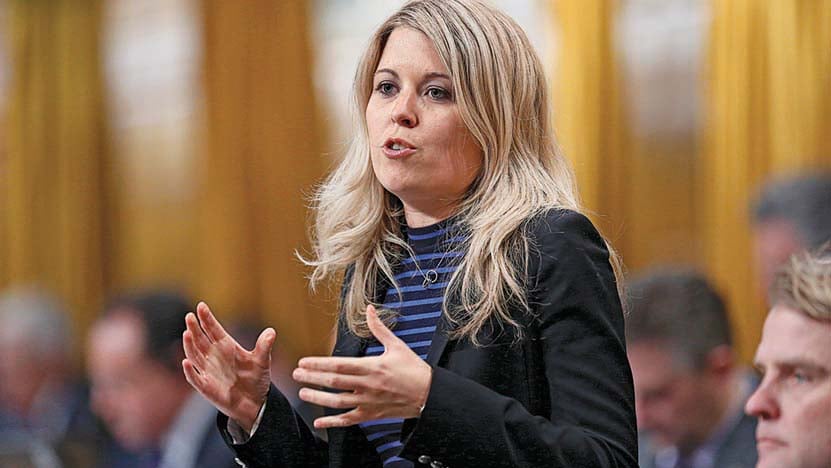 Visas in exchange for beef. Seems like a pretty good deal, right? Not according to immigration critic and Conservative MP Michelle Rempel. On Tuesday, Prime Minister Justin Trudeau announced he would be lifting the visa requirement for Mexican travellers as of Dec. 1—requirements put in place in 2009 by Stephen Harper to reduce asylum claims coming from that country. Trudeau’s Mexican counterpart, President Enrique Peña Nieto, announced Mexico would open its borders to all Canadian beef products—a ban that’s been in place since 2003 in response to the mad cow disease outbreak in Canada.

Wednesday, at the North American leaders’ summit press conference, Trudeau reinforced the importance of how “working together always beats going it alone,” and that includes improving relations with Mexico. Rempel spoke to Maclean’s about why she thinks this decision could be damaging to the integrity of Canada’s immigration system.

Q: You’ve been quite vocal about your opposition to this move to lift the visa requirement. Can you explain your stance?

A: There’s no doubt that Canada and Mexico have an important bilateral relationship. However, there are serious concerns our previous government had in regard to the visa situation with Mexico, which is why we put the visa requirement in place. Things like the very high level, abnormally high levels, of asylum claims, the large majority of which turned out to be false. There’s a significant cost to processing these.

There are security concerns with regard to the integrity of the Mexican passport issuance system that can’t be overlooked. This is not a political decision. We put that visa requirement in place, not lightly, because obviously there are trade implications.

For the government to make a political decision about the visa requirement I think will set very bad precedent. There are other countries that would like to see their visa requirements lifted, and now the Prime Minister’s going to have a difficult time saying to them, ‘Well, we have a formal process that you go through.’

For all of those reasons, this is a very short-sighted decision and I think the Prime Minister would have had the will of the country to take a more measured approach, and he chose not to.

Q: So you don’t think as of Dec. 1 the requirement will actually be lifted?

A: Well, I think that he said that it will. My position is that we don’t see any proof as a country that there’s been any progress that’s been made by the Mexican government on changing some of the situations that led to the visa requirement being put in place to begin with.

The onus is both on the Mexican government to immediately correct some of these issues, but now the Canadian government is in a difficult position, because what happens if they don’t? Are we actually going to reverse this position? I’m not sure. I think this is a very bad and short-sighted decision, to have lifted it this quickly without those checks and balances in place.

Q: One of the benefits that came out of this is Mexico lifting the ban on Canadian beef. Do you think it would have been possible to negotiate that deal without lifting this requirement?

A: The reality is the government has an onus both to ensure that we have openness of borders to trade products, but also to ensure the integrity of our immigration system. So we shouldn’t be trading one off for the other. I think free trade is very important, and I think we have many exports [for which] the Mexican market is an excellent trade opportunity for us. But that said, the cost to the Canadian system of processing asylum claims that are ineligible and false, as we’ve seen in previous years, is very high.

Moreover, I’ve been asking the minister in the House about the integrity of the Mexican passport-issuing system. The fact that we have not had any assurance that that situation has improved, in some cases maybe the opposite, I think that’s a big security concern for the country as well.

Q: Won’t that be something the government will work on in the next six months?

A: Well, why hasn’t the government worked on it in the last eight months? We have been asking these questions at committee over and over again. We’ve been asking department officials how the review was progressing. The review isn’t complete.

Q: With everything happening in Britain, the world is looking at North America, these three countries, to be united. How do you think this played out in that context? Do you think Brexit influenced at all the decision to say that this requirement was going to be lifted?

A: I don’t. I don’t think any congruency can be made, because this is about the relationship between Canada and Mexico. And the reality is that there was a visa requirement put in place in Mexico because of significant concerns around the level of asylum claims as well as security concerns.

Q: What kind of conditions would you like to see if the requirement is lifted…

A: Well, I can guarantee you that I will be regularly querying the government on the level of asylum claims after the visa [ban] has been lifted to see if there is indeed a large spike.

Q: Seven, eight years ago, these fears were very real, but since then, it’s been touted as this controversial move by the Stephen Harper government. What’s changed?

A: Wouldn’t it be nice to know. This is why we have an evidence-based approach for lifting visa requirements.

To me, the responsible way to dealing with this would have said, ‘These are the concerns. This is the current status of those concerns, in terms of a formal parliamentary review.’ And then, ‘Here’s the roadmap going forward on how we’re going to work through our bilateral relationship with the Mexican government on addressing that toward the goal of lifting the Mexican visa requirement.’

I think what the Trudeau government has really done here is taken away a key tool of our immigration system, in terms of working through these issues on a bilateral basis with some of our key trading partners, and I think that’s really short-sighted. I’m flabbergasted. We shouldn’t be making quid pro quo deals with national security and the integrity of our immigration system.