Mike Duffy takes the stand, as the witness becomes a raconteur

The Mike Duffy trial starts its grand finale as the Ol' Duff himself takes the stand, offering bounteous tales when quizzed by his own lawyer 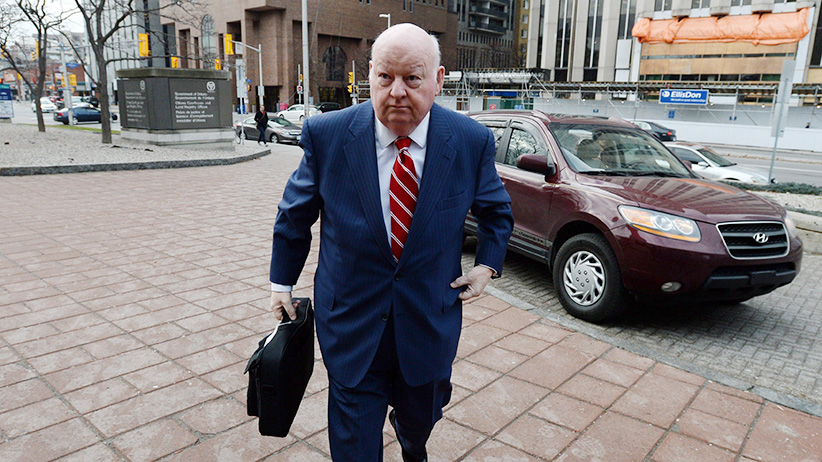 For weeks the denizens of Courtroom 33 debated among themselves whether they’d get to hear from Sen. Mike Duffy at all.

Today, almost without warning, we heard from two.

The little warning we did receive came in the form of the beautiful clothes that Duffy, his wife Heather, and his lawyer Donald Bayne wore to court. Duffy broke out the creamy blue pinstripe, Heather a tweed skirt—perhaps her first slack-free ensemble of the trial—and Bayne the dark fitted number.

This resplendence meant, so the speculation went, that Duffy would either testify, or hold an end-of-day press conference to detail exactly why he wouldn’t, today or ever.

Those of us in the courtroom focused on dress, and on the overall optics cultivated by the defence at Ottawa’s Elgin Street courthouse, because that was all we had to go on. Bayne, the flamboyant defence lawyer, had all along declared his intention of calling his client, here charged with 31 counts of fraud, breach of trust, and bribery. Yet as the Crown’s case wound down these past weeks, Bayne retreated and went “opaque,” to lift a word Bayne himself used in speaking to a reporter yesterday.

All of it suggested a bangless end to these proceedings, a conclusion heralded by a pathetic whimper three months after this trial was driving news cycles and haunted Stephen Harper’s Conservatives in a tightly contested federal election. Since November, Courtroom 33 has seen only sluggish progress in the presentation of evidence, and little public interest. Now it appeared we’d not even get the grand capping narrative of Duffy in the witness box that Bayne had promised from the beginning.

But it appears Bayne was being deliberately enigmatic in broadcasting uncertainty about whether Duffy would testify.

As far as spectators knew, as far as even the Crown’s camp knew, the first Duffy we saw this morning could very well have been the last—and he would have appeared thanks to video footage presented by prosecutors as a sort of coda to their case.

They conjured this Duffy up so that he flickered on the television sets around the courtroom.

He was plumper than the man who sat here in the corner, and more animated. This TV Duffy was appearing way back on Feb. 22, 2013. Under questioning by CBC broadcaster Bruce Rainnie, he committed to returning the dubious expenses he’d claimed as senator for Prince Edward Island while on “travel status” at his home in Kanata, where he had actually lived for years. “I would never knowingly fiddle anything,” he told Rainnie.

Bayne wanted to remind everybody that the man on the screen—his client before he was his client, when he was still, irony of ironies, best known as a broadcaster—had, moments before, written an email to Ray Novak, Stephen Harper’s most important aide, and pleaded with him not to make him read this PMO-generated mea culpa.

“Ray. I am cooked. I did nothing wrong,” Duffy wrote Novak.

Mark Holmes, the lead prosecutor here, told Justice Charles Vaillancourt that Bayne ought leave that for argument at the end of the case.

Meanwhile, Duffy, the man in the courtroom, looked like a different person than his old TV self—older, wizened, less sure of himself.

“And with that, the Crown closes its case,” Holmes then announced.

It was the 53rd day of trial, eight months after Duffy pleaded not guilty to the charges.

Therefore it was strange to hear Bayne call Michael Dennis Duffy to the witness box, causing the atmosphere in the room to contract.

Duffy swore on a Bible, sat down, and began to spin a narrative grand enough that it encompassed the Fathers of Confederation, the Napoleonic Wars that drove migrants to the Maritimes, and County Monaghan, which abuts Northern Ireland, and which spawned a branch of his own family.

He spoke of his success as a journalist, won through hard work, despite the fact that he “wasn’t a particularly great writer and I wasn’t particularly talented.”

Duffy broke down in tears as he described the “lost decade” after he divorced his first wife and lost daily contact with his children.

He told court how he hasn’t spoken to his son or daughter since being charged in this criminal matter, it appears upon the advice of his lawyer. His relationship with his daughter remains especially strained. “If it wasn’t for Facebook I don’t think I’d know very much about what Miranda’s doing,” he said.

Duffy described in detail his health challenges too, which involve a bad heart, “sludge” in his liver, sleep apnea, several surgeries, multiple medications, and the diabetes that requires him to inject insulin each morning, and prevents him from appearing in this courtroom any earlier than 10 a.m.

“Nothing in my life, Mr. Bayne, has been simple or straightforward,” he told court.

Perhaps more crucially, Duffy’s testimony, led by his own lawyer’s gentle questioning, began to revolve more and more around a portrait of Stephen Harper, this country’s former prime minister, as very much up on all the details surrounding Duffy’s appointment to the Senate.

Duffy said that Harper was initially intrigued by his ideas for how to reform the Senate—”you’ve got to cure it or kill it,” Duffy told the PM, in part, while still a journalist with CTV—and the PM later asked Duffy if he owned property worth more than $4,000 in P.E.I., one of the only constitutional hurdles that must be cleared for Senate eligibility, at least as far as Harper appeared to be concerned.

What were Duffy’s plans, anyway, the PM asked (how flattering!)?

Duffy said he would one day retire from broadcasting and relocate to P.E.I. Why not speed that up and agree to join the Senate as a Tory, the PM wanted to know—become a senator as a means of fast-tracking P.E.I. residence?

Duffy told Harper that Islanders would resent someone who’d lived away so long taking up the position, and suggested he’d want to be a senator for Ontario. And added that as a journalist he’d prefer to sit not as a Conservative but as an independent.

Somehow, Harper managed to twist his arm on both counts.

“They’ll get over it,” Duffy said Harper told him of the residency naysayers.

Duffy is not a pliant witness. He talks over even his own lawyer, and is expansive when it is clear Bayne would prefer him to be less so (Bayne could today be heard trying to nudge Duffy away from a long anecdote about how the CBC got cameras into the Supreme Court in the 1970s, in vain).

It is clear there are those on Team Prosecution salivating at the prospect of seeing Duffy under cross-examinations. They will have to wait. Bayne will have his client in the box for the next several days.