Mike Duffy's lawyer on how he navigated the media circus 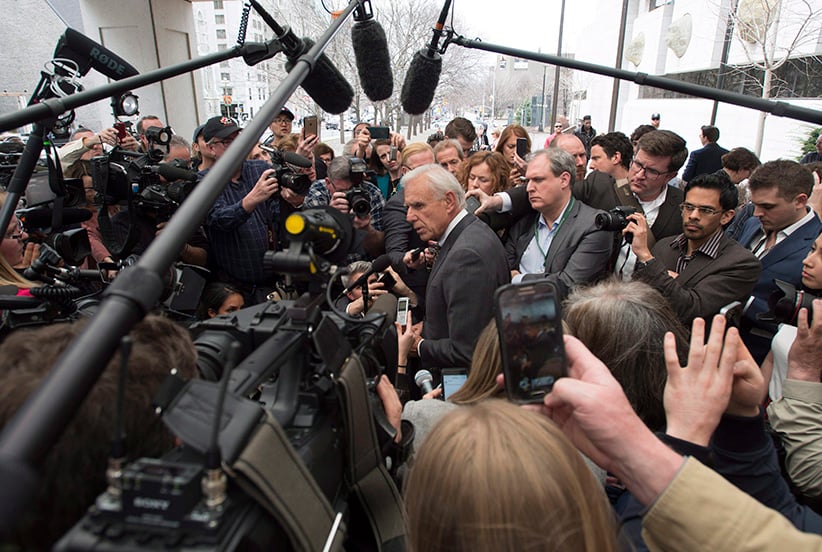 Sen. Mike Duffy’s lawyer Donald Bayne speaks with the media after Duffy was acquitted on all charges, Thursday, April 21, 2016 in Ottawa. (Adrian Wyld/CP)

OTTAWA — The lawyer who successfully defended Sen. Mike Duffy shared details Sunday of what is was like to deal with the “daunting” level of media interest during his client’s politically charged trial.

Speaking at the Canadian Bar Association conference, Donald Bayne recalled the pressure of walking to the Ottawa courthouse on the trial’s opening day through a gauntlet of reporters and news cameras.

Before reaching the mob, Bayne and Duffy, a former journalist, had an understanding to stay mum even amid the inevitable barrage of questions.

But the plan almost unravelled as the “moving sea” of microphones and cameras quickly closed in on them, Bayne recounted Sunday to an audience of lawyers.

“Mike turned to me, and this was on national television with every news agency in the country there, live, … and he blurted out, ‘Don, why don’t we just give them 10 minutes?’ ” Bayne said.

He said the intensity of that moment almost knocked Duffy off a game plan the senator had stuck to for about two years despite being hit by waves of negative publicity. Duffy’s strategy was to keep silent in the public sphere until his day in court.

“The honest answer is it’s daunting,” Bayne replied when asked during the conference what it was like for him, as a lawyer, to enter such a situation.

In April, Duffy was acquitted of 31 charges of fraud, breach of trust and bribery. Ontario Court Justice Charles Vaillancourt said Duffy’s actions weren’t criminal, even if they raised eyebrows.

The veteran attorney shared the anecdote during his appearance on a panel discussion titled “Litigating in the Court of Public Opinion,” an event that also featured Crown counsel Jocelyn Speyer.

Speyer, who represented the Crown during the Shafia family’s murder-conviction appeal and the Ashley Smith inquest, said as a lawyer it’s critical to plan ahead on how to deal with the media during a high-profile cases.

“It for sure adds to the stress level because it is one more thing to think about at a time when there are so many things to think about,” said Speyer, who added she supports the media’s need to report fully on what happens inside courtrooms.

“We recognize it’s necessary, but it is intensely distracting and it’s very nice to able to avoid it at that stage of the proceedings.”

As an example, she recalled how Crown lawyers arrived at the courthouse early in the morning — before reporters — ahead of the Ashley Smith inquest.

Speyer also worked on the appeal in the prominent murder cases of Mohammad Shafia, his wife Tooba Yahya and their son Hamed.

They were convicted in the June 2009 killings of Shafia and Yahya’s daughters — Zainab, 19, Sahar, 17, and Geeti, 13 — as well as Rona Amir Mohammad, 52, who was Shafia’s first wife in a polygamous marriage. Their bodies were found in a car at the bottom of the Rideau Canal in Kingston, Ont.

The heightened public interest in Duffy’s case was unique because it was political trial mostly covered by national political journalists, rather than court reporters, Bayne said.

Bayne said the added element of such a trial is that he had to manage a “public narrative” to the extent that he could.

“When the media develop a story line, that’s a ship like a cruise liner,” Bayne said.

“That’s very hard to turn around. They don’t like changing the story line. And the story line on Duffy from Day One was corrupt, greedy, fat, easily cartooned man.”

He said he tried to change the story line on Duffy by calling a news conference in October 2013, almost a year before his client was charged. The goal was to respond to Duffy’s looming suspension from the Senate by publicly releasing some pieces of evidence, he said.

The result of his effort was marginally successful at best, Bayne added.

“I frankly never thought there was a criminal case against Mike Duffy and I hoped that we could change the narrative in the Senate, who were driving this message of scandal and impropriety,” he said.

“And if we could change it there, we could stop the criminal process.”

Duffy was suspended from the Senate over his expense troubles, but the suspension was lifted last year when Parliament was dissolved before the federal election campaign.