Former heavyweight champ just the latest quasi-celebrity to back Toronto's on-the-ropes mayor, who is seeking re-election 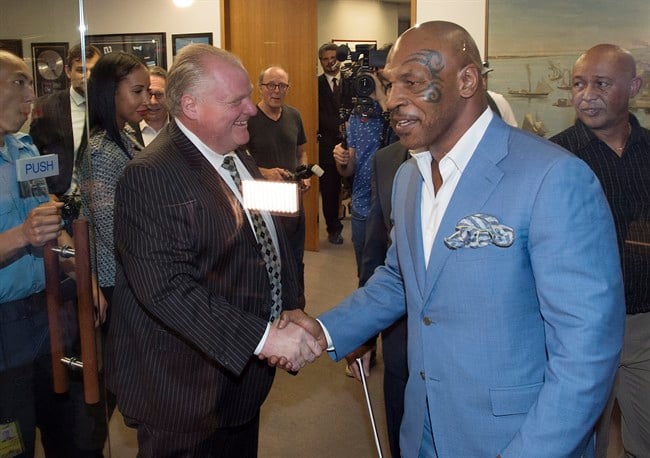 TORONTO – Boxing legend Mike Tyson took some jabs at critics of Rob Ford on Tuesday, defending the embattled Toronto mayor by saying “we all make mistakes.”

In a rambling exchange with reporters after meeting Ford at city hall, the former world heavyweight champion who has been convicted of rape, assault and drug possession said the mayor is always under the spotlight.

“He has a troubled past because he has 24-hour surveillance of the press … We’ve no idea what you do behind closed doors.”

Tyson dubbed Ford the “best mayor in Toronto’s history” and then asked if people would instead prefer someone “who’s clean-cut but behind the door you never know what he’s doing.”

Ford’s role as mayor has been largely symbolic since November, when city council stripped him of most of his powers following a string of controversies that included an admission that he had smoked crack cocaine in a “drunken stupor.”

He is seeking re-election after spending two months earlier this year at an addiction treatment centre near Bracebridge, Ont.

Ford said the meeting was held at the request of Tyson’s camp but when asked about Tyson’s checkered past, he countered, “You guys are perfect?”

That has been a familiar refrain from the mayor since he confessed to illegal drug use.

Ford said he’s long been an admirer of the boxer.

“We are cut from the same cloth. There’s no nonsense. I respect him,” Ford added.

Tyson is in Toronto for his one-man show Mike Tyson: Undisputed Truth on Wednesday, his first in Canada. Critics have called it a tale of redemption and forgiveness.

The ex-fighter has a long history of run-ins with the law, including serving three years in prison in Indiana for the 1991 rape of a Miss Black America pageant contestant. He was also convicted of assaulting two motorists following a traffic accident in the late 1990s.

Since the beginning of the election campaign, Ford has met a string of celebrities, including disgraced sprinter Ben Johnson.