Minutes obtained by The Canadian Press reveal cabinet meetings from the first half of 1990, when tense Meech Lake drama played out 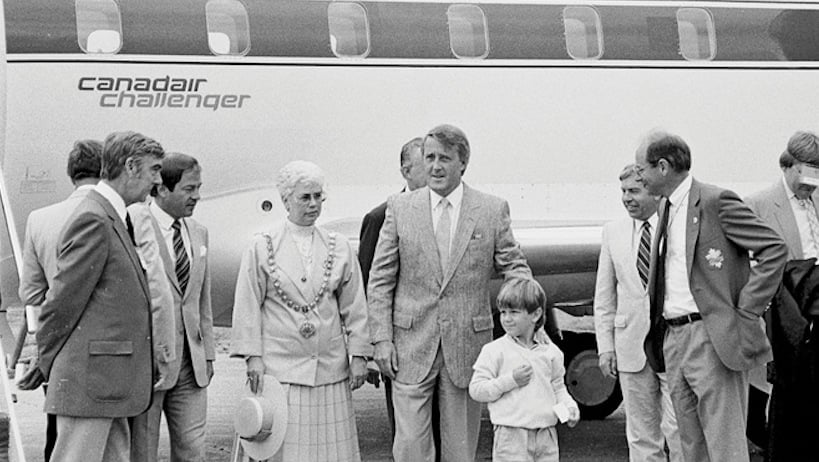 Brian Mulroney, centre, who was then prime minister, arrives for the opening ceremonies of the 1985 Jeux Canada Games in Saint John. (Dan Galbraith/Telegraph-Journal Archive)

OTTAWA – Newly released cabinet records show Brian Mulroney lashed out at Pierre Trudeau and other Liberals for engaging in a betrayal of the country as the Meech Lake constitutional accord collapsed.

According to the record of the June 22, 1990, meeting, Mulroney said Meech Lake had been obstructed and undermined by people who thought they had the right to govern forever.

Trudeau had helped sow the seeds of the accord’s eventual destruction, branding it a sellout to the provinces and Mulroney a “weakling.”

The Canadian Press fought for four years to obtain the minutes of cabinet meetings from the first half of 1990, when the tense Meech Lake drama played out.

The Meech accord was intended to meet Quebec’s conditions for embracing the Constitution, patriated in 1982 over the objections of the province’s then-separatist government.

The following are excerpts from minutes of meetings of cabinet and the cabinet committee on priorities and planning in the first half of 1990 as the clock ticked down on the ill-fated Meech Lake accord:

— March 7: Then-prime minister Brian Mulroney said he felt the accord would not pass by the June 23 deadline in its present form. He speculated that former Liberal prime minister Pierre Trudeau “didn’t want Quebec in the Constitution because it would be an admission of failure in 1981,” when Trudeau worked to repatriate the Constitution over the province’s objections.

Mulroney “commented on the irony that, even as the Berlin Wall was coming down, Canadians couldn’t seem to agree ‘even on one paragraph in the Constitution.'”

“The prime minister concluded by saying, ‘I am satisfied that we’re on the right side of history.'”

— April 24: “The prime minister also informed ministers that he had established a Meech Steering Group … to meet every day from now on. This steering group would act like an ‘election campaign headquarters.’ Specifically, it would act as a clearing house for reviewing new intelligence on an hourly and daily basis.”

— April 26: Mulroney declared Meech the government’s “top priority,” predicting “the impact would be enormous” if the accord failed. “Money would flow out of the country and Canada’s prosperity would suffer … The hardship would be, in his view, especially pronounced in Quebec.”

“The prime minister suggested that the situation warranted an election campaign mode of operation … There was a lot of misunderstanding and distrust in Quebec and in English Canada. There was also a lot of ignorance about precisely what was in the Meech Lake accord. Meech Lake had in fact become the symbol of a sellout to Quebec in the minds of some.”

— May 22: “The prime minister concluded the discussion by making the following points: The Meech Lake accord had been a noble initiative which had become sullied in the process of ratification. The five demands originally put by Quebec had become a shopping list for the other provinces and, as a result, the people of Quebec were unlikely to mourn the demise of the accord. Nevertheless, the failure of the accord would have serious consequences for the country and for the government.”

— June 21: Joe Clark, external affairs minister at the time: “There was a deep sense of crisis in Quebec and a need for an agreed government strategy for responding to Quebec should the accord fail. This would mean concentrating on the need to heal Quebec — not on the rest of the country, nor on further constitutional discussions. This would require concrete actions; it would not be good enough to utter soothing words.”

— June 22: Mulroney expressed hope it would be possible to move forward on the constitutional front in due course. “He knew that many of his colleagues were hurting, and he thanked them for their support at a very difficult hour in the nation’s history.”