And who Janine Krieber will be teaching

So then Harper’s cat said to Ignatieff’s cat . . .

More and more MPs have joined the social networking site Twitter, but keeping track of all the tweets can be cumbersome. That’s why 27-year-old Trevor May, a Vancouver-based Web developer, created politwitter.ca, a site dedicated to bringing together the tweets of Canada’s elected officials as well as political media types and commentators. It also includes satirical tweeters. One user posts from the perspective of Stephen Harper’s cat under the username cheddar_harper (the real Cheddar has been dead for quite some time), and another writes as Iggy’s cat Mimi under the username mimi_ignatieff. After Iggy’s recent election rallying call, cheddar_harper sent mimi_ignatieff this message: “Is ur dad serious about this election? I don’t want to move. Cats hate moving house so much.” Another satirical user called laytonsmustache once tweeted: “Jack just gave me a quick coat of ‘non-flammable’ factor 30 wax . . . looks like there’s gonna be some fireworks in QP today.”

Some MPs get their staff to Twitter for them but those tweets are usually easy to spot, says May, who adds that a good sign MPs are doing their own tweets is they often reply to other tweets and talk about being at an event. He says so far, unlike in the

U.K. and the U.S., no Canadian MP has gotten into hot water over a tweet. One of the top MP tweeters, according to May, is Vancouver Liberal MP Ujjal Dosanjh, who is in his early 60s. His aide Braeden Caley, who is on the executive of the Young Liberals of Canada, showed Dosanjh how to tweet a few months ago and the MP has never looked back. Dosanjh says tweeting is a great way to communicate in real time and that an MP’s life has many short time slots that are perfect to fill with tweeting. Twitter’s 140-character limit is also good for the MP, Dosanjh says, because he is a very slow typist. Another Twitter king (also prodded by his hipster aide, Jamie Ellerton) is Immigration Minister Jason Kenney, who says it is a great way to keep track of what members of his caucus have been up to and lends itself to more personal interactions. He had a flurry of Twitter activity when he tweeted how he was at an event next to the National Post’s Don Martin and jokingly noted that he was surprised the journalist was still sober. Other top tweeters are Heritage Minister James Moore, NDP Leader Jack Layton and Toronto NDP MP Olivia Chow who, May says, holds the record for the parliamentarian who posts the most pics on Twitter. At the NDP convention in Halifax, 35-year-old MP Megan Leslie attended a New Democrats’ Twitter party and got snapped at for only producing four tweets since joining the social networking site. She promised she would do more once the House of Commons allows the necessary application to be loaded onto her BlackBerry. 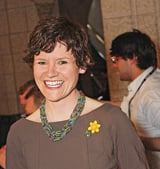 The city where MPs of all parties get along
Saint-Jean-sur-Richelieu is the Quebec city many MPs go to for French immersion. This summer Halifax NDP MP Megan Leslie opted for the maximum two weeks. Talking with her colleagues from other parties, she says, is remarkably non-partisan. That’s because their lack of French vocabulary limits them to more general, less political topics: “It’s more like, ‘How is your sister?’ ” The MPs are told by their professors to not speak any English.

Dion’s wife to teach soldiers in Afghanistan
Stéphane Dion’s professor wife, Janine Krieber, will be back at the Royal Military College in Kingston, Ont., this month, teaching three courses. For the first time, the terrorism expert will teach an online course also available to members of the Canadian Forces in Europe and those serving in Afghanistan. Due to the nature of active duty, she realizes some may have to drop the course or be late with their papers, but it’s divided into parts, which allows soldiers to pick up where they left off if they need to come back to it in another semester.