This weeks gossip from capital hill

The death of Transport Minister John Baird’s cat Thatcher caused international headlines when a “Thatcher’s dead” electronic message had Stephen Harper’s officials calling London to confirm whether Margaret Thatcher had in fact died. They discovered the former British PM was very much alive. The source of the confusion, Thatcher the cat, was a gift to Baird from four friends when he was a staffer in the Mulroney government. “She saw me through the defeat in ’93, then through four successful runs [provincially and federally],” says Baird. Thatcher even appeared on CTV News and Canada AM. No word yet if the transport minister will get another cat. Laureen Harper, who often fosters kittens at 24 Sussex, says Baird “needs time to grieve. Who knows how long that will take? But one day he will wake up and want a new four-footed companion. Until that time we have to wait.” 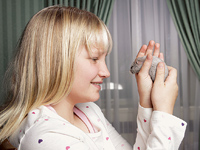 New pets, meanwhile, have moved in to the homes of party leaders. Rachel Harper got a new Russian dwarf hamster named Jasper. The latest 24 Sussex resident is “not too bright,” according to Laureen Harper, “but he loves Cheerios with peanut butter in the middle.” Liberal Leader Michael Ignatieff and his wife, Zsuzsanna Zsohar, got two kittens a while back and NDP Leader Jack Layton and his MP wife, Olivia Chow, recently welcomed two cockatoos into their Toronto home. The birds are yet to be named. Green Leader Elizabeth May says that when she moved to her new riding in Sidney, B.C., “I adopted a spider for a while. I called her Charlotte.” May’s dog Spunky went to university in Halifax with her daughter. Her cat Rosie moved with her to Sidney. Only one party leader has no pets, and never will. According to an official in Bloc Leader Gilles Duceppe’s office, “Mr. Duceppe has many allergies, so he can’t have any pets.” 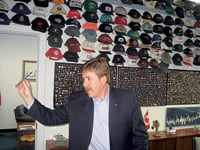 WHERE WAS THE HALL MONITOR?
NDP MP Peter Stoffer wanted to have a hall party to help increase the huge collection of hats and pins in his office. So huge is the collection that when he was asked to move offices a while back the officials took one look at the walls and told him to stay put. Hall parties are a tradition on the Hill. MPs often have them when a few decide to open their offices for a get-together and need the space for spillover. Unfortunately, at a recent bash an overenthusiastic partygoer threw up in the hall. Stoffer says he was told by Kevin Vickers, sergeant-at-arms of the House of Commons, that because of that incident there would be no more hall parties. 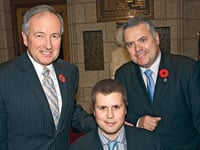 CRIME, JUSTICE and some CANNED TOMATOES
Neil Murphy, 22, has a front-row family seat when it comes to politics. He was recently on the Hill to visit his two MP uncles. Brian Murphy, a Liberal MP from New Brunswick, is Neil’s father’s brother. Justice Minister Rob Nicholson is his mother’s brother. Back in New Brunswick, Neil is doing a stint in Brian Murphy’s constituency office dealing with issues like crime concerns and other things constituents get upset about, like the person who came into the office demanding the health minister be called over a purchase of expired  canned tomatoes. Neil suggested the constituent speak to the supermarket first. 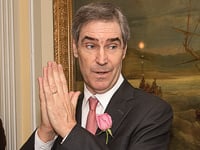 Iggy and the airport train
One of Michael Ignatieff’s favourite things to do in Vancouver is to take the SkyTrain’s new Canada Line, which carries people from the airport to downtown. He has done it twice now and promises he’ll always take it when he comes to town, even if he becomes prime minister. The RCMP may have something to say about that.