MMIW: An important step in stopping a national tragedy 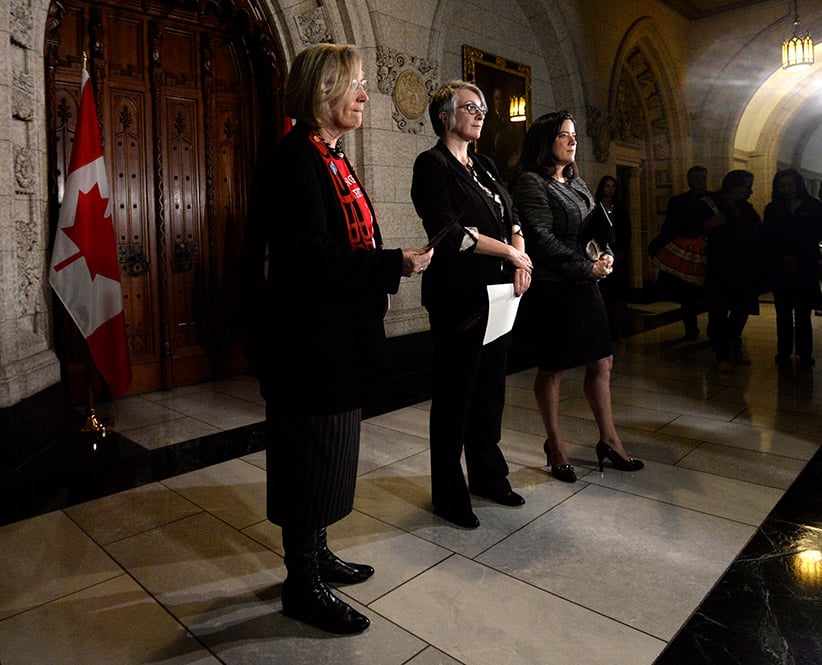 Seven years ago, Maria Jacko’s niece disappeared without a trace. Maisy Odjick, then 16, and her best friend Shannon Alexander, 17, were last seen at a relative’s house in Maniwaki, a community about 130 kilometres north of Ottawa. They left behind their wallets, clothes and ID and they were never heard from again. “We still don’t have any answers,” Jacko said in an interview with Maclean’s. “The police didn’t take this seriously enough … They were tagged as runaways right from the get-go.”

Jacko’s experience with the police investigation is one of the reasons she is hopeful the national inquiry into missing and murdered indigenous women will prevent other families from enduring the pain her family has suffered. Odjick is one of approximately 1,200 missing or murdered aboriginal women who came into focus this week as the Liberals announced part of the government plan to hold that inquiry.

“There wasn’t even an Amber Alert for them,” Jacko said of Odjick and Alexander. “They were 16 years old at the time and there should have been.”

After years of pleading with the federal government, aboriginal leaders and women’s advocates hope they are finally seeing the wheels of justice creak into motion. A trio of cabinet ministers set out the initial plan—to spend two months meeting with survivors, national aboriginal groups and the families of missing and murdered women to design a process for the inquiry. The new government has set itself no small goal. Asked Tuesday what would be the end result of the two-year process, Indigenous and Northern Affairs Minister Carolyn Bennett said the aim is to “actually stop this national tragedy.”

While the Conservatives refused to hold an inquiry (a position interim leader Rona Ambrose has since reversed), Bennett said the Liberals hope to spend a few months on the first listening phase, then announce the second phase, the actual inquiry, within six months. But the timeline isn’t firm.

“Phase one will be as long as it takes to get it right,” she said.

The budget seems equally uncertain. The Liberals pledged $40-million in their election platform, a number Bennett called a “placeholder,” telling reporters the actual budget won’t be known until the scope of the inquiry is established.

So far, that is music to the ears of advocates. Dawn Harvard, president of the Native Women’s Association of Canada, urged the Liberals to get the process right, advising them not to rush ahead simply to have action for action’s sake. “Obviously the families have to be key. They are absolutely integral to this,” she said.

Related: Why the AFN’s national chief wants the Liberals to consult before acting

On this front, the Liberals have learned from the experience of British Columbia’s Missing Women Commission of Inquiry, launched in 2010, which families of victims roundly criticized for not helping families appear before them by funding travel expenses. The Native Women’s Association of Canada, for example, had standing at the B.C. inquiry but—based in Ontario—couldn’t afford to attend. The lack of funding “was a fundamental mistake that resulted in a commission of inquiry in B.C. that was a big disappointment to a lot of people,” said Harvard.

Justice Minister Jody Wilson-Raybould is well-aware of these concerns, having been a regional chief with the Assembly of First Nations in 2011 when the AFN pulled its support from the B.C. inquiry over the lack of funding.

Financial help isn’t the only type of assistance needed for those who share their stories. Victims services is another concern, said Bridget Perrier, who adopted two children after their mother was murdered by serial killer Robert Pickton. One of them spoke at the B.C. inquiry and found the experience devastating. It “left my daughter really raw,” Perrier said. More than anything, establishing trust could be the biggest challenge.

Perrier fears only the most conciliatory speakers will be allowed to appear before the inquiry. “They’re going to go with the most complacent families,” she said. How does she know? “It’s always happened like that.”

Related: Joseph Boyden on the true meaning of truth and reconciliation

With fresh allegations of police abuse of First Nations women in Val d’Or, Que., where women allege Quebec police officers forced them to commit sex acts and assaulted them, racism is sure to have a starring role at the inquiry. “If we are going to expose how our women are put into unsafe situations, it’s important to start exposing those systemic issues,” said Harvard.

Seven years later, Jacko looks for her niece, still. Quebec police have updated sketches of Maisy and Shannon as they would look now, at ages 23 and 24. They show Jacko’s niece as a young woman, with a wide smile and shoulder-length hair.

Jacko sees that face in crowds. “I went to New York City last year and I looked for a second, and — you know how it’s so busy in New York City — I swore I saw Maisy,” she said. “There was this tall woman. I went to grab her and she was gone.”