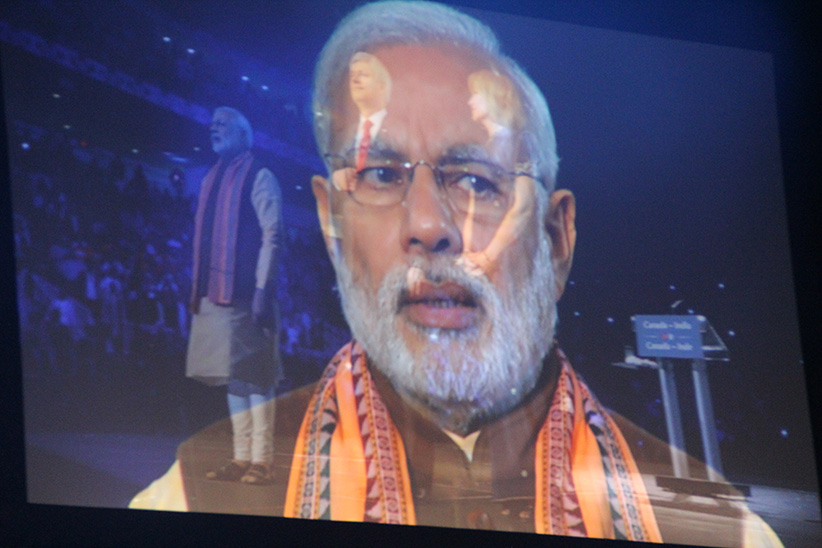 A two-hour prelude to the main act at Ricoh Coliseum on Wednesday evening was a rich and colourful ode to the diversity of Indian music and dance. And even as an almost-capacity crowd of diaspora Indians enjoyed the performances, there was little doubt that the real showstopper for this weeknight performance was the Indian prime minister, Narendra Modi. The crowd thundered with applause and chants of “Modi, Modi, Modi,” when he arrived.

Thousands of non-resident Indians and Indo-Canadians began gathering outside the coliseum mid-afternoon to hear Prime Minister Stephen Harper introduce Modi, as part of his three day diplomatic visit to Canada, the first such visit by an Indian head of state in 42 years. Harper called Modi a man of “humble roots and devout spirit” and reminded the crowd that Canada had been loyal to him during his darkest hours (a reference to the 2002 riots in Gujarat when Modi was chief minister).

With the exception of a few specific additions, Modi’s speech was not new. He spoke of many of the same issues that he had raised during his speech to a similar, though larger, congregation at Madison Square Garden in New York last year, reminding his audience of how much change has come in India during his 10-month prime ministerial record. “What did not happen in 42 years, I made happen in 10 months,” Modi told his enthusiastic audience, many of whom were from his home state of Gujarat.

Modi is known for his oratory skills, and he did not disappoint. He thundered for over an hour, a powerful combination of clear, appropriately spaced delivery interspersed with anecdotes, references to his accomplishments in office, and his vision for India’s future. Modi’s speech was aimed at recognizing and inspiring diaspora Indians and convincing them that that old, corrupt and stratified India that they knew had changed.

“There was a time,” he thundered, “When if you walked into a bank, the bank manager would not even look up from his desk at you…today, that bank manager has changed. Today, that manager travels to rural villages to help people open accounts.” Modi applauded the savings of rural account holders as the “wealth of the poor,” who he said had collectively saved about $2.8 billion in less than a year. Such stories of change, combined with his part-preacher, part-motivational speaker-style of delivery, guaranteed Modi a steady stream of chants, deafening applause and, at the end of the evening, a standing ovation.

Modi also announced a host of new agreements opening with the easing of visa and travel restrictions, the issue closest to his audience’s heart.  He topped up that good news with confirming that India and Canada would now be partners in nuclear energy as Harper and he had reached agreement to reopen Indian purchases of uranium. The Canadian uranium producer, Cameco Corp. will provide 3, 220 metric tonnes of uranium over five years to quench India’s rising energy needs. Modi hailed this $350 million deal as part of a new era of clean energy and strong Indo-Canadian relations, and thanked his audience for their contribution to these ties.

The atmosphere at Ricoh was carnivalesque with drumbeats and dancing, and plenty of saffron-hued paraphernalia: shirts with Modi’s image, headbands, posters and more. Canada’s former high commissioner to India and current head of the Asia Pacific Foundation of Canada, Stewart Beck, was one of the hosts of the evening. When the audience tired of repeat dance performances as they waited for a delayed Modi and Harper, Jason Kenney, Minister of National Defense and Minister of Multiculturalism took the mike to spur up the crowd with a smattering of welcome words addressed to India’s diverse religious and cultural communities.

Most of those who had come are associated with local chapters of Indo-Canadian clubs and associations. Among those in the crowd was Dharmesh Patel, 49, a civil engineer who attended with 12 other members of the India-Canada Association of Kingston, proudly stated that his hometown – Vadnagar – was the same as the prime ministers. “I feel great, “ he grinned. “ We all feel great. This is good for Indo-Canadian relations.” Patel repeated what many who had gathered said about their support for Modi. “ I don’t care about his party. I care about Modi-ji. He is a hard-working guy, and he is honest.”

Prabha PIchika, 36, an accountant from Brampton, who was at the event with her husband and her two boys, aged 6 and 7, had also come through a local Indian chapter organization. “[The boys] are very excited because they’re going to tell their friends in school that they saw the Canadian prime minister and the Indian prime minister on the same night.” Modi, she said, has been the kind of change India has needed for a long time. “He has a vision. He’s focused. I want him to bring back all the black money that our politicians have taken out of India.”

“Since 2003, Canada is that country that has been a partner of Gujarat, and it has maintained that relationship – because of this I am grateful to Canada,” Modi told his audience. “I leave tomorrow,” he paused for effect as the audience booed for the first and only time all evening. “But I will never forget Canada’s love.”