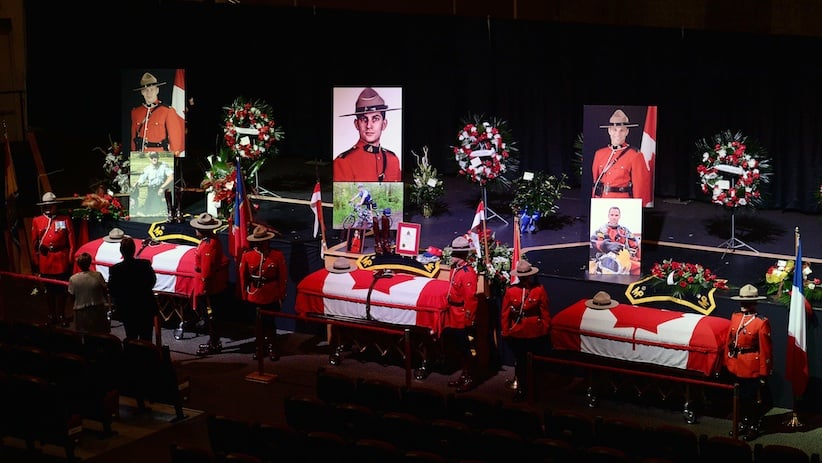 REGINA — Memories of the three Mounties fatally shot by a gunman in Moncton, N.B., last June were at the forefront of an annual service honouring officers killed in the line of duty on Sunday.

The names of Constables Dave Ross, Fabrice Gevaudan and Douglas Larche were inscribed on a cenotaph, honour roll and memorial wall plaques at the force’s training academy during the National Memorial Service.

Family members of the slain officers shared emotional memories. Dan Larche Jr. described how family was the focal point of his late brother Douglas’ life, and he “beamed” watching his three daughters growing up.

Being a Mountie was more than a job to Douglas Larche, his brother told the service. “He was very proud to be a member of the RCMP, to have a second family, to serve his Moncton community in whatever way he could or was asked to.”

Angela Gevaudan, the widow of Fabrice Gevaudan, reminisced about letters she received from her husband’s classmates at the academy and the common thread they shared. “Fab was the runner in the troop, he always finished first, but would circle back to also finish last, he never left anyone behind, that’s the kind of person he was,” Angela Gevaudan, who was joined by her daughter Emma, told the service.

“One night, I was crying, thinking about how incredible he was,” she said, her voice cracking.

Among the dignitaries who attended the service were RCMP Commissioner Bob Paulson and Saskatchewan Lt. Gov. Vaughn Solomon.

In a statement Paulson said the shootings were “a tragedy that was felt by residents of Moncton, Canadians across this country and every member of the Force.”

Two other constables were injured in the June 24 incident.

Justin Bourque, 24, pleaded guilty last month to three charges of first-degree murder and two counts of attempted murder. Bourque is to return to court Oct. 27 when victim impact statements and pre-sentencing documents will be filed with the court.