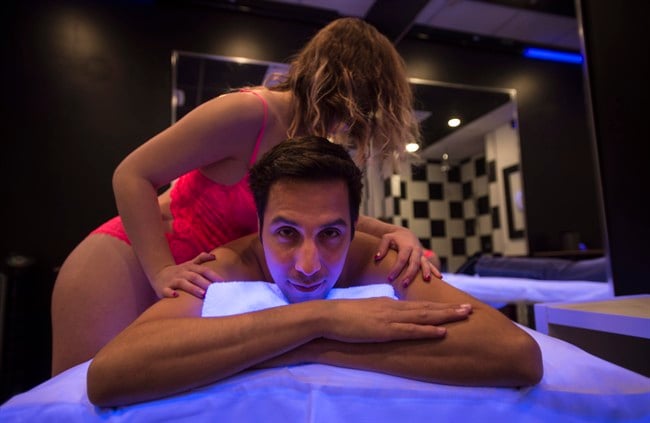 Without a firm policy, community groups and massage parlour owners say the police are letting the de-facto brothels operate under a tacit agreement: don’t hire minors, don’t force women to do anything they don’t want to do, and keep organized crime out of it.

“The police told me that their plan is to go after pimps employing minors, exploiting women, drug dealers,” Chicoine said. “One day a police officer told me: ‘We know what’s happening in your salon, and we prefer to see (prostitution) in this kind of place instead of on the street.'”

Mayor Denis Coderre had a plan to clean the city of the brothels but a Supreme Court of Canada ruling in late 2013 forced the government to re-draft the country’s prostitution laws and put the mayor’s ambitious plans on hold.

The mayor’s spokesman, Louis-Pascal Cyr, said discussions are ongoing between city officials, lawyers and local police as they develop an action plan.

How to deal with the issue is mixed: Chicoine and other parlour owners want prostitution to be decriminalized entirely while advocacy groups that deal with prostitution in Montreal are split.

Chicoine said his businesses are transparent, clean, safe and should be legal because prostitution will never disappear.

“We’re doing good stuff here,” he says. “The girls are happy the clients leave with a big smile.”

Dianne Matte, spokeswoman for CLES, a Montreal-based anti-prostitution advocacy group that helps women leave the sex trade, said the new laws on the books need to be enforced.

“We have women calling us and telling us horror stories of what goes on inside these places,” she said.

But Anna-Aude Caouette, who works with STELLA, a pro-sex worker community group that deals directly with Montreal prostitutes, said she fears that if the parlours are shuttered, workers would go underground and it would be extremely difficult to find and help them.

The Montreal police chief inspector in charge of the city’s strategy on combating prostitution said no such order to ignore massage parlours exists.

“If there is a complaint or what have you, about a massage parlour, we will intervene,” she said.

Paquin did confirm that businesses such as the one operated by Chicoine aren’t necessarily the department’s main focus.

“We have priorities,” she said. “However, for the rest (of the massage parlours) there hasn’t been an order to stay away.”

Chicoine said, at least for the moment, police are staying away from him.

One of his employees, Rebecca, a 23-year-old masseuse, said no one employed at Chicoine’s establishment is forced to do anything they’re uncomfortable with.

“It’s better for certain people to be here than to be in the street,” Rebecca said. “Here we’re protected. If a client is making us feel uncomfortable, we can get help from the receptionist.”