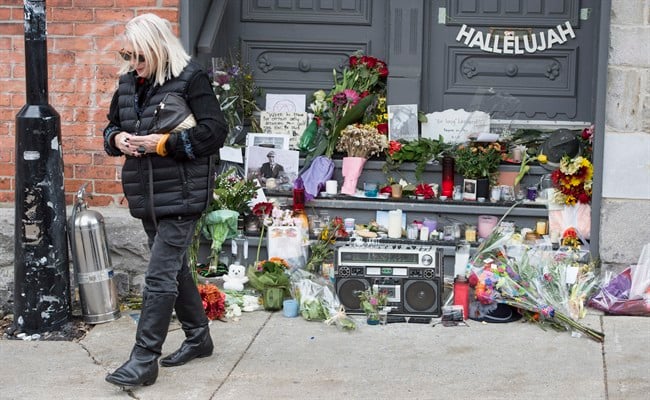 A woman walks away after placing flowers in front of the home of legendary singer and poet Leonard Cohen Friday, November 11, 2016 in Montreal. Cohen has died at the age of 82. THE CANADIAN PRESS/Paul Chiasson

MONTREAL – He would often sit at the counter of the coffee shop, wearing his signature dark suit and carrying a notebook. And before he left, Leonard Cohen would seek out every patron who had approached him and thank them.

“He’d give them a little handshake and say ‘thank you, friend,'” said Simon Rosson, co-owner of Bagel Etc, the bustling restaurant across the street from Cohen’s Montreal home.

Rosson said he once complimented Cohen on his jacket, prompting the singer to insist on giving it to him.

“He was just a soft-spoken, friendly gentleman,” he said.

Rosson was one of many Montrealers sharing memories of the legendary performer, songwriter and musician who was one of the city’s most beloved native sons.

On Friday, a steady stream of visitors stopped by the grey stone house he owned just off Saint-Laurent Boulevard, pausing to lay flowers, candles and even a fedora on the doorstep.

At the makeshift memorial, Cohen songs wafted out from a boom box manned by Daniel Aragao Cavalcanti, a young Brazilian who had stayed all night despite the November chill.

One woman brought a green candle, a nod to the opening lyric of Cohen’s “One Of Us Cannot Be Wrong” — the song she said convinced her to marry her husband when she was having doubts.

“Today is our 10-year anniversary,” said the woman, who gave her name as Fiona. “Ten years of happiness, thanks to Mr. Cohen.”

MORE: Share your memories of life and Leonard Cohen

Many who gathered Friday described Cohen as unfailingly polite and gracious in person.

“He has this way of making you feel so comfortable, I guess because he himself is very centred and he knows how to get to that essence of a person,” Natasha Ludovic said.

Others mentioned his poetry and his connection to the city they say he never forgot.

“He represents the most cultural side of Montreal, certainly the English, Jewish side,” said Renee Hebert, who came to tie a black ribbon on a lamppost outside the home. “He has a sense of humour that was particularly Jewish.”

A traditional Jewish memorial service for Cohen was conducted in Quebec on Thursday.

Cohen was born in Montreal on Sept. 21, 1934, and although he eventually lived in many places, he kept property in Montreal and returned periodically throughout his life.

The city features prominently in some of his most famous songs, including “Suzanne.”

Judy Cutler, who has been a fan since the 1960s, said she came to Cohen’s house to honour him and what he meant to Montreal.

“He represents my youth, and he represents Montreal at that time and he’s taken it into the future,” she said.

“When I hear my two-year-old granddaughter sing ‘Hallelujah,’ I know that his music and his spirit will last for generations.”

“We should be very proud as Canadians, as Quebecers and as Montrealers that such an artist lived among us,” said Couillard, who listed Cohen’s “Dance Me To The End Of Love” as a personal favourite.

He said the government wants to discuss with Cohen’s family before organizing any commemorative ceremony and lowering the flag at the legislature to half-mast.