Montreal will begin dumping eight billion litres of untreated sewage into the St. Lawrence River on Wednesday after agreeing to conform its plan to federal conditions 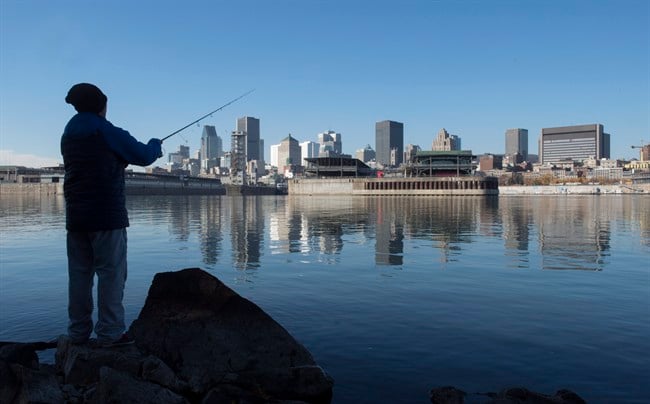 A man fishes off the shores of the St. Lawrence Tuesday, November 10, 2015 in Montreal. The city of Montreal will begin a massive sewage dump Wednesday for repairs to its sewage infrastructure, dumping 8 billion litres of untreated wastewater into the St. Lawrence over the space of a week. (Paul Chiasson/CP)

MONTREAL – The City of Montreal says it will begin dumping eight billion litres of untreated sewage into the St. Lawrence River on Wednesday after it agreed to conform its discharge plan to several federal government conditions.

Mayor Denis Coderre told reporters on Tuesday as of midnight Wednesday morning sewers in certain parts of the city — during a one-week period — will begin diverting untreated waste water away from an interceptor and directly into the river.

On Monday, Environment Minister Catherine McKenna said she would permit the city’s plan as long as it implemented a series of risk-mitigating measures to limit the effect of the sewage on the river.

Coderre says Montreal will meet all the requirements, such as keeping a closer eye on the discharge plume, creating an emergency protocol for unintended problems as well as clean-up plan for areas affected by the sewage.

The city has said the controlled release of waste water is necessary in order to complete repairs on an aging interceptor sewer that feeds sewage to a treatment facility as well as relocate a snow chute.

“The decision we are taking, as unpopular as it is, is a responsible one and its primary purpose is to ensure better protection for the river and for our water,” Coderre told a news conference.

The project has been endorsed by experts from all levels of government who agree with Coderre that a planned and monitored discharge of sewage into the river is better than an unplanned one.

Should a sewer break during the winter, spring or summer months and leak untreated water into the river the toxicity could seriously affect fish reproduction cycles, an expert panel of scientists warned.

McKenna asked the city keep tabs on the water quality before, during and after the discharge and give the data to the federal government.

But not everyone is happy with the plan — mayors of several communities voiced their displeasure at a news conference Tuesday.

“It’s the best worst case scenario,” said Becancour Mayor Jean-Guy Dubois. “Today, we’re not giving the green light, but I’m requiring that the federal government provide someone in authority who is able to answer our questions on the management of the St. Lawrence River.”

Dubois said mayors need to be consulted in advance of such decisions.

The city warned residents to refrain from flushing objects like condoms, medications and tampons down the toilet.

Asked what Montrealers can expect to see and smell, Richard Fontaine, the head of city’s waste water management, said there should be no noticeable impact given the colder water temperatures.

“You should have no odour and it’ll be very hard to see something,” Fontaine said. “There is a lot of monitoring that will be done to check exactly that, but in terms of what you’ll see or what you’ll smell, it won’t be much different than today.”

As of midnight, sewers will shut down valves and gates and divert whatever enters the interceptor into the river, Fontaine said, adding it will take eight-to-14 hours to dry out the sewer after which the infrastructure work will begin.

“Our maximum time frame is seven days, that is not negotiable,” Fontaine said. “The objective is maximum seven and if we can do better, we will.”

– with files from Pierre Saint-Arnaud.