'My stepdad had me listen to Robert Johnson’

Félix de St-Hilaire never lived through the Great Depression of the 1930s. After all, he’s only 12 years old. But the youngster from Montreal—blind since birth, a mere six months into his mother’s pregnancy—is an encyclopedia of blues history. When he listens to a blues song, within seconds he can recognize whether it’s say, Blind Blake or Leadbelly. He knows them all by heart.

As a young child, Félix was hooked on the Beatles, but wanted to go back even further into music history. “[My stepdad] had me listen to a song from Robert Johnson,” says Félix, in his native French, “and that’s how I discovered the blues.”

He got a guitar as a gift at the age of six, immediately started strumming and taught himself how to play. Without vision, “I learned to play by ear,” Félix adds.

Félix rose to Internet stardom in the summer of 2014. At a summer camp for the blind, the camp director filmed Félix as he sat down to play Everyday I Have the Blues by B.B. King. The video of Félix—wearing soccer pyjamas and playing the guitar across his lap akin to the late blind Canadian musician Jeff Healey—quickly went viral and eventually surpassed 1.3 million views on YouTube. 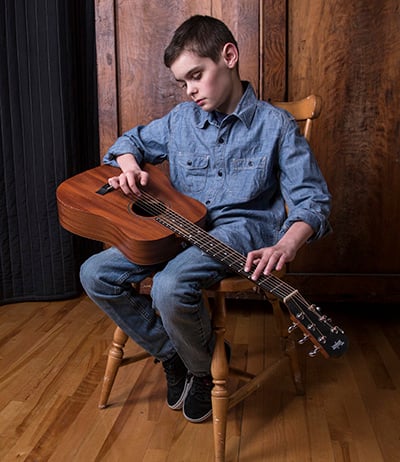 Félix is well-versed in the blues. (Photograph by Roger Lemoyne)

Félix was naturally ecstatic with the response. His story was picked up by media outlets throughout Canada, the U.S., and even by the Daily Mail and the Telegraph in Britain. And he got the chance to perform live at a benefit show at Montreal’s Place des Arts to raise money for the homeless. Afterward, 3,000 people gave him a standing ovation. But these brushes with fame haven’t changed him. After his set, he just wanted to put on his headphones—and listen to the blues. — Aaron Hutchins