City of Montreal says the process of dumping eight billion litres of raw sewage into the St. Lawrence River went off without a hitch on Wednesday 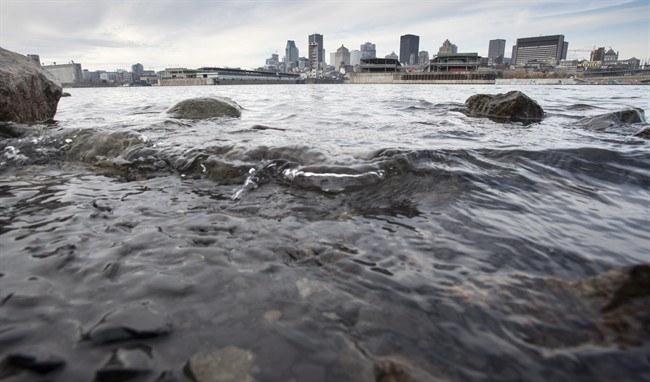 The waters of the St.Lawrence River flow past the city of Montreal Wednesday, November 11, 2015. The city has begun its massive sewage dump Wednesday, dumping some 8 billion litres of untreated wastewater into the St. Lawrence over the space of a week in order to repair parts of its sewage system. (Paul Chiasson/CP)

MONTREAL – The City of Montreal says the controversial process of dumping eight billion litres of raw sewage into the St. Lawrence River went off without a hitch as it got underway Wednesday.

Mayor Denis Coderre told reporters gathered along a shoreline in southwestern Montreal that everything was proceeding as planned and the infrastructure repair work that necessitated the discharge remains on schedule.

Certain sewers began diverting untreated sewage away from an aging interceptor and directly into the river just after midnight on Wednesday morning, work that will continue for one week.

The release of untreated waste water is necessary in order to complete repairs on an aging interceptor tunnel that feeds sewage to a treatment facility as well as to relocate a snow chute.

“Not only was there no other option, but it was necessary for the future, for the very integrity of the infrastructure,” Coderre said. “We are protecting our river and it’s better to have (the discharge) planned than just to react to a (break or rupture) where we might have even more waste water.”

He attributed the colour to phosphorus, normal even without a sewage dump.

Fontaine said the most important way to measure the effect on the river is to take quality samples before, during and after the work is complete.

City workers got a look at parts the aging sewer collector located about 35 metres underground and Coderre said that he will inspect the tunnel firsthand on Thursday.

The city took out full-page advertisements in local newspapers explaining the planned discharge is unfortunate but necessary.

Opposition Leader Luc Ferrandez of Projet Montreal accused Coderre of acting cynically and plowing ahead without having a long-term plan to deal with future events.

Coderre brushed off the criticism, saying all levels of government would sit down to address the issue.

City officials have called on people to stay out of the river, but drinking water isn’t affected.

They’re also asking residents where the sewers are discharging directly into the river to refrain from flushing certain items such as diapers, condoms and medications.

“There’s a very simple test — before you throw it in the toilet bowl, would you put it in your pool or your bathtub? That’s the question you have to ask yourself,” Fontaine said.