Fire at Peterborough, Ont.'s only mosque was a hate crime, say police 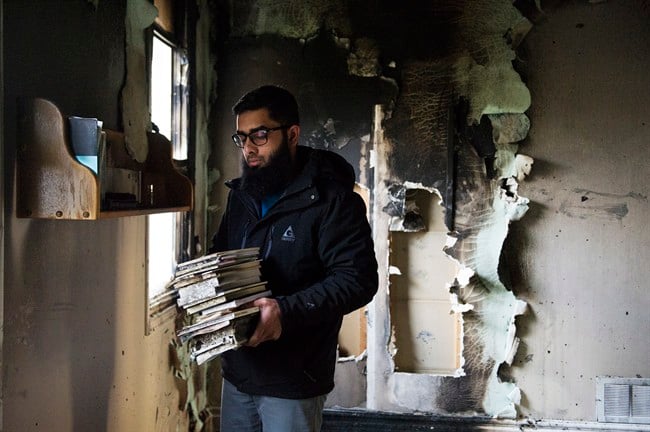 Usama Zahid removes the Quran and other books from shelves, on Sunday, Nov. 15, 2015, as congregation members clean up debris after the only mosque in Peterborough, Ont., was deliberately set on fire last night. (Christopher Katsarov/CP)

PETERBOROUGH, Ont. – Prime Minister Justin Trudeau assured Muslim Canadians on Monday that the federal government would work hard to find those responsible for setting fire to a central Ontario mosque in the aftermath of the terrorist attacks in Paris.

In a statement, Trudeau said he was “deeply disturbed” by the weekend incident that’s now being investigated as a hate crime by police in Peterborough, Ont.

Last week’s attacks on Paris that left 129 people dead have shocked peace-loving people everywhere, Trudeau said, adding it’s important for Canadians to understand “that Muslims around the world are also being persecuted regularly by these violent extremists.”

“We’re in this together,” he said.

“To the families who attend the mosque for prayer every week, the government of Canada and our law enforcement agencies will protect your rights and make every effort to apprehend the perpetrator.”

The Masjid Al-Salaam mosque, located in a quiet residential area of Peterborough, was torched on Saturday night. It’s the only mosque for about 1,000 Muslims who live in the area; about 50 families regularly attend services, as many as 300 on Fridays.

Murray Rodd, chief of police in Peterborough, Ont., told a news conference earlier Monday that any injury to one of the city’s ethnic communities is “an injury to us all.”

“We are treating this as a hate crime,” Rodd said. “The mosque in question is named — quite appropriately — the peace mosque, which fits into what is a very peaceful, very livable community.”

A small stream of passersby stopped at the mosque on Monday to express support or to donate cash for repairs.

Larry Forsey, of nearby Coboconk, went out of his way to stop by the now-closed Masjid Al-Salaam, where he hugged Kenzu Abdella, the president of the Kawartha Muslim Religious Association, and handed him some cash.

“Two wrongs don’t make a right,” Forsey said afterward. “It’s sad. People are down and they need help, then let’s help them, that’s what Canada is supposed to be all about.”

Crimestoppers says an anonymous donor has put up $10,000 towards a reward for the arrest and conviction of those responsible for the mosque fire.

A crowdfunding initiative has also raised more than $90,000 for repairs, outpacing its target. The blaze caused about $80,000 in damage, mostly due to smoke.

In Peterborough, Christian and Jewish leaders — as well as community groups — immediately offered to open their facilities for prayers. Congregants will likely pray in a United Church on Friday, said Abdella.

Some faithful used the grass outside the mosque for noon prayers on Monday.

Shazim Khan, the mosque’s imam, expressed dismay at what had happened but called it a random act.

“This is just an isolated incident,” said Khan, who has lived in the area for the past eight years. “I know this community — the people are loving, caring.”

Dave Garskey, who lives in a bungalow across the street, stopped by to offer the imam help if needed.

“Some idiot probably did it, I don’t know why,” Garskey said after chatting with Khan. “Any sane person wouldn’t do it.”

Abdella said people had been “really amazing” in the wake of the mosque fire but added that Muslims in Canada worry they could be painted with a violent, extremist brush.

“Some people may misunderstand what’s happening in other parts of the world and try to link that with Muslims here,” Abdella said. “That is really unfortunate because any time violence happens in any part of the world, Canadian Muslims like any other Canadians are offended by it and they condemn it.”

Trudeau was among several politicians who issued statements condemning the mosque fire and expressing support for the community.

Maryam Monsef, the minister of democratic institutions and the area’s MP, said the incident didn’t reflect the “warm and generous” community, while Peterborough Mayor Daryl Bennett called the assault on a place of worship a “despicable act.”

“It is our responsibility in our own lives and communities to guard against and to resist the blame and generalizations that can lead to racism and hatred.”

Investigators in Kitchener, Ont., meanwhile, are also investigating weekend vandalism at a Hindu temple there.

Dilip Dav, president of the Ram Dham Hindu Temple, said several windows at the rear entrance of the temple were shattered late Sunday night. No one inside was hurt, but they were unable to see who did the damage.