Mother of RCMP officer slain in Moncton remembers her son

'We have to remember that he was a guy who loved life.' 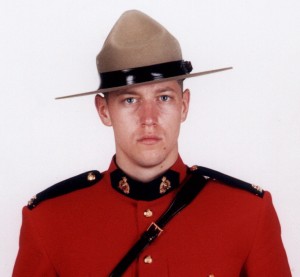 Hélène Rousseau, mother of slain RCMP officer Dave Ross, gave an interview to Radio-Canada today. A native of Victoriaville, Que., and a member of the squad’s K-9 unit, Ross was the father of an 18-month-old boy and was expecting his second child with his wife, Rachael, when he was killed, allegedly by Justin Bourque, in Moncton. Here is a translated transcript.

[I got a message] telling me to call him back because he wanted to talk about the little one. So I got home and was very enthusiastic. Even before we ate dinner I got my iPad, we did some FaceTime just after he got home from work. He told me that his [police] dog had a virus. His wife was following him around with the camera so I could see my son and my grandson. I had some really great moments. He then went to give his son a bath, and his wife showed me her belly and asked me if I thought she was going to have a girl or a boy. I said I just want a healthy baby, that’s all I hope for.

I saw a lot of love in his eyes. He had many projects, he was a lot of fun to watch. Before he hung up he said, “Bye bye mom. I love you a lot,” like he did every time when he hung up. So I have a wonderful memory of this last time. And I talked to him a week before that, too.

Reporter: You’ve lost a son. Tell me about him. What should we remember of Dave Ross?

We have to remember that he was a guy who loved life. He was passionate about hunting and fishing. He was someone who had many goals in life. He always wanted a family and four kids. He was a father who was brave, who fought for his country. He spoke a lot about his work whenever we talked to him. He had a lot of passion for what he did. So we should just remember the amazing times we had together, brother and sister, and everything else.

Reporter: Is there not a part of you who says that what has happened is unjust?

Reporter: Last question. What sort of night did you have last night?

I would say that the first night I didn’t sleep at all. All I saw were memories running through my head. My husband and I are going to go on vacation in July after our move. Dave knew about it. We would have had great times together. I was well supported all of yesterday. It was at midnight, after I heard the killer had been caught, that I was able to go to sleep with a clear conscience. After six hours of sleep, I feel a bit stronger today.