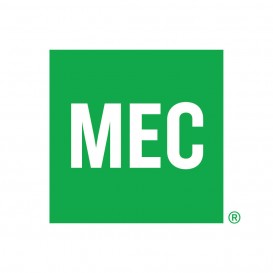 National outdoor retailer Mountain Equipment Co-Op is shedding its image of being a store just for the granola-eating, sandal-wearing, mountaineering-type.

The Vancouver-based retailer unveiled a new logo Tuesday in its first major rebranding since the co-operative was founded more than 40 years ago.

The redesigned logo refers to the retailer simply as MEC and does away with the iconic image of a mountain.

MEC’s chief marketing officer Anne Donohoe said the original logo was designed in 1974, and it was time for a facelift.

“The rebrand reflects the reality of the new MEC,” she said from Vancouver. “We’ve grown from six members to 3.5 million members over the last 40 years, many of whom live in urban centres.”

Donohoe said originally, the sporting goods retailer was formed in Vancouver to sell hard to find rock-climbing equipment to the outdoor enthusiast. Today, 71 per cent of its members live in urban centres.

Although MEC is still focused on providing equipment for backcountry hiking, skiing and paddling, it also has diversified into other areas including cycling, running and yoga.

“MEC has stayed true to its values yet is able to broaden its offering to more Canadians,” she said. “Truly, our mission is to inspire Canadians to be active outdoors.”

The new logo will begin appearing on products beginning in July, and stores will be completely rebranded sometime in September.