'Do it for him:' Alberta Mountie's sister urges mourners to live life to fullest 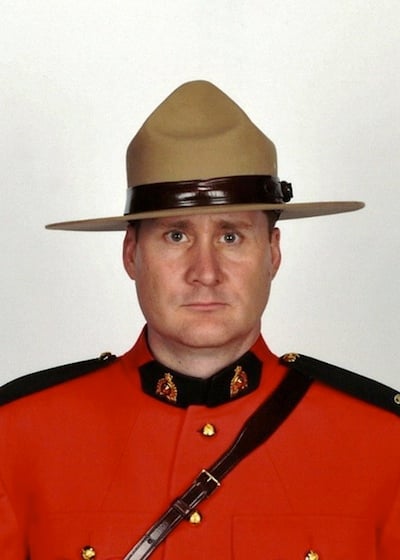 ST. ALBERT, Alta. – The sister of an Alberta Mountie told mourners at his funeral Monday that he would want them to live life the way he did — with joy, with passion and with every effort to make the world a better place.

“Over the past 10 days, there has been such an outpouring of stories about Dave and obvious love for him from the people that he has touched that I have realized he was far more than I ever imagined,” Mona Wynn said in her eulogy before thousands at a recreation centre in St. Albert, Alta.

“Dave was an ordinary man with an extraordinary capacity to make the world a better place for everyone around him.”

Const. David Wynn, 42, died last Wednesday, four days after he and auxiliary Const. Derek Bond were shot during a struggle with a suspected car thief at a casino in St. Albert. He was shot in the head and never regained consciousness before he died.

Wynn’s sister asked everyone to take up the example her brother set.

“David would want us to forgive. He was a peaceful man. He didn’t have the time to even notice a grudge much less hold one.”

Wynn’s sister remembered him as a person who brought enthusiasm to everything he did be it scuba diving, swimming, fly fishing, spending time with his family or serving his community and country.

She noted that Wynn’s organs and tissue were donated and the family has been told they will help as many as 35 people.

“Constable David Matthew Wynn, you have served this province and your country well. It is soon time for you to grab your fishing rod and head for the Miramichi, where I know your father will be waiting for you once more. We wish you Godspeed and tight lines.”

It was standing room only as more than 7,000 people came to pay their respects. The mourners included more than 2,100 Mounties, police officers, military members and first responders from communities across Canada.

Their uniforms of scarlet, green and different shades of blue brought colour to the hushed arena where friends, family, guests and dignitaries gathered in a solemn show of support for Wynn’s widow, Shelly, and three teenage sons. The eldest, dressed in his cadet corps uniform, had marched in the procession for his father before the funeral.

Duncan MacInnis, Wynn’s uncle and a retired Mountie, choked up as he spoke to the crowd about their grief.

“The sudden and violent death of David has left everyone in the policing community and the general public suffering a profound loss,” MacInnis said.

“As a family, as a police force and as a community, we mourn and grieve our fallen hero.”

The Rankin Family from Nova Scotia, in recognition of Wynn’s Maritime roots, performed two songs in his memory, including their well-known “Fair Thee Well, Love.”

Earlier in the day, the skirl of bagpipes filled the air as a procession of police officers, military members and first responders wound its way through the streets of St. Albert.

A riderless horse, a pair of brown boots turned backward in the stirrups, led a black hearse carrying Wynn’s coffin to the funeral service.

Mounties in the procession came from across Canada and from as far away as Newfoundland and Nunavut. A handful made the trip from Bridgewater.

Hundreds of spectators, who were encouraged to wear red, lined the procession route under sunny skies and unseasonably warm temperatures. Many were holding Canadian flags and one giant flag was strung from the erected ladder of a fire truck.

Thousands of white ribbons were tied to trees and poles along the route.

“We lost an important person in our society and we just wanted to be here to pay our respects,” said Beverly White, who lives about five minutes from the shooting scene and attended the procession with her grandson. “It’s going to be an emotional day.”

Laredo Nault, 14, travelled from Legal, Alta., with a quilt emblazoned with the quote: No greater love than to give one’s life for another.

“It kind of popped up in our minds — an officer gave his life away to protect our country and I think that quote represents it good,” he said.

Bond, who was shot in the arm and torso, survived the attack, but faces a long recovery.

In Ottawa, the House of Commons held a moment of silence as the procession began.

The flags at the Alberta legislature flew at half-mast from sunrise to sunset.

Mounties were also remembering Wynn at mini-memorials at detachments across the country.

Near the end of the service, RCMP senior officers gave each of Wynn’s sons an article to remember their father by, including his belt and his Stetson.

Commissioner Paulson presented Wynn’s widow with the crisply folded Canadian flag that had been draped across her husband’s coffin.

She took the flag and held it tightly across her heart.