Mulcair, the niqab and 'a dangerous game'

Amidst all the scripted talking points in the final leaders debate, the NDP leader went on a bold but risky offensive 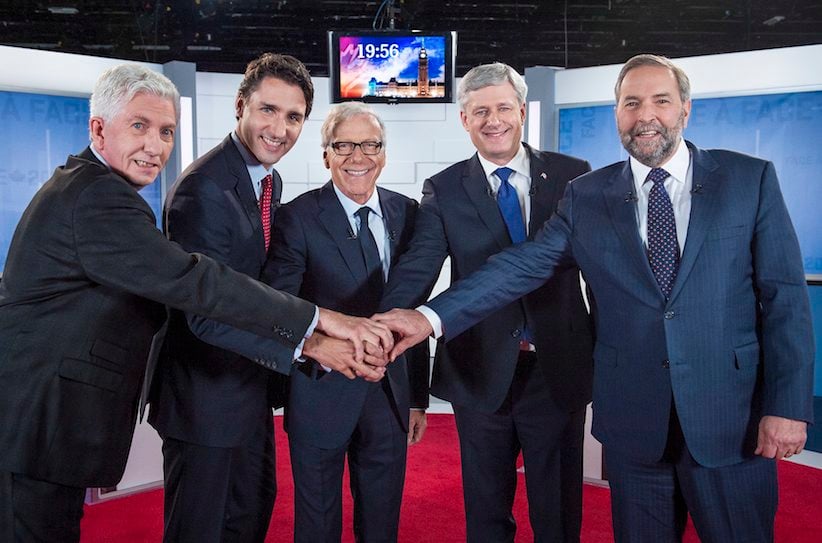 The niqab debate, which hijacked the election campaign last week, would be a waste of air were it not so damaging. Brought forth by the Conservatives to all corners of the country, then further exploited by the Bloc Québécois in Quebec, it had all the elements of a classic political scapegoat: take an unfamiliar cultural or religious practice, magnify it to the point of distortion, then play on the resulting fears and prejudices of the voting public.

It’s gross stuff, reminiscent of the Parti Québécois identity campaign of 2014, and it deserves to be shouted down. Tonight, finally, one of the leaders did just this. Tom Mulcair’s statement during the fifth and final election debate on those few square inches of face-covering cloth deserves to be quoted in its entirety.

“The way Mr. Harper says it, it’s like there are people here that are pro-niqab. No one here is pro-niqab. We realize that we live in a society where we must have confidence in the authority of the tribunals, even if the practice is uncomfortable to us. If a journalist says something that is uncomfortable to me, I still support his right to say it. Mr. Harper, you are playing a dangerous game of the kind I’ve never seen in my life.”

Since the outset of the campaign, the NDP leader has been dogged with accusations of political pandering—of changing his message depending on the audience. Yet here he was in Quebec, the NDP’s power base and the place where anti-niqab sentiment is at its highest, saying exactly what much of his electorate doesn’t want to hear.

It was also a rare, seemingly unscripted departure from a night of feigned outrage and talking points regurgitated from the last four debates. Justin Trudeau offered mentions of making “the one per cent pay” or the “middle class.” For his part, Harper performed exactly as he had in the previous four debates. He was the happy target, prefacing nearly every answer with a shrug of his shoulders and an upturn of his palms. “Franchement, monsieur Duceppe,” he’d say. “You know that’s not true.” It was like watching Ronald Reagan say “there you go again” to Jimmy Carter, except in French and in triplicate.

As with the niqab debate, Duceppe mirrored the Conservative Party’s hawkish take on world affairs, making light of Trudeau for the Liberal stance against Canada’s participation in the ISIS bombing mission. “You have to intervene. You can go there with a bouquet of flowers and a bag of provisions, but I don’t think you’ll please the fanatics there.” At the same time, Duceppe was enamored with the foreign policy of Liberals passed—the sovereigntist leader name checked Pearson and Chrétien—and said he didn’t recognize Canada in Harper’s take on world affairs.

It’s an odd hypocrisy for the erstwhile pacifist Bloc leader: he’s against the Conservatives, yet on issues of Islamic threats, existential and otherwise, he’s violently in agreement with Stephen Harper.

But back to Mulcair. In the throes of the 2014 Quebec election, when the Parti Québécois introduced a bill that would ban religious head coverings of all sorts from Quebec’s civil service, it was Trudeau who denounced it as an unseemly electoral gambit. Mulcair remained largely silent. “We don’t want to give ammunition to the separatists,” his aide told me at the time.

The PQ ended up losing the election. As it turned out, the scapegoating of religious minorities wasn’t boffo electoral fodder after all. Quiet then, Mulcair was anything but tonight, giving Conservative and Bloc attempt to capitalize on fear the full-throated condemnation it deserves. Mulcair is nothing if not calculating, and perhaps he has calculated that the niqab isn’t nearly the electoral millstone some of his opponents hope. That is a hell of a gamble. It is also an honourable one.