‘My name is Rachel Notley’ 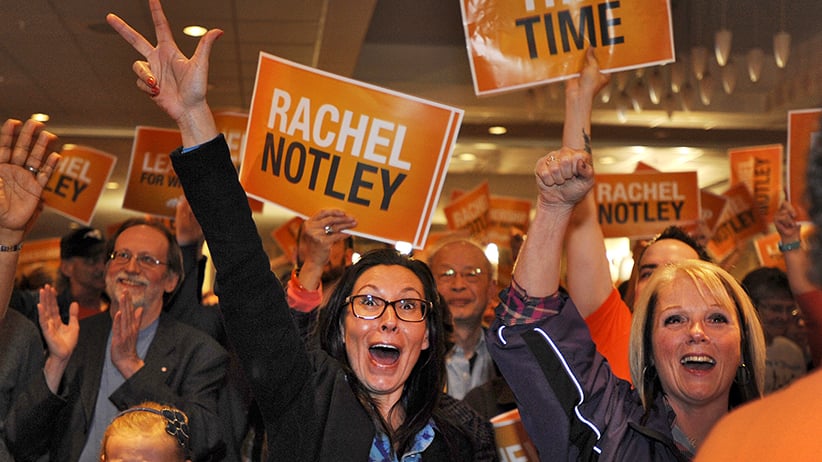 The Alberta NDP leader still had nothing better to do, at that stage in the campaign, than to sit down with an Ontario-based pundit whose readers could, in the main, not do much to help her. She was defending the odd thesis that a New Democrat could aspire to govern Alberta.

“It’s been popular to depict Alberta as this sort of right-wing place off in the West,” she said. “But that’s not what it is. There’s a lot of different issues on which Albertans articulate as progressive an approach as what you might see in downtown Toronto.”

There have, of course, been signs of the change Notley claimed to detect for several years in Alberta. The election of Naheed Nenshi and Don Iveson, hardly rock-ribbed Conservatives, as mayors of the two largest cities. The rise of alternative voices, like the proudly weedy Alberta Views magazine. All those waves of migrants from the rest of the country who were supposed to represent a big shift in values and power toward this bastion of entrepreneurialism, this businessman’s paradise where you could do a deal on a handshake.

Maybe that isn’t what shifted.

“This has been evolving over time,” Notley told me at that lunch. “It’s the youngest province in Canada. There’s lots of immigration.” And second- and third- and 10th-generation Albertans didn’t always hew to stereotypes either, she added. The challenge was giving Albertans who held those values—not nearly all Albertans, of course, maybe not even a majority, but at any rate a potentially formidable chunk of the electorate—the will to vote according to their values.

In the long wait for the polls to close on Tuesday, a senior NDP strategist told me how Notley managed to capitalize on this extraordinary moment in the province’s history. Of course it is not entirely, or perhaps even mostly, a story about Notley’s mastery of politics. It is also about the mess Jim Prentice made of everything.

“Three elements combined to break Jim Prentice’s brand,” this strategist, who spoke on condition of anonymity, said. “The budget; the deal with Danielle Smith”—the leader of the further-right Wildrose party, who left her party to join Prentice’s along with several of her MLAs—“and the ‘Look in the mirror’ comment.”

Until the mass Wildrose floor-crossing in mid-December, Prentice’s arrival in provincial politics seemed to be going spectacularly well. He made some moves to demonstrate concern for taxpayer dollars, like selling off the provincial government’s fleet of aircraft and forcing cabinet ministers to take a pay cut. The floor-crossing was an expression of late-2014 conventional wisdom: Everything was breaking Jim Prentice’s way. 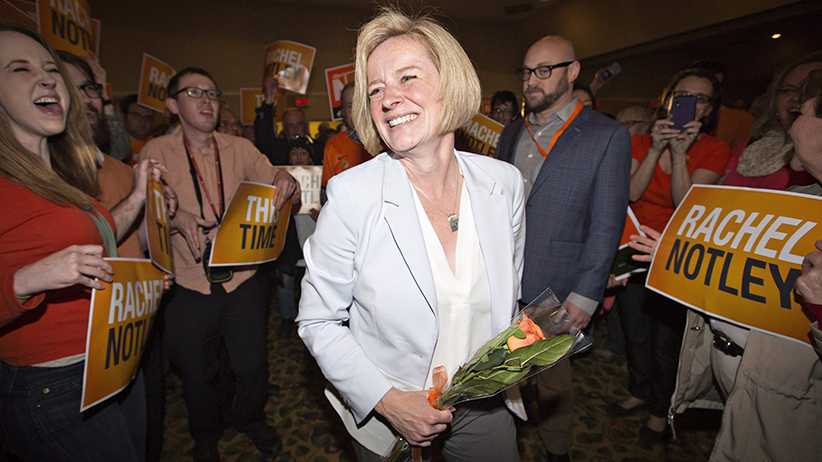 But the floor-crossing sent the wrong message. “It looked like Prentice was trying to game the election and win it without earning it,” the NDP strategist said. The “Look in the mirror” comment, in which Prentice told an interviewer that Albertans should take some blame for the province’s straitened fiscal circumstances, looked like an attempt to shirk Conservative responsibility for the “ridiculous circus” of Prentice’s predecessor, Alison Redford.

And the budget, which raised 50 taxes on individual Albertans but didn’t touch corporate taxes, “set up the NDP campaign beautifully.”

Notley, whose father was a popular provincial NDP leader in the 1980s when he died in a plane crash, was hardly a perennial fixture in the province’s politics, but at least she had been around more consistently than Prentice. When Raj Sherman, leader of the provincial Liberals, quit the party leadership at the end of January, she saw a chance to consolidate her appeal. “It was evident that there was going to be a clearer shot at the progressive-left vote than we’ve had in a long time in Alberta,” the strategist said.

So on one hand, Albertans had a shaky economy and a premier who was new to provincial politics and had trumpeted his arrival with some spectacularly tin-eared moves. On the other you had a personable leader with roots in Alberta politics, suddenly able to blast her message past her party’s long-time Liberal rivals.

It was at this point that Jim Prentice called the election a year earlier than he needed to. He said he wanted a mandate for future actions, but the vote became a referendum on all the odd and maddening things he’d just done and said. When Albertans started to cast about for an alternative, they found only one party that was trying to be that alternative.

Gutted by the Danielle Smith defection, missing more than half its parliamentary caucus, Wildrose would have surprised few people if it had simply folded its tents. But Brian Jean, a former federal caucus mate of Jim Prentice’s from Stephen Harper’s Conservative party, won the Wildrose leadership. Jean’s victory in that race came very soon after the death of his son, and endeared him to Wildrose voters. By focusing on a few simple mantras, including the notion that Wild­rose would never raise any tax, Jean gave definition to a party whose existence was threatened.

Or more precisely, she was offering herself as premier. That’s how she’d begin her campaign speeches. “My name is Rachel Notley and I’m running to be your premier.” The phrasing was deliberate, designed to encourage voters to compare her qualities to Prentice’s.

“All the PC ads featured Prentice heavily,” the NDP strategist said. “In effect they were really NDP ads, because they were asking voters to look at Jim Prentice, which is what we wanted, too.”

Prentice was sure he would profit from a comparison between himself and any other leader. By the time of the mid-campaign leaders’ debate, he knew Notley was his chief opponent. He made the mistake of turning on her, practically ignoring other party leaders so he could force confrontation after confrontation with Notley.

Another mistake. In rehearsals for the debate, Notley’s staff had prepared her for two very different dynamics. Maybe Prentice or one of the other leaders would turn on her, try to rattle her. So they practised things that way. Or maybe Prentice would be distant, emotionally cool, speaking into the camera and through it to Albertans rather than letting himself get hauled into any scraps with these mere mortals from the other parties.

The thing that was really clear from the debate prep sessions was that Notley was ill at ease debating a calm and regal opponent who mostly ignored her. She couldn’t find a way into the conversation. But when attacked, “she just comes right back at you,” the strategist said. “She is spring-loaded to be an effective debater. Just naturally.” The stress of confrontation got Notley’s back up, but in ways that were dangerous for whomever was in her face, not for her.

So when Prentice turned to face Notley at the first opportunity in the debate, the strategist said, “I thought, ‘Oh, you don’t know what you’re doing, my friend.’ ”

Notley herself has only led her party since last autumn. A pedigree isn’t personal experience. She has a lot of learning to do, fast. Her caucus is full of rookies. The economic crisis that pushed Prentice into some hasty and dumb decisions persists, and would challenge any Alberta government now. And the Albertans who didn’t vote NDP, a majority of the electorate, will not be pleased that the party now forms the government.

But sufficient unto the day is the evil thereof. The challenges facing Notley are the challenges of government, which are so much better than the challenges of opposition that nobody ever voluntarily swaps the latter for the former. There is a non-conservative strain in Alberta’s rich and complex political culture. It is a mug’s game to debate whether it’s durable or represents a majority or whether it’s up to the challenges Alberta faces. It was enough to topple a dynasty and elect a solid majority government, and now it gets a chance to show the world what it’s made of. Sometimes you get to make history. I suspect it won’t be as easy to get lunch with Rachel Notley next time I’m in Alberta.

Colby Cosh: Why the Orange Revolution is not about Rachel Notley

Meet the new premier: What you need to know about Rachel Notley