Premiers from Nova Scotia and Newfoundland have asked for disaster relief 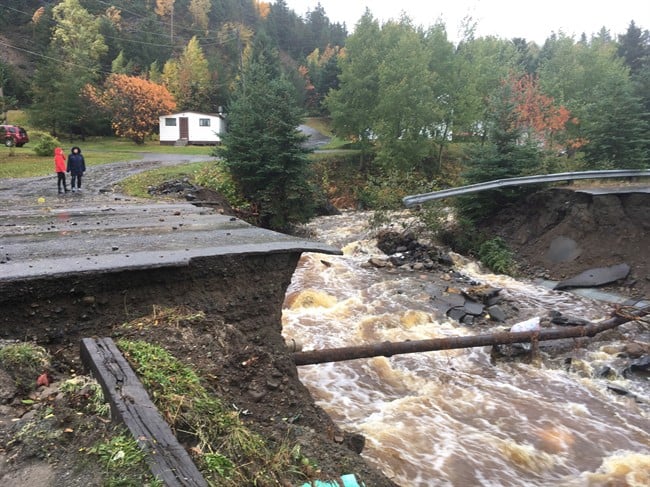 The effects of the tail end of Hurricane Matthew are shown in this images from Norris Arm, Newfoundland on Tuesday October 11, 2016. Communities in Nova Scotia and Newfoundland are facing a costly cleanup from widespread flooding damage after a storm brought torrential rain to the region over the long weekend. (Paul Daly/CP)

SYDNEY, N.S. – Nova Scotia’s premier says he could not believe his eyes when he saw the damage from the powerful storm that pummelled much of Atlantic Canada over the long weekend.

“When you see what’s happening, trees being uprooted and taking roads with them, roads being washed out completely, the actual force of that water must be phenomenal,” Stephen McNeil said Wednesday during a visit to Sydney, the largest community in Cape Breton.

Both McNeil and Newfoundland Premier Dwight Ball arranged tours of the areas in their provinces worst hit by the weekend storm, which was associated with the remnants of Hurricane Matthew.

The provinces face a costly and lengthy cleanup, as power crews worked to restore electricity and schools remained closed in some areas. Both premiers have spoken to the prime minister about disaster relief.

“Today we are seeing many of our communities in distress,” Ball said in a statement.

He said the ability to gain access to communities was still a major issue for towns such as St. Alban’s, Hermitage-Sandyville, Morrisville, Seal Cove and Harbour Breton.

“Other communities are seeing water supply issues due to significant increases in river water,” Ball said.

Cecil Clarke, mayor of the Cape Breton Regional Municipality, said in an interview it is the worst rain-related disaster to hit his community in his lifetime.

It has severely damaged dozens of roads, taken out municipal bridges, destroyed parks and caused extensive damage to flooded homes in several communities in the municipality, he said.

The water supply has remained intact, but there has been damage to waste water and a major water main break, the mayor said. Three centres have been set up by the Red Cross to provide shelter and food for residents whose homes are badly damaged.

Clarke said the municipality will be applying for disaster relief assistance, and he is confident it has easily reached the minimum $3 million threshold in damage that would qualify it for the relief.

He urged citizens to keep receipts and document the damage in order to apply to insurers and disaster relief agencies for assistance in restoring their homes.

He said many homeowners don’t have insurance and will be waiting to hear what kind of disaster relief they can receive from the province.

“We do not want to have mildew and mould issues going forward. We’re going to undertake a major cleanup to get things out of peoples’ homes as quickly as possible,” he said.

“We’re mindful there are people without resources, and winter is coming.”

The Cape Breton-Victoria School Board announced Wednesday that students from Brookland Elementary school in Sydney are being temporarily relocated to another school due to water damage to the building, after the community received more than 200 millimetres of rain.

In Newfoundland and Labrador, crews worked to reopen the Trans-Canada Highway in Terra Nova National Park, where a section of the highway had washed away, cutting off southeastern Newfoundland from the rest of the island.

In the western region Route 480 to Burgeo remained closed and the province said work to repair damage was expected to take two weeks to complete. In central Newfoundland 13 roads and highways remained closed or were down to one lane.

Clarke said the weather is a reminder that climate change is contributing to more intense storms on the East Coast.

He said the heavy rain caught people off guard, as most people were expecting that after weeks of dry weather the rainfall would be absorbed without difficulty.

It predicted the majority of customers would get their power restored by 11 a.m. Thursday, although it said that could take until Friday for some smaller pockets of outages.

The utility said it had 122 power line crews and 27 tree trimming crews working on the eastern mainland and in Cape Breton.