N.W.T. woman used a bear to shake a stalking wolf

Stalked by a wolf, Joanne Barnaby used her survival instincts to bring the hungry creature into the line of a bear seeking her cub 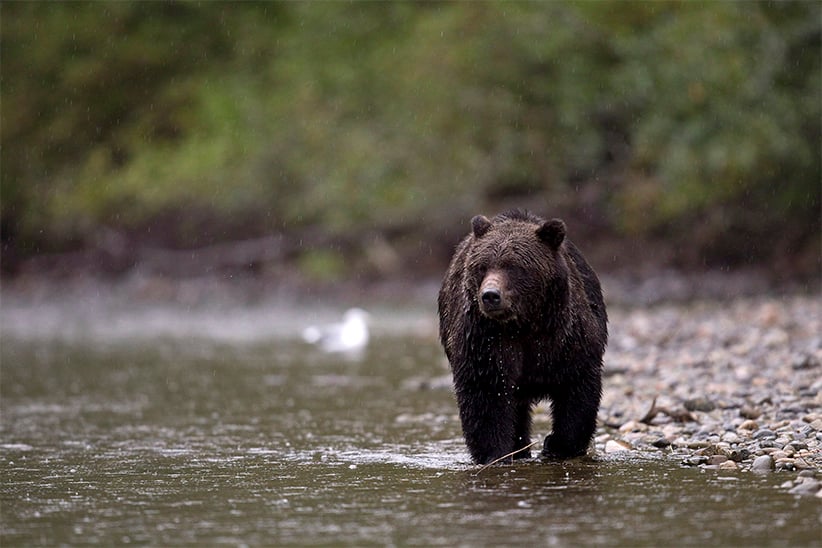 A grizzly bear is seen fishing for salmon along the Atnarko river in Tweedsmuir Provincial Park near Bella Coola, B.C. (Jonathan Hayward/CP)

The sound of a mother bear calling for her cub is normally a warning to get the heck out for anyone in the bush.

But for Joanne Barnaby — hungry, tired, thirsty, mosquito-bitten and stalked by a wolf — it was a lifesaver.

“I knew what it was right away,” said Barnaby from her home in Hay River, N.W.T.

Barnaby’s tale began last Friday when she and a friend were hunting for morels in a fire-swept patch of forest. At the end of the day, she was about to return to her truck and her companion when she heard a low, threatening snarl.

It was a wolf. A tall, black one just a few metres away.

“I heard him before I saw him,” said Barnaby. “All four legs were spread out. He was in a very aggressive stance.

“He looked really rough. He looked old and he was really skinny. But he was a big wolf.”

Barnaby’s dog Joey — a black, knee-high crossbreed with some terrier and Rottweiler in him — has chased off bears in his time and tried to scare the wolf away. No luck.

“Joey got scared. He started whining and I coaxed him back next to me. He never left my side after that.”

Barnaby and Joey tried to make it back to the truck just over a kilometre away.

But the wolf was having none of that. He blocked their way, pacing and growling in front of them, herding them away from the highway.

Barnaby and Joey tried to edge their way back to safety. They walked well into the long northern twilight, over burned-out bush, willow tangle, rocks and a miasma of mosquitoes so thick Barnaby found it hard to think.

“It was pretty crazy. It was hard to concentrate and make decisions. They were everywhere — inside my ears, inside my eyes.

“At one point I stopped and did some prayers around those mosquitoes and asked my ancestors to help me forget about them. That helped a lot. I quit spending so much energy fighting them.”

Barnaby kept oriented using the sun and the clock on her cellphone, so she knew the wolf was herding her parallel to the highway. He was, she guesses, waiting for her to drop.

She paused by a lake to drink water and massage cramps out of her legs. “I felt for a few moments there I was losing it.

So she started to talk, first to her son who died in infancy, then to another son who’s now a young man, then to her dead father and finally to all the people she loves.

“I told them what was so special about them and what I loved about our relationship and how much more I wanted to say to them. It helped me make that really powerful choice to keep going.”

The walk resumed, on and on, Joey by her side, wolf just out of sight, until there came a distant braying loud enough to be heard over the mosquito drone. Barnaby had heard it many times — the sound of a mother bear calling for her cub, followed by the cub’s response.

“I started to pray about that, to make the right decision. It just came to me really clearly to walk toward the cub, knowing the mama was also going toward the cub.

“She was somewhere behind me and so was the wolf. I was hoping they ran into each other before mama bear found me.”

And that’s what happened.

“I heard a bunch of crashing in the bush and then I heard some major growling from the bear and some yelping and howling from the wolf. Mostly yelping.”

Barnaby and Joey took off for the highway.

The ordeal wasn’t quite over. The pair ran into an impassable stretch of deadfall and had to detour for kilometres. It was 4:30 a.m. when they reached the road, 12 hours after Barnaby heard that first growl.

“They got out of the truck and gave me big hugs. I couldn’t believe they didn’t have any mosquito spray for me.”

It was a few days before Barnaby could get her feet back into her shoes. Her back’s a little sore where she fell on it. Otherwise, she’s fine.

Barnaby said she won’t go back into the bush without a gun.

But she will go back.