Naheed Nenshi put out a fire. Now he now must deal with the Flames. 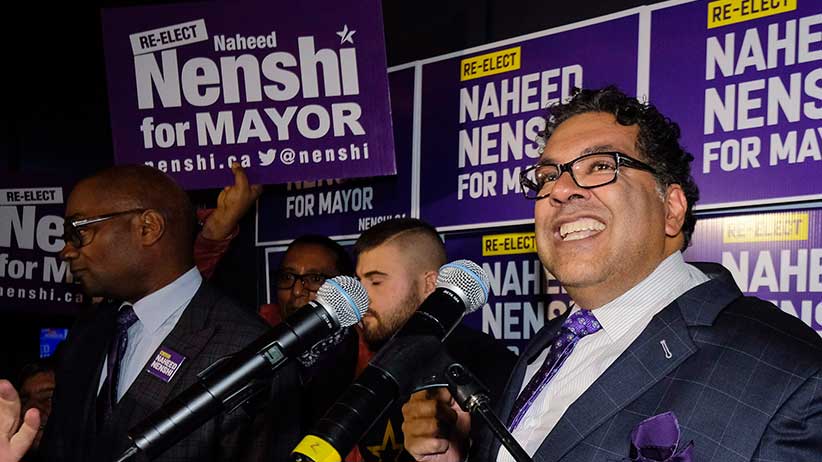 The first salvo in the battle that will likely define Naheed Nenshi’s third term as Calgary mayor came in a tweet that only survived in this world for a few minutes. It was from Sean Kelso, the Calgary Flames director of communications, who, given his role managing his way out of PR messes, should know better than to concoct his own.

“I can’t believe it YYC (Calgary),” he tweeted. “Having @nenshi as mayor is worse than @realdonaldtrump as president. #arrogant #bracefordisaster #outoftouch”

Kelso deleted the rant after media noticed what the hockey organization’s Number 2 communications staffer had said, shortly after the mayor won a third term, vanquishing the fears that emerged during the campaign that the popular mayor would face a surprising fall.

Now Nenshi will remain Calgary’s grand-talking mayor through 2021. And the Flames brass will have to negotiate the fiscal deal for a new hockey arena with him if they wish to stay in Calgary (spoiler: they do, even if Trump-governed jurisdictions like Seattle seem more pleasant to Kelso). After engaging in a bunch of campaign-season trash-talking with Nenshi about whether the two sides can come to reasonable terms, it seems Nenshi’s pitch was patently reasonable to most Calgarians and the Flames’ ownership pitch patently reasonable to most, if not all, of the Flames owners. When asked about this first opening slight from the Flames official, issued before Nenshi’s victory speech, the mayor showed a mixture of restraint and trademark swagger.

They’re entitled to their own opinion, Nenshi replied. “Fifty-one or -two or -three per cent of Calgarians probably disagree with him,” he couldn’t help adding, a nod to his voting share as ballots were still being tallied by hand after midnight.

This election seemed like it should have never been close, with a mayor who had been celebrated a Harvard-pedigreed charismatic leader; who came out of nowhere in 2010, was the inspirational flood hero in 2013, and … well, wasn’t steering the city directly into the crags (the oil economy took the lead there). He hadn’t done enough to tick people off enough to deserve an ouster against flimsy candidates in 2017.

Then a huge outcropping of his chief rival’s signs began springing up on lawns throughout Calgary, and a jarring poll showed a tidy lead for Bill Smith, a rather drab former Alberta Progressive Conservative party president. And as we started trying to rationalize a potential Nenshi loss, we came up with plenty: a conservative corps that had lost the province and country, and was keen that their air punches would actually make contact with any progressive face within arm’s length; high unemployment and a hollowed-out core, accompanied by the accumulation of several years of an expansionist council’s property tax hikes; and a gathering understanding among those in the city’s business class, and well beyond it, that Nenshi had a bad habit of fraying relationships and trying to debate-club-champion his way through arguments.

In the campaign’s waning days, the Nenshi campaign shifted to the defensive, bidding to change the ballot question from arrogance and tax hikes to Bill Smith’s utter lack of ideas and job preparedness. Nenshi’s boosters cast Smith as the anti-Nenshi, in other words. Smith’s people did so, too, offering up meat and potatoes (spending: bad! taxes: bad! finding better ways, somehow: good!) instead of grand mayoral ambition. Nenshi didn’t offer much in the way of fresh ideas or ambition for his third term, either, but he won points for qualifications, and for passion. Calgarians, it turns out, are still willing to pay a bit more for a city they’re proud of, and a mayor who expresses pride in their potential.

Had conservatives put forward a competent mayoral candidate—perhaps MP Michelle Rempel or one of many former provincial Tory cabinet ministers with nothing better to do—the night would have been over more quickly. That they promoted somebody who was so light on policy and so nonchalant about details speaks to how little actual regard many Alberta conservatives give to the municipal level of government, that realm of drone-on council meetings and lengthy quibbles over urban planning issues and transit project routes. Nenshi obsessively loved that sort of stuff before he was mayor, and loves it still, and Calgarians still find that love sufficiently infectious to give him another shot at running things—or at least they had more faith in him than somebody who would’ve had to learn on the job what his job actually entails.

It didn’t help, either, that Nenshi (and the Flames’ terrible tactics) forced his rival to curry favour with the ardent Flames fans who wanted little public expense spared to keep the Flames lest they lose the owners’ support for keeping the team in the city. And the debate about whether or not Calgary should host the Winter Olympics in 2026 was still too young, too undeveloped, for either Nenshi or Smith to stake out clear lines in it—much will depend on whether the International Olympic Committee can figure out how to keep it from becoming a giant cash bonfire for a host city. The arena, though, will be the much better test of Nenshi’s mettle. From NHL commissioner Gary Bettman and Flames owners, on down to the club’s late-night-tweeting staff, Nenshi has irritated them to extreme levels, and the mayor will have to resist temptations to add to the toxicity of the conversation. If he continues to use his single-digit victory margin over a little-known, inexperienced opponent, that won’t help. If the cryptic threats to relocate the team turn genuine, he’ll really learn what a divided populace looks like. He’ll also have to quickly bring the new council onside with his bargaining position, which he did well before the election. But this close brush with defeat will have shown council colleagues that he’s not the titan Calgary once thought.

Meanwhile, election night showed there’s another big loser, aside from the Flames—one who didn’t say a peep during this election, and wasn’t on the ballot, but almost played a decisive role in felling Nenshi: Rachel Notley. Calgary conservatives can’t yet knock off Alberta’s NDP premier, or Prime Minister Justin Trudeau, so they took aim at the progressive mayor. They didn’t bring him down, but a historically popular mayor came unexpectedly within 10 percentage points of losing to a guy who lacked experience or policy chops; in 2019, Notley will be a premier who hasn’t been popular in Calgary since the day after she got elected, facing either Brian Jean or Jason Kenney, both experienced and capable politicians. A landslide for Nenshi could have boded well for Notley; this outcome showed instead how much conservative hunger there is in Alberta’s largest city.

Notley can, however, take solace in the fact that there remains a friendly—albeit oft-bristly—moderate in the mayor’s chair. Calgary gets four more years of his motivational speeches, incessant quips and optimistic vision, too. The Flames get to deal with a communications official who badly miscommunicated, and the mayor who was the target of that blast who’s now tasked with playing fairly with them.